REVIEW: A Prior Engagement by Karina Bliss

This was such an interesting plotline.  Juliet Browne has been playing the mournful fiancee to presumed dead SAS soldier Lee Davis.  But Davis comes back to life and confronts Browne because not only is she not his fiancee, she turned him down when he asked her.  And now she is living in his house, driving his car, inheriting his money (he had left half to her and didn’t have time to change his will before he deployed again).  Even worse, all his friends have taken to her and enfolded her into his group.  In another book, Juliet would be the villain and to Lee, she kind of is. 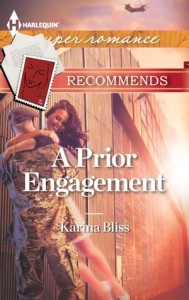 When I started this book I wondered how Juliet was going to explain all of this and whether a believable romance could be pulled off.  Because of the talented writing, it’s a yes to all of these things.  When Lee is reported dead, Juliet becomes absorbed into the family of survivors, particularly Lee’s own family and his close knit set of friends.  When his best friends were going through his effects, they found the $10,000 engagement ring Lee had bought Juliet and gave it to her.  Juliet didn’t refuse it; she was too busy comforting her best friend Claire who had lost her own husband and mourning the loss of Lee.   And then one thing happened after the other and it was a lie too big for Juliet to clear up.

Lee’s friends and family have hugged her so close to their bosom that they set up Juliet with another man, Mark.  The book opens with Juliet’s consummation in this newly budding relationship only for Juliet’s phone to blow up with text messages from all of her friends demanding her she call them back RIGHT NOW.

Lee had been captured and imprisoned by the Taliban and found in a hole by some American soldiers.  Lee had spent his time in captivity dreaming of how he would win Juliet back but his feelings are turned bitter when he discovers her deception.  Upon his return to New Zealand, he pretends to have amnesia about his proposal and pretends like they are engaged.

Everyone’s actions are so authentic and genuine in this book. Of course Juliet’s lie becomes so big it is unmanageable.  Of course Lee comes back angry.  Of course he feels resentful toward his family embracing Juliet. And, of course, what led them to fall in love during a six week whirlwind relationship that was shuttered by Lee’s supposed death only smouldered, banked until they were together once again.

This book is the last in a series of four SAS soldiers, closer than brothers.  The previous books in the series are all good but you don’t need to have read them to enjoy this one.  However, for long time readers of the series, we are rewarded with seamless integration of the prior characters as Lee struggles with the changes around them including the marriage of Claire, his best friend’s widow, to another friend in the unit.

“No.” The first bite of steak caught in his throat and he washed it down with the rest of her champagne. “You dating another guy doesn’t matter in the scheme of things, honey. Not after I’ve spent nineteen months dicing daily with the big issues like mortality, whether there’s a God and what the hell I was going to use for toilet paper.”

He stopped sawing at his steak. Stupid to think he could handle a lump of fried meat anyway on his stomach. “You thought I was dead. Really, this is no different than Claire falling for Nate, right? And everyone’s cool with that.”

Lee painted a reassuring smile over his resentment. “And yesterday you said yes to marrying me, so clearly I’m the winner here.”

Jules started to speak, but he laid a finger on her lips. Such warm, soft lips. Reunion fantasies with this woman had kept him alive. And he kept caring, he kept damn well caring. “We agreed on the way home yesterday that neither of us wants to revisit the past.” This explained why Jules didn’t want to talk about what—or who—she’d been doing.

“All that matters is the future.”

And a little frontier justice. For his own sake he had to speed this up, tighten the screws on her conscience. And he knew just the way to do it. – pg. 59

Lee’s return home isn’t just fraught with terrible memories.  It’s that he’s no longer the gorgeous man who stopped ladies in their tracks. His friends and family have gone on without him.  Even acquaintances don’t remember him.  He hates being pitied as the rescued soldier and he hates that he still loves Juliet.  And Juliet?  Her reasons for turning him down were valid.  She worried about his commitment and when he returns, she feels justified in it.

Perhaps the biggest flaw in this book is that while the emotions are deep in this story, sometimes I felt too detached.  Juliet, in particular, didn’t draw me in as much as I wanted to be drawn in.  Perhaps it was just a function of who Juliet was. She is scared of commitment and of feeling and held herself somewhat aloof, even from the reader.  However, I loved this series and was thoroughly entertained by this latest Blissful entry.  B