Although I didn’t care for or even finish your popular historical romance Lord Ruin, I picked up its sequel, A Notorious Ruin, because I have enjoyed some of your more recent historicals, most especially Scandal. 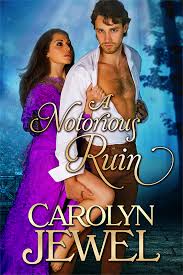 Lucy Wilcott is a widow of only twenty-three years, and beautiful at that. She attracts a lot of male attention, but doesn’t set her cap for any of her suitors. When she was in her late teens, Lucy married, as many of the upper classes would see it, beneath her station. Since her widowhood, her scandalous marriage was partially hushed up, but some still whisper about it. As for Lucy herself, she is not permitted to talk about it at all, not even to her sisters.

Lucy and her younger sister Emily live under the roof of her father, who is an irresponsible spendthrift. Mr. Sinclair is forever running out of money despite having been bailed out more than once by his wealthy sons-in-law. Lucy tries to manage their finances but her father makes it very difficult by, among other things, inviting guests to their home and insisting on entertaining them in high style. Lucy dreams of the day she can get a cottage of her own, and finds a way to secretly earn a little money to put away toward this dream.

The Marquess of Thrale is one of Lucy’s father’s houseguests. He has come to the neighborhood to box and to observe the matches at the local boxing academy. Upon arriving the Cooperage, the home of Lucy, her father and her youngest sister, Thrale notices how lovely and gracious the house is. Thrale has recently freed himself from his late father’s debts but the process of doing so has made him ruthlessly parsimonious with his own household, and he begins to realize that he has gone too far.

Thrale finds Lucy beautiful but he believes her to be a vapid creature. That’s because Lucy does all she can to act the part of the airhead in order to offset her attractiveness and repel the men who might otherwise proposition her. But in a moment of upset with her father, Lucy slips up, and Thrale begins to see though her act. That scene, like much of the book, is beautifully written.

The third of the Sinclair sisters swept in, and this was a surprise, to see her full of life and energy. Roger trotted behind her. She did not see him yet, and he stood, book in hand, bereft of coherent thought.

Her air of abstraction was gone and in its place was focus and deliberation. A stranger to him. This creature was another woman entirely. Vivid. Intense. Aware. He stood, dumbfounded, wordless.

“Where the devil is it?” She headed for the chair by the fire.

She was halfway across the room before she became aware of his presence. Her eyes widened, and a woman he did not know looked straight into his soul, took his measure, and found him lacking.

After this moment of discovery, the barriers between Lucy and Thrale begin to come down little by little. As it turns out, Lucy knows something about boxing and she advises Thrale on the subject, revealing herself in the process.

The more of Lucy Thrale sees, the more he realizes she is a woman of substance, a woman he finds all too alluring, and not just for her looks. But Lucy is so very vulnerable to gossip, and to the predations of men who call her a slut. Can Thrale approach her without making her circumstances even worse?

I loved the characters in this book. Once he got over his initial misconceptions about Lucy, Thrale was wonderful. I loved the way he respected her for her mind and her will as much as anything and the way he defended her even from one of his friends. I loved that he regarded her so highly and that although he found her physically beautiful, her appeal to him was separate from her stunning beauty.

I loved the way that Lucy used her gorgeous looks as a kind of armor, a shield against society, against a woman who said she was “no better than she should be” and against the men who saw her past as an excuse to trespass, to violate her boundaries. I loved her past and her determination to earn and save the money for her independence and her refusal to fall in with her father’s schemes to marry her to one of his houseguests.

I also love the way you write moments of recognition, of emotional connection. But that was also one reason why I wished there wasn’t quite so much focus on the sexual attraction between Lucy and Thrale.

The sex was steamy and very sexy, and I loved that I felt the characters made love as only they two would and could. It felt personal, not merely tab A in slot B. But outside the bedroom, there was still quite a bit of focus on lust, and I felt that at times this took something away from the sense of emotional connection between Thrale and Lucy. That emotional, romantic tension was present in some scenes, I just wanted more of it.

At times I was also so conscious of Lucy’s vulnerable position as a “ruined woman” whose father was horrible at protecting her that I wished I could just skip ahead to the marriage proposal at the end, when Lucy’s position would be more secure. I was actually a little annoyed at Thrale for risking her reputation, even though he was such a sweet and thoughtful guy.

It also bothered me at the end of the  book  that Lucy’s father was still in the Sinclair sisters’ lives. I would have rather seen him cut loose because I felt he was toxic to all of them. At the same time, I’m not sure whether such a solution would be historically accurate.

My biggest issue with A Notorious Ruin, however, is its pacing. Most of the book is a little slow but not too much so. But there were two chapters that stood out as being downright sluggish.

One was a chapter in which several characters converse about fashion plates. There was an interesting unspoken conflict under the surface in that scene, but the actual conversation was circuitous, dull, and repetitive. Another was a chapter in which Lucy and her sister Emily talk about who, if anyone, Emily loves. The dialogue here was also repetitive and it took the conversation forever to get anywhere. Rather than being held in suspense, I felt impatient when I read these scenes.

The rest of the book had a lot of appeal to me. Even the boxing scenes and the discussions of boxing, a sport I can’t bear to watch, held my interest here without repelling me because boxing was the common ground between Thrale and Lucy, and their conversations about the sport were a kind of foreplay.

In sum, this was an enjoyable book with two strong main characters and beautiful writing. Although I would have liked A Notorious Ruin to move a little faster and focus a bit more on the emotional connection, I thought it worth reading and I do recommend it. B.