I haven’t read many Regency era books lately. Whenever I’ve looked at new releases, I’ve almost immediately been put off of them for some reason, often before I’ve even finished the blurb. Usually it’s some bizarre plot set up or mistorical aspect which promises to make me cringe if I should ignore my initial instincts and wade into it anyway. “A Little Folly,” though, has restored my faith. Not only did it seem almost entirely rational and period in feel, but I finished it so happy with the subgenre that it makes me want to rush right out and read another historical romance rather than cleansing my palate with another subgenre as I usually do. 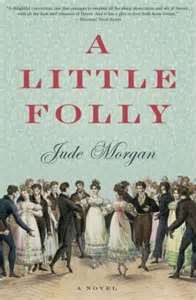 The plot is simple on first glance but reveals its layers as the book progresses. There is no secret-decoder-ring-wearing club of noblemen with silly names who have sworn off marriage. The story hasn’t any noblemen spies working for the government against Napoleon. Valentine’s and Louisa’s father might make Joan Crawford look like a shoo-in for parent of the year but that’s all. Instead of the usual dreck which sends me screaming there is the story of a brother and sister, brought up by a (recently deceased) overbearing father who now find themselves free to live. They aren’t just free to do what they want but are free to think as they wish without the need to conceal their thoughts and feelings from their father and to finally take part in society – both locally and in London.

Louisa can reject the cold, controlled neighbor whom her father wished her to marry and Valentine can take his place as the master of the snug estate left to him. They can also renew ties with the cousins on their deceased mother’s side whom their father forbade them to know. Soon, the two are headed to London to stay with their cousins and drink deeply from the cup of ton life. But will they discover too late where their love and happiness truly lie?

The arc that I got from Jane has a quote on the front cover that likens the story to Austen and Heyer. “Really,” I thought. “What modern Regency era books don’t try and associate themselves with either or both of those authors down to stealing characters and plots wholesale?” Still, there seemed to be good reviews of your books out there and I’m willing to try a book for a few chapters. After I’d finished said few chapters I thought, “Say, I don’t think those comparisons are too far off. And I’m not cringing yet!” Though I hesitate to tell readers that “If you love Austen/Heyer you’ll love this” I don’t mind saying “give it a shot.” The language doesn’t scream 21st century, the characters don’t fall into bed with anyone at the drop of a hat and the plot twists involved situations that just might have actually have been of concern to Regency people. I could catch little glimpses of things from the aforementioned authors but shifted slightly and given a new (but still period) spin. The nod to ‘The Greats’ exist but it’s not slavish, derivative fawning but rather taking them as inspiration.

The pace of the story is slower which is in tune with a world centered on the social niceties of calling cards, note writing and the attention to manners which marked a well bred person of the day. These people are rarely in a hurry and I felt myself settle down to enjoy the leisurely pace of their lives and interactions. I’ve read countless Regency books and have heard and noted all the facts about Almacks, period dress, slang, the Peninsular Wars and Wellington. A few are scattered around in the book but they feel germane rather than laid on with a trowel. I enjoyed the sly dig at too much slang in the silly character “The Top” whom Louisa and a friend from home secretly find ridiculous. There’s also no mention of watered down lemonade though some of the festivities which celebrated the defeat of Napoleon and those demmed Frenchies are attended by our characters.

There is an elopement in the book but unlike “Pride and Prejudice” it’s actually another period route to social ruin which threatens here and calls for timely intervention on behalf of one who loves from afar. Just as in an Austen novel, there are romantic feints and false starts among the cast and Louisa must wait until nearly the end of the story to get her romance but when it finally arrives and declares itself, I sighed with happiness and chuckled at her hero’s sense of humor and sense of the absurd. The two of them, and indeed all the couples, are well matched though some are perhaps not looking for nor will they probably be rewarded with wedded bliss.

I finished the book with nary an eye roll or groan of disbelief. Valentine and Louisa became real people to me with faults and follies to go with their ultimate growth in character and understanding. I didn’t feel that you were trying to cram modern characters with modern sensibilities into a past era. Readers looking for a lot of action and running around might not care for the story but those seeking a more character driven book which focuses a lot on the manners and observational habits of the day should check it out. B