REVIEW: A Kiss at Midnight by Eloisa James

When Jane sent me a batch of books for review, I was particularly excited to find A Kiss at Midnight in the pile. Over the years, I have come to expect interesting and realistically rendered characters from you; characters who often defy the clichés their roles in the plot force them into (you know-‘evil mother, beautiful yet callus other woman, etc.). More, you are one of the authors who consistently portrays women in positive relationships with other women, something that is sometimes lacking in other romances. So I was really pumped-‘if one can forgive the use of that particular verb when discussing a romance-‘to read your upcoming book. 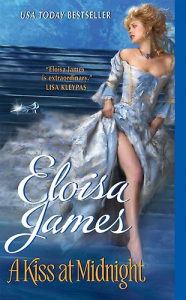 A Kiss at Midnight is a Cinderella story.   I don't mean that it is like Cinderella in the way, say, Pretty Woman is a Cinderella story. No, no. I mean it actually is a Cinderella story. It has a wicked stepmother and a beautiful, spoiled stepsister. The prince is actually a prince and not just a prince-like person, say a CEO or a lawyer (though why anyone would think that an acquisitions and mergers attorney is a prince is beyond me. I've seen the State Bar Association assembled. It was not a pretty sight.). There's also a fairy godmother who, while not technically a fairy, does dress like one and a pack of bite-sized dogs in lieu of rats. There are even glass slippers. So yes, all the elements of the classic Perrault story are there.

Kate Daltry is the Cinderella of this story, having lived under her stepmother, Marianna's, cruel and selfish thumb since the death of her father over a decade before. Her father-‘for reasons that later become clear-‘left her stepmother everything. The house, the land, the money are all hers to do with as she wishes and what she wishes chiefly, aside from her own comfort, is to have her daughter Victoria marry well. This goal is about to be achieved, for Victoria has gotten herself engaged to Lord Dimsdale. Lord Dimsdale is a bit dim, but a nice young man, which is a good thing because Victoria is also a bit dim and rather nice, despite her mother's attempts to spoil her rotten.

Kate, in the meantime, keeps swearing she's going to leave, get herself a governessing job or some such thing. Of course, she never does. She can't just abandon everyone-‘the tenants, the servants, etc.-‘they rely on her. They need her to protect them from Marianna's whims and petty tyrannies. So Kate stays and works as the steward because Marianna fired the real one. She stays and she does what Marianna says because she doesn't want anyone else to get hurt. In short, she's a bit of a martyr.

The real story begins when Victoria cannot go to see Lord Dimsdale's uncle, Prince Gabriel Aschenberg of Warl-Marlburg-Baalsfeld (clearly, a made up kingdom, although one could argue that all German principalities are made up kingdoms). You see, her lip has been bitten by one of her three rowdy little lapdogs and has swollen to the point of disfigurement. She can't not go, so Kate must go in her place. Marriage to Lord Dimsdale depends upon the approval of his uncle; therefore, approval must be gotten come hell or high water. Kate, who like all martyrs is easily manipulated by guilt, agrees to this absurd plan.

So off she and the very nice but easily cowed young Lord Dimsdale go to enact this cork-brained scheme.

Meanwhile back at the castle, the uncle, Prince Gabriel, is having a bit of an existential crisis. He and half the Warl-Marlburg-Baalsfeld court have been exiled by his older brother, the Duke, on account of being a bunch of weirdoes, reprobates and irreligious courtiers. The Duke has had an unfortunate religious conversion. Thus, Gabriel and his motley crew of courtiers have taken up residence in an English castle he owns, a castle that is falling down around their ears. Money is needed. A lot of money. Not just for the courtiers or the castle but the menagerie as well. So Gabriel has to get married. And he will. There's this Russian princess on her way, bags of money in tow. Of course, Gabriel doesn't want to get married. He wants to be an archaeologist. He can only hope that his unknown Russian bride will not only bring money but will take over the care and handling of his relations and castle.

So Kate meets the Prince and she's not impressed. Not impressed at all. And the Prince meets Kate and he is impressed. It doesn't take long for the masquerade to be discovered. Or for Kate to discover a godmother she never knew she had. Wackiness ensues.

Like all of your books, the characters are well drawn and do not always conform to type. Gabriel is more than a prince. Kate is more than a martyr. Secondary characters, as always, loom large in this book. There's Wick the butler, who is really Gabriel's illegitimate half-brother; or Victoria, the wicked stepsister who turns out to be neither very wicked nor very step; Lady Henry, the godmother who was in love with Kate's dearly departed and not very faithful father. Not to mention a Lord Hathaway, rival for Kate's hand, and Effie, a rival for Lord Hathaway's hand.

What distinguishes this cast of characters from previous books is that they really are secondary characters. I kept thinking that Effie, surely, would get her own novel. And I also thought the same of the dandy, Mr. Toloose. But they did not get their own scenes-‘as your secondary characters are wont to get in books not their own-‘and I was disappointed by that. I suppose it is a case of expectations not being met. This is not an ensemble cast as much as other series you have written. It is very much a book about Kate and Gabriel.

I don't have anything bad to say about the book. The characters were vivid, the plot interesting, the dialogue witty. But ultimately, something was lacking. I don't know what it was. I liken it to cooking. You can make the same recipe over and over again, and for whatever reason it will come out tasting differently each time. I have this happen to me all the time when I make marinara sauce. Sometimes it tastes exactly like my Sicilian grandmother's sauce. Sometimes it's no good. The variation is inexplicable.

The book didn't work for me even though it should have because all the ingredients were there. And there is no good reason for it not working other than the taste I've come to expect wasn't present.

Overall, this book was delightful, but the magic was missing. I'm glad I read it and maybe I'll even re-read it, hoping that whatever magic was meant to be there will suddenly burst into my brain. B.

This is a mass market from Avon, a division of HarperCollins.