REVIEW: A Game of Lies by Rebecca Cantrell

Fair Warning!: Spoilers for the first two books will probably appear in this review.

I look forward to the annual summer release of the latest book in your historical mystery series about Hannah Vogel in pre-WWII Germany. This one doesn’t disappoint. Like the two before it, this one is taut and fraught with danger. I am, however, wondering if Hannah can go for a full book without a slew of injuries but then when you put your heroine into the situations that you do, I guess she’s going to get banged up a bit. 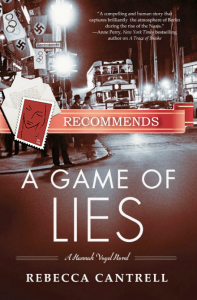 Once again Hannah goes toe to toe with the Nazis in order to right a wrong and try to get the truth of what they’re doing into the hands of people she hopes will be able to do something about it. She’s snuck back into Berlin, Germany during the 1936 Summer Olympic Games which the Nazis are carefully orchestrating to show what they want and hide the actual truth. Peter Weill, Hannah’s former journalistic mentor who gave her her start as a crime reporter, has asked her to meet him at the opening ceremonies. Along with Lars, Hannah’s information source in the SS, and a scientist friend of his, they watch the initial hoopla until Hannah slips away.

But Peter only has a chance to tell her that he’s on to something big and that he wants her to smuggle a package out of the country before he suddenly convulses and drops dead at her feet. Just as Hannah is about to betray herself with the shock of her friend’s death, Lars intervenes and drags her away from the prying eyes of the police. Trying to discover what else Peter meant to tell her, the next day Hannah visits his elderly sister. But when Theresa also dies under mysterious circumstances later that day, Hannah realizes that whatever Peter knew is bad enough that the killers will stop at nothing to contain it.

This isn’t the only issue she has to face. Lars’s drinking has markedly increased to the point that Hannah is afraid for her safety around him. Then an old friend she meets warns her that Lars is under suspicion and in danger of arrest due to his comments about what are becoming common practices in the SS interrogations
he has to take part in for his job. Will Hannah be able to find out what Peter died trying to tell her? Is Lars all she thought he was? As usual, the stakes are high, the danger is everywhere and if Hannah can’t keep ahead of the SS, she and others might pay with their lives.

Even though you had to tweak your story timelines a little to get everything to work for the plot, using this historical event as the backdrop is the perfect progression for the series. The Olympic Games setting is another attempt by Nazis to dazzle the world while – with the SS & SA not in uniform – trying to hide their strength and numbers. I can see the mandated Nazi flags waving, the lock step orderliness, the stark division between Aryan and Jewish areas. Hannah immediately notices the Nazis orchestration of the press to continue to put on a good show. Later in the book, Hannah makes an interesting comparison of people fervently cheering on their nation’s athletes first and humanity as a whole second with the fervent adulation the German people were then heaping on Hitler.

Like other books this one starts with a bang. The pageantry of the opening ceremonies going straight to the death of Peter and Hannah’s near miss with officials who find the body. Instantly she’s scurrying behind the scenes and dodging Nazis as she tries to solve latest crimes. Hannah never seems to have down moments during books, only downtime scenes she talks about in retrospect. Lars pegs it with comment, “Have you ever wondered why you are always at the center of a deadly storm? You’re drawn to it.”

Unlike first two books, in this one Hannah’s motivation to continue her investigations isn’t based on personal danger to her son Anton or to other family member but to salve her conscience over not discrediting Rohm before – though she’s realistic that this might not have made any difference. She knows from the Night of Long Knives and through Lars of the human cost already exacted and wants to prevent more deaths and keep Germany from sinking into further Nazi horrors. She also wants to avenge death of Peter Weill and his sister but unlike previous books, it’s the truth she wants to see revealed and she’s not attempting to keep someone alive now. Hannah’s insistence on continuing with the investigation maddens Lars due to the growing danger it involves just as her spying makes Boris issue an ultimatum. But it’s her nature. She loved being a crime journalist before for a reason. She’s the type to keep asking questions and keep unearthing secrets until she’s followed the trail to the end. I can’t see her ever changing fundamentally from that but she has the common sense to still be afraid – deadly afraid though this gives her enough anger to keep going, to see justice done in spite of all attempts to crush it.

Lars plays a deadly game which fools those around him as well as Hannah who has to reevaluate how much she can trust him despite his previous actions which saved her life. He’s cracking under the strain of being forced to be the good cop as someone has to show these poor women in the interrogation cells some small degree of kindness. The whole thing is killing him inside – that what he does from compassion is working for the Nazis. That he’s praised for it. It’s a frightening moment in casino when Lars goes into shell shock and slips into his interrogator role.

Hannah and Lars continue their espionage efforts to save Germany from the Nazis. They love their country and hate to see what is happening to it and the people who are taking power. They separate Germans from Nazis and Germany from National Socialism. Those trying to leak information to the British about the newest development are also trying to avert the remembered horrors of WWI but they’re not perfect people either as seen in some anti-Semitic statements. Seemingly everyone in Berlin is slipping into a gray mode making it even more difficult to know whom to trust.

The denouement is terrifying. I had felt the coils tightening all through book as Hannah repeatedly escapes in nick of time but her luck had to end. Good thing for Lars’s reputation which could be put to good use. Plus Hannah has a trick up her own sleeve. It’s not quite a deus ex machina but Hannah was pulling out all the stops by then. Wow, Lars can still function even after a pistol whipping and beating, cracked ribs, and broken nose. He’s the man! The standard romance hero who can perform after gross bodily injuries would admire this guy.

I said it about the second book but I think it bears repeating that I love how the characters have evolved over 4 years. Some relationships have changed dramatically. Paul and Hannah were once close but anti-Semitism has taken its toll, Boris and Hannah changed from suspicion to love to frustration and anger, Lars and Hannah have gone from fear to a working relationship to something else. I’m never sure what’s going to happen next as there’s no safe, calm place or relationship in the storm. I miss Anton. He is blooming away from Germany but still sees things as a young boy would in terms of his favorite Winnetou books and gets petulant and withdrawn when he senses trouble from the adults of his world. Yes, he’s better but the scars of his childhood are still there.

You do a great job in keeping the book in the “here and now” and don’t have hindsight comments. The reader experiences events as Hannah does which allows for surprise at how things have changed in the 4 years since beginning of series. The foreshadowing of future events – such as when Hannah sees some Japanese diplomats at the Nazi party – only means something to the reader. Hannah is restricted to what she can logically deduce from what she knows and sees. Through Hannah’s shocked eyes we see how Germany is changing radically especially how Jews now view all “Aryans” and that they see Hannah this way. Paul was once her close friend but no longer. Only Frau Doktor Spiegel is willing to risk helping her. Hannah is also dismayed at how Bettina and her husband Fritz have altered their point of view and become inured to what’s going on.

It’s nice seeing Bella Fromm again as she walks a tightrope with enough clout to make the Nazis treat her with care but still seeing what’s happening to the average Jew in Germany. Agnes! what a character. I hadn’t thought about how the Law for the Prevention of Hereditarily Diseased Offspring would affect her. Will she still figure in things for future books? With Rohm eliminated it seems that tolerance of homosexuality is over forcing Wilhelm to finagle a respectable heterosexual front. Also the details of what goes into the new forged passports from Herr Silbert are fascinating.

The book concludes with Hannah escaping back to the safety of Switzerland but I know that won’t last. You’ve dropped tantalizing clues about the next book. Will it be about more Luftwaffe training and remilitarization? Will Boris’s daughter and son in law figure in it? Will Lars survive his trip to Russia? And what will be the next thing to draw Hannah back into danger? I’ll look forward to finding out. B