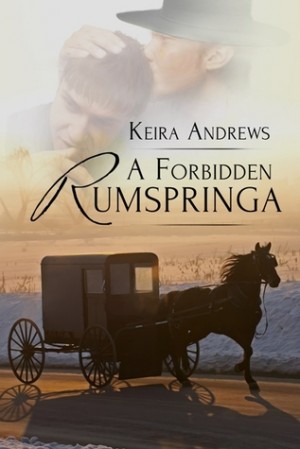 Ah, star-crossed love. I adore romances in which “forbidden” isn’t just a buzzword in the title.

After rumspringa rebelliousness left three teenagers dead, Issac’s family left their Amish community in Ohio to begin a new one with a much stricter Ordnung. (Regulations about every aspect of life, down to the exact size of bands on hats.) In his previous life Isaac could use a mirror, take a shower, and occasionally get to eat at MacDonalds. (There was even buggy parking.) But in the new Minnesota community, anything with the slightest tinge of “worldliness” is frowned upon. The atmosphere reminded me of the movie “Office Space,” in which a restaurant employee was chided for wearing no more than the required amount of decoration — even just abiding by the actual rules isn’t enough, you have to go above and beyond.

For most youngies — young adults who have yet to officially join the church — having a chance to enjoy some free time with the opposite sex is a bright spot in their hard-working lives. But at 18, even with pressure from his family to settle down, Isaac can’t seem to get interested in courting.

Isaac glanced at Mary Lantz again. She was pretty enough–more than enough, with her kind smile and her big blue eyes that were darker than her brother’s. There was nothing wrong with Mary. But Isaac was beginning to think there was something very wrong with him.

The problem is, Isaac is far, far more interested in Mary’s brother David, who’s teaching him woodworking. The growth of this unspeakable attraction is shown deliciously in many small touches and glances. At one point, David sneaks Isaac into the “English” world to watch a movie, and gives him jeans to wear, with an unfamiliar and forbidden zipper.

‘Do you want me to do it for you?’ David asked.
Isaac could only jerk his head in a nod. He held his breath as David reached down and ever so gently zipped the fly of Isaac’s English jeans. He did up the button at the top, his knuckles brushing against Isaac’s trembling belly. They were standing so close that Isaac could see the flecks of grey in Davids eyes…

But once the first move is made, they quickly move past kisses into an explicit sexual relationship. I found this a little unconvincing; David seems awfully sophisticated and commanding for a virgin, even one four years older than his lover, and with some experience in the outside world. (And he better not be lying, since they know nothing about safe sex!) The emotionalism of the sex scenes sometimes felt overdone, but the tenderness is palpable, focusing on their blissful freedom to be themselves and to adore each other’s bodies. The worry about discovery and hellfire taints everything, of course, as does the increasing yearning for the ability to share their lives completely. Suspense mounts as David insists that once he joins the church, he’ll be able to put these feelings aside and be at peace.

The story is rich with descriptive details that immerse the reader in the unfamiliar environment, and also with moments that highlight the emotional realities of this kind of life — for example, when Isaac inadvertently mentions his excommunicated older brother’s name at the dinner table, and his youngest brother asks, “Who’s Aaron?”

It was like a physical blow to to Isaac’s gut, the realization that of course Joseph didn’t even know of Aaron’s existence. Katie watched them all with big eyes brimming with tears. She’d only been a baby. Had Isaac and Ephraim really never talked about Aaron with them? He wasn’t even sure if Nathan knew his name, but judging by the tension in his frame, Isaac thought he did.

‘No one,’ Father answered.

And that was that.

I’ve never read an Amish romance before, unless you count Sunshine and Shadow, but I have the impression they tend to be idealized portraits. This is very much the opposite, which made me slightly uncomfortable; I felt there should be a little more balance when describing a religious community. The acknowledgments thank “the ex-Amish who so generously shared their stories” but it would have seemed respectful to have a little insight into why some people would want to stay, other than fear of the modern world and the pain of losing their families.

There were parts of the narrative that feel a little too pat, particularly towards the end, but they’re always well set-up. For example, a early scene in which Isaac describes Amish life to a conveniently curious quilt-buyer is interspersed with his uncomfortable realizations about how attractive the man is. Overall this is a very well-realized, touching story, with plenty of heat. (It is also well produced, with nothing that screams “self-published.”) As with many New Adult books, the end leaves plenty of unanswered questions and there will be a sequel, but there’s no relationship cliffhanger, thank goodness. B