REVIEW: A Fireproof Home for the Bride by Amy Scheibe 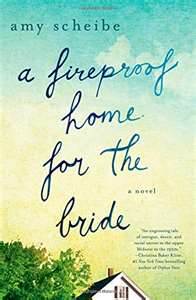 Emmaline Nelson and her sister Birdie grow up in the hard, cold rural Lutheran world of strict parents, strict milking times, and strict morals. Marriage is preordained, the groom practically predestined. Though it’s 1958, southern Minnesota did not see changing roles for women on the horizon. Caught in a time bubble between a world war and the ferment of the 1960’s, Emmy doesn’t see that she has any say in her life, any choices at all. Only when Emmy’s fiancé shows his true colors and forces himself on her does she find the courage to act—falling instead for a forbidden Catholic boy, a boy whose family seems warm and encouraging after the sere Nelson farm life. Not only moving to town and breaking free from her engagement but getting a job on the local newspaper begins to open Emmy’s eyes. She discovers that the KKK is not only active in the Midwest but that her family is involved, and her sense of the firm rules she grew up under—and their effect—changes completely.

Seriously, how could I resist this title? I had to read the book if only to find out what it means. The book starts as a YA in that Emmy and several other secondary characters are still in high school but then morphs into a NA as Emmy heads out into the world, gets her first jobs one of which then leads her into what is basically her adult career. This is still an era of early age marriage which followed even earlier age marriages but seeing and hearing about 15 year olds getting hitched for life still gives me the squicks.

Emmy has been groomed – somewhat harshly – by her mother to become the perfect 1950s epitome of womanhood – a girl straight out of high school to get married, keep a spotless house and start popping out babies. As Emmy thinks during her last semester before graduation, learning how to budget meals and sew are of more use to her than any of her other classes. Her Home Economics class is straight out of 1950s education films mocked by MST3K complete with nauseating jello and aspic molds plus lessons in inexpensive cuts of meat.

Emmy truly is hemmed in by the way she was raised – to not know anything except what her mother thought she should know – and the mores of the times – a woman’s place was in the kitchen and not to question her menfolk. Watching Emmy’s eyes being opened by merely one night out with other teenagers was almost heartbreaking. Reading it, I felt as stifled as Emmy did as she was being firmly, and without a thought for her wishes, railroaded towards her future of being a farm wife and planning economical meals while always making sure there’s coffee percolating in a time of crisis.

The attention to detail is meticulous but never feels smothering or merely thrown in because the information is too neat not to use. Instead it reads like a modern contemporary would – only it’s contemporary to the 1950s if that makes sense. Squeamish readers should be aware of the deer that gets field dressed in the prologue. There’s also a lot of attention paid to the details of what everyone is wearing which sometimes verges into excess.

The sudden intrusion of violence into Emmy’s life is as horrible as her mother’s response to it – “what did she do to provoke him? Hopefully he’ll forgive her and that’s the way things are.” Sheesh, who can blame Emmy for bolting from this? The next section of the story is like watching Eve after she’s eaten the apple. Life isn’t the drab gray she’s lived with before. Yes, things can be bad, there’s evil in the world but there’s color and choices as well.

The major choice for Emmy is will she settle into another relationship or keep exploring her new possibilities. She can select a fireproof home for the bride which is advertised as a home that nothing can damage or she can take a gamble and venture more into the world. Does she want a life where nothing is risked but nothing is gained or a world with danger but also independence.

With her expanded view of the world, her increasing knowledge of her own family’s past and her opened eyes, Emmy begins to catch hints that not everyone is as she’s always thought they were. There are disturbing aspects she’s catching glimpses of. As she begins to venture into journalism, looking closely and questioning, undercurrents begin to tug at her. When she finally knows the dirty family secrets, Emmy feels as if a rug has just been yanked from under her feet. She also can’t stop her budding reporter’s instincts to keep digging for the story in it all. Things go a little wild here with villains showing all their despicable plans both past and future. One nice note is a relationship which is hinted at but never denigrated.

The story ends on a note of possibilities. Emmy has made a firm decision about where she wants to go and there might be someone to share the journey with her. Her story is definitely more one of a woman of this time coming of age rather than a romance but as a time capsule of 55 years ago, it’s fantastic. B