I wish I had read this on the Nook instead of the Kindle, because then I would have realized going in that it was less than 90 pages long, and been able to adjust my expectations accordingly. On the other hand, considering that when I looked down and realized I was almost halfway through, I actually worried that I’d somehow only gotten part of the file, perhaps the book would have felt unbalanced or incomplete to me anyway. I certainly thought there would/should be far more story coming. 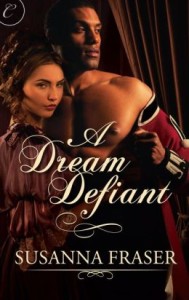 Like previous Fraser books, this is set during the Napoleonic Wars — specifically, Spain in 1813. And also like previous Fraser books, it really is set there; you could not just pick this story up and plant it anywhere. To make it stand out even more in a genre increasingly filled with wallpaper historicals, the main characters are working class, and the hero is black.

When one of his men is fatally wounded while scavenging a ruby necklace after a battle, Corporal Elijah Cameron promises to deliver the necklace to Sam Merrifield’s widow. But he’s aware that such a valuable item could be as much of a threat as a windfall to Rose Merrifield, who will already be very vulnerable as a now unprotected woman in an army camp. Sam’s last wish was for Rose to use the necklace to fulfill her dream of buying an inn and becoming a cook, but if Rose remarries immediately — the safest choice for a war widow with a child — the necklace will legally belong to her husband. Elijah’s has long admired Rose’s beauty and character, as well as her cooking, and he takes on the role of her protector, hoping to help her dream come true.

Despite the title, this is more a story about practicalities than dreams; both Elijah and Rose have had to live their lives on a very practical basis. Elijah, who is not only black but very large, has learned to carefully control the image he presents at all time, playing “Gentle Giant” or “Terrifying Negro” as needed. He’s had to face that he will never be allowed to rise to a higher rank in his chosen career, and to cope with numerous small stings in daily life:

Elijah had been called into that same meal to settle a bet with an officer from another regiment about the mental capacities of the Negro. He hated such performances. It had been one thing when he was a boy, but as a grown man and an NCO, to be called into the colonel’s tent to recite poetry and demonstrate mental arithmetic was humiliating. Yet it would be churlish to refuse…

Rose, too, is used to making the practical choice. Marriage to the good-natured if somewhat ineffectual Sam had been a blessing for her. Remarriage before she’s barely had time to grieve is just one more survival mechanism.

I was conflicted about this aspect of the story. On the one hand, I appreciated the realism. Poverty, sexism, and racism are game changers, no question, and we don’t often see that reflected in romance. On the other hand, I almost got the sense that because of their roles in life, Rose and Elijah weren’t really allowed to have feelings here. Despite several ugly plot points, the book overall is very low on conflict or angst; they’re both just so good at shrugging things off and accepting their fates. Elijah in particular is just a little too perfect. This make sense in context, to a certain extent, because he would never have risen as far as he has if he wasn’t exceptionally intelligent and capable. But he has so few resentments, or desires for himself, and always, always does the right thing.

There is set up for genuine romance between the two. Rose has always admired Elijah’s smile, and thought, “unlike many tall, long-limbed men she’d known, he was all grace and no awkwardness. It was a pleasure to watch him walk across the camp, or to toss little Jake and Fernando high in the air and then catch them in his big, sure hands.” Elijah’s unacknowledged feelings for Rose are even stronger:

“Have you any thoughts of courting the fair Rose yourself, or would you prefer a bride of a tawnier hue?”

Rose Merrifield, his wife? At the mere suggestion of it, all the longing he’d ever felt for her but carefully tamped down because she was already married flared to life. He could run his hands through her tumbling chestnut curls and all down the lush, strong curves of her body. He’d have her to talk to every night, all that clever, practical good sense with the hidden passion and poetry that came out when she talked of food.

Even with this background, an accidental but passionate kiss between them on the very night Rose’s husband died is uncomfortable to read, and their eventual relationship feels rushed and shortchanged, despite little time spent on sex scenes. (Or perhaps that’s because?  I’m not a reader who finds sex scenes necessary in romance, but their abbreviated scene was lacking something.) There’s so much that feels like it needs to happen in this story, both in the characters’ minds and in the plot — it’s not a simple decision they’re making — but there isn’t enough space left for the follow through and so the book never reaches it full potential. I’m happy to see these less typical characters appear in historical romance, and just wish they’d gotten the intense, meaningful novel they deserve. C+

I agree with a lot of Willaful’s points, including many of her criticisms, but I ended up liking this book a great deal. I did know that it was a novella when I began reading it, and I was curious whether the shorter format would be adequate to tell the story. I think it posed some problems, but more on that later. 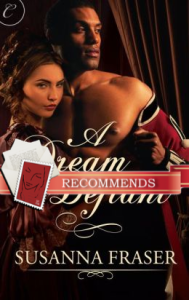 The setting is, as always, thoughtfully and carefully conceptualized. The minutiae of everyday life in the Peninsular War is integrated into the narrative, dialogue, and characterization. As someone who reads romance as much for the context as the relationships, it was a pleasure to sink into this world and lose myself for a while.

The story is a fairly simple one, made more unusual and complex by the fact that Elijah, the hero, is black. Elijah has risen to the rank of Corporal because of the patronage and support of influential men, but he knows he can go no further, and he has learned to manage the small and not-so-small slights that are aimed at him by his white subordinates. He did verge a little on the too-good-to-be-true side, but for me he was saved from that by other aspects of his characterization, in particular his self-restraint. I’ve known minority-group men with similar traits, who seem to make a deal with themselves very early in their lives that they will withstand whatever injustices they are dealt with fortitude and impassivity. It’s not that they don’t have feelings, but those feelings are so controlled and disciplined that others don’t see them, and sometimes the men themselves stop consciously thinking about them. For me Elijah was a refreshing contrast to the emotive heroes that currently populate romance novels, but some readers may find him too emotionally opaque.

Rose is the wife of one of Elijah’s men, Private Sam Merrifield. In the looting that follows the Battle of Vittoria, Merrifield is fatally stabbed by a French soldier, but before he dies he entrusts Elijah with a valuable ruby necklace to give to Rose. The sale of the jewels will enable Rose to fulfill their dream of running an inn in their home village. Rose initially intends to leave the army and travel to England with the necklace, but when word of her riches spreads through the camp, the best way to guarantee her safety is to marry quickly. She likes and trusts Elijah, and she consciously deliberates about whether the problems that she might face by marrying a black man are worth risking. For his part, Elijah has been attracted to Rose since he first met her, but he learned to control those feelings and he has trouble accepting not only that she might want to marry him, but that she might also expect a real, lasting marriage.

I found the scenes between Elijah and Rose genuine, affecting, and convincing. I could see why Elijah had fallen in love with her, and Rose’s shift from seeing Elijah as a trusted friend to a potential husband whom she could love was believable to me in the context of the story. She had made a good life with Sam and their son, but Sam didn’t strike me as her grand passion, and the sensible way she settled on Elijah seemed appropriate given her circumstances. I had a little more trouble with the relatively quick “I love you” moment, but their slow courtship was very nicely depicted.

In fact, the book was working really well for me through that period of decision and its aftermath, but then the story shifted into a different context and the pace sped up a lot, and I attribute the sharp turn to the novella format. This is one of many novellas and short novels I’ve read in the last year or two where I felt that if only the author had had a longer wordcount, the story would have been more complete and satisfying. I don’t know whether the length here is the author’s choice or the publisher’s, and for my purposes it doesn’t matter; I’m saying only that the story as presented felt truncated. Elijah and Rose’s life comes with some expected and not-so-expected ups and downs. These ups and downs are eventually resolved and their HEA looks promising at the end. But in contrast to the early scenes, which unfold at a relaxed pace, the later scenes feel rushed, and some key plot and character developments are handled too summarily. It wasn’t that I didn’t believe them, but more that I went from being immersed to feeling that I was being told the story, if that makes sense.

Despite these criticisms, I really enjoyed the book overall, and I thought the interracial romance aspect was well handled. My head says the flaws require me to take note in the overall grade, but my heart says this is a Recommended Read. Grade: B