REVIEW: A Bride for Jericho Bravo by Christine Rimmer 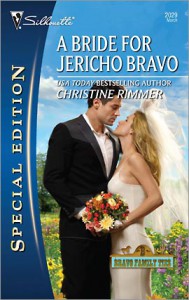 I am not sure why I am always surprised when I read a good series romance. After all, I’ve been a big proponent of series books for the last few years. I suppose it’s partly the titles and maybe it’s the brevity of the books that gives rise to a preconceived notion that these stories will be lightweight. The one big complaint I had about this book, though, was related to length. I’m not sure if it is length of book that was the issue. More on that later.

This is a very tender love story between two misfits. Marnie Jones’ longtime boyfriend, Mark, broke up with her, leaving her heartbroken and lost. She drives away from him and her hometown to seek refuge with her sister, Tess who married Ash Bravo. Marnie’s boyfriend told her that she had lost what it was that made her special. Upon reflection, Marnie realized that he was right. She had moved in with him and because he had a trust fund, she didn’t need to work. His friends became her friends; his interests her interests. Her whole world narrowed to focus solely on him and Marnie transgressed to become his shadow.

Marnie had actually been a wild child of the family engaging in everything from petty thievery to general outrageous behavior. She had grown up with Mark, fell in love with him, and thought that they would live happily ever after. It wasn’t that Mark asked her to pack away her identity. She just did.

Upon arriving at her sister’s house, Marnie runs into Jericho Bravo, a big, tattoed, and dangerous looking man. She thinks he might be an intruder. This does not go over well with Jericho who is really the black sheep of the Bravo billionaires. Jericho is not a billionaire but a former felon and current owner of a custom motorcycle business. He doesn’t want to be the black sheep but he doesn’t fit in with the rest of his overachieving family either despite loving them very much.

Jericho is a sweet man. He does not feel good enough for someone who looks like Marnie, full of spirit and freshness but Marnie convinces him that she’s only in town temporarily and a fling would be good for the both of them. Marnie goes so far as to sell Jericho on the idea of being the rebound man. She won’t fall in love with him because she’s still nursing her broken heart. At first, this appeals to Jericho. There is something about Marnie that trips his trigger. The more time that Jericho spends with Marnie, the more that he regrets the lack of permanence of Marnie in his life.

I also appreciated that Marnie and Jericho’s interaction with their siblings. There was a bit of sibling rivalry between both the sister and the brother and everyone didn’t always get along. These seemed to add a feeling of realism to the story.

While I totally believed that Jericho and Marnie were meant to be together, I felt that the time which passed between her break up with Mark and her falling for Jericho was too short, particularly given the strength of Marnie’s feelings for Mark at the beginning of the book.

I did enjoy seeing Marnie step out from the shadows and find balance between being the free spirit and the responsible adult. Jericho was a sweet, sweet hero who found himself in love with a woman who might still love her former fiance. B