REVIEW: A Brand New Me by Meg Benjamin

My blogging partner, Jayne, reviewed a few of your books and I always meant to see read them. When I was perusing the coming soon catalog I spotted the print release of Brand New Me and hopped right over to Amazon to order it. I spent the weekend reading the entire series. The reason why is because they are charming, sexy, and sweet. 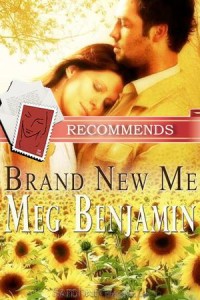 For long time followers of Benjamin, this is the first book that doesn’t feature a Toleffson male as the hero but they appear, in full. Having not read the entire series, I didn’t miss the Toleffsons but I was totally intrigued by the writing and their brief appearances to go back and buy all four previous books.

Before I get into the book, I have give some backstory.  When I first started reading romance regularly, many of the books that I read were category romances I found at the library.  I remember fondly the Candlelight Ecstasy romances, the Rapture romances (who can forget the distinctive maroon covers?), but some of my favorites were Silhouette Desires written by Lass Small and Anne McAllister (McAllister’s are part of the Harlequin Treasury books if readers are interested in checking them out although my favorite – The Eight Second Wedding – is not yet digitized).  There is a sweetness and solidarity to the communities that they wrote about in the late 80s, early 90s.  This entire series kind of swept me back to those books, but in a really good way.  The town of Konisburg, Texas, is a modern version of those communities.  It’s still fairly homogenous (lots of Norwegians down there in Texas) but not as innocent.  The books are all pretty sexy, living up to trademark tongue in cheek warnings provided by Samhain.

This one comes with the following warning:

The honky-tonk makeover could be applied to Tom Ames, the hero; Deirdre Brandenburg, the heroine; or even Tom’s bar, Faro. They all undergo a change, one wrought by their shared experiences, their exposure to each other, and ultimately, the feelings that they develop.

Tom Ames is a man with a troubled past.  (cue the spaghetti western music)  Are you back? Allow it to play in the background.  Tom came to Konisburg a few years ago and claimed ownership of Faro, a bar with a bad reputation.  No one in Konisburg knows much about him and he’s not been eager to change that.  He does want to succeed and he’s joined the Konisburg Merchant Association to ingratiate himself with the townies, but it isn’t enough.  The town wets its whistle at the Dew Drop, a place that Tom describes as dark and dirty with the tap beer as bland as dishwater.  Tom’s an outsider and thus his bar, while attractive to tourists, is not frequested by Konisburgers.  (turn the music off now)

Deirdre Brandenburg has a fancy MBA and good business ideas but her father is a raging mysogonist.  His not so secret plan is to get her to marry his newest acquisition, a former Dallas Cowboy football player turned employee for Big John Brandenburg.  Deirdre decides she’s had enough of Big John, enough of the shithead football player who steals all her ideas and passes them off as her own, and leaves Houston and the family empire to pursue her dreams of being a coffee roaster.  Big John is enraged and cuts her off from nearly every cent that Deirdre has access to because she foolishly never took her dad’s name off the accounts he started for her so many years ago.

Deirdre takes herself off to Konisburg where her cousin Docia lives. It’s the perfect place for Deirdre to start a coffee roasting business.  The next best place to get roasted coffee is too far from Konisburg, a town that does a bustling tourist trade.  Deirdre can start there and move outward but starting is a problem when she has nearly no funds.  She gets a job waiting tables at Tom’s bar and leases a tiny space from Tom next door to the bar.  In between waiting tables, Deirdre starts her coffee roasting empire by, glamorously, cleaning and painting the space.

Big John is furious with Deirdre and orders the designated future son in law to get Deirdre back into the family fold by any means possible.

Tom and Deirdre both need a makeover.  Tom needs to figure out that being a loner isn’t all that it’s cracked up to be and Deirdre needs to learn to stand on her feet.  She’s had too much help and he’s not had enough.  I love how their character conflicts mirror and intersect.  (The title is also brilliant because, as stated previously, Tom, Deirdre and the bar, find themselves reborn).  While the standard make over trope is included here (Deirdre unleashes her inner bombshell), it was nicely offset by Tom’s emotional makeover.  Further, this book avoids some obvious traps for misunderstandings. Instead of hiding information from each other to “protect them”, both actually talk about things that happen, allowing the other to make decisions about what is going on in their own lives.

The bar family is wonderfully done with small sketches from the bossy female chef and the deceptively sleepy looking mountain of a bouncer to the troublesome regulars who come to Tom’s aid when he least expects it.  While Tom and Deirdre both think that the other is attractive, they don’t immediately fall upon each other like wolves who haven’t eaten in a week.  So why the B grade for this book?  It’s because the suspense element was disappointing and over the top in the end.  I thought the trouble that was brought into Tom and Deirdre’s lives was believable as it seemed to take on unintended consequences but the ending to that plot element was a disappointment. I also felt that the story could have gone deeper into developing some of the inadequacies that Tom felt. Those were painted with a light hand. There are multiple points of view in the story including from the “villain” but that didn’t bother me. It might be an irritant to other readers.  Still, after reading this book, I went and purchased all four previous Konisburg books.  For the record, this one and the first one: Venus in Blue Jeans, are my favorite.  I felt my $20+ was well spent.  B

P.S. So the book is out in print now and it’s fairly pricey. I’m not sure what the word count is for this book but I am guessing it is over 80,000. My best advice is to go and read the sample at Amazon or Samhain. If you like the sample, I think you’ll like the book.

PPS.  A little excerpt. This is from the start of the book:

Tom Ames could never figure out the attraction of the Dew Drop Inn. It was dark. It was dirty. The beer on tap tasted like dishwater and the bottled stuff was overpriced. The barmaids looked like they ought to be performing community service, and they acted like they were.

Tom took a sip of his draft, holding back his grimace with an effort. Ingstrom, the owner, was watching him from the bar. No doubt he wondered why the owner of the Faro Tavern was in his place at five on a weekday. Maybe he thought Tom was trying to steal his trade secrets. Tom wondered briefly what trade secrets Ingstrom could lay claim to, besides the flattest beer he’d ever tasted.

The next booth held the Toleffsons, or two of them anyway. Tom squinted in the gloom, trying to identify which of the Toleffson brothers was sitting there tonight, given that they were all the same size—massive—and all had the same dark hair and eyes. He thought the one with his back to him was the County Attorney, Peter, and the other one was maybe the accountant, Lars. Lars Toleffson actually did Tom’s books, and he was damn good at it. But in the darkness of the Dew Drop, it was hard to tell who was who.