REVIEW: A Promise of Fire by Amanda Bouchet 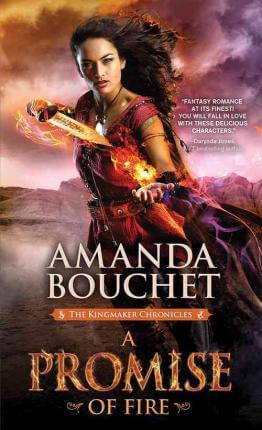 I’d heard good things about this, your debut book. Having seen it was the first in a series, I tweeted you and you kindly responded to let me know that while there are no cliffhangers, the romantic and fantasy story arcs are incomplete in A Promise of Fire. You also told me that the romance ending is fairly optimistic. So, armed with that knowledge, I requested the book for review.  You were very accurate. There are no cliffhangers and our heroine and hero are left at a relatively happy place in their journey. They face many challenges yet of course, but the ending of this book wasn’t one that made me gnash my teeth with impatience or frustration.

Cat is a native of Fisa, a northern kingdom close to the magic of the world. She has been on the run from someone or something for eight years and is hiding out as a “soothsayer” at a circus. Her magic is very powerful and very unique. She can tell when someone is lying – this makes her a “Kingmaker”: those who know what is true and what is not have a powerful advantage over other would-be rulers.  Beyond that ability, she also can absorb magic from others. So, for example, if someone uses a magical fire whip, she can harness that magic and use it as a fire whip herself until the magic she siphoned off is expended.  From magical weapons she is also fast-healing – while she still feels pain, it is short-lived because her healing commences almost instantaneously. She has one or two other tricks up her sleeve but I’ll let readers find out what they are on their own.

Griffin, the hero, is “Beta Sinta” (and for much of the book Cat addresses him by his title and not his name). Sinta is another of the three kingdoms in The Kingmaker Chronicles (the other being Thalyria).  Why is not entirely clear to me, but after he won the kingdom of Sinta from despotic magic-wielding rulers, his older sister, Egeria, was given the crown. She is “Alpha Sinta”.  Griffin is searching for a Kingmaker so that his sister may have the political advantage and, when he spies Cat, he knows she is who he sought. He is also fairly instantly smitten. However, when Cat refuses to come with him willingly, Griffin coerces her with threats to her friends in the circus and binds her to him with a magical rope which cannot be cut or untied by anyone other than he.  Much to Cat’s dismay, it appears Griffin is also immune to magic so she is unable to do anything to escape while bound with the rope. (Exactly why/how Griffin is immune to magic is something I hope will be explored later in the series.) Another relevant thing about Cat’s magic: when she makes a promise, her magic locks her into it. If she breaks a promise, she suffers excruciating pain. It is, obviously, not a thing she is keen on experiencing.

The worldbuilding in A Promise of Fire is based on Greek mythology and the Greek pantheon. I admit I know little about these things (does the animated movie Hercules count?) so I cannot say how closely it hews to the legends and stories already in existence. However, it seems to me that the novel borrows from Greek mythology to tell a new story rather than expanding on an existing legend. I don’t think it is necessary to know much about Greek mythology to enjoy the book (though it may well help).

Cat certainly has a close relationship with some of the gods – Hades and Poseidon and possibly also Zeus. Exactly why this is the case is still a mystery but I’m sure it will become clear as the series progresses.

Up until Griffin and his family turned Sinta on its head, the ruling nobles in the three kingdoms were all magic users who had little use for the Hoi Polloi. Griffin is neither a noble nor a magic user (notwithstanding his magic immunity which, it seems to me, must be somehow magical in origin). He is a warlord from a tribe somewhat removed from the nobles but definitely still adversely affected by their excesses.  That power is now held in Sinta by a member of the Hoi Polloi is a cause for much speculation and, from the nobles in Fisa and Thalyria, potentially a cause for concern. What would happen is someone in their realm got the same idea?  The Hoi Polloi of Sinta themselves are still feeling their way about Griffin and Egeria but are cautiously optimistic – and some sections of the community are completely adoring.

While A Promise of Fire has a female/male romantic pairing, in some ways, the story reminded me a little of Captive Prince. For instance, like Damen, Cat  is captured and kept against her will – she even uses the term slave. Like Damen, Cat is keeping a secret about her identity (although the nature of that identity is very different) and like in the Captive Prince series, the romance doesn’t really start heating up until Cat’s status becomes more equal so that consent issues are less of a concern than they might be. Politics is also a significant player and the evil villain had some things in common with the Regent from the Pacat series – they are both ruthless and clever – although their end goals are disparate.

Perhaps reading the Captive Prince series made me more sensitive to power differentials in a captive/capturer narrative because I admit I felt some discomfort at times in Cat’s relationship with Griffin. Even when she is no longer bound with a rope, she is still bound to Griffin. It is quite a long time before she stays with him of her own free will. And, even then, because of the machinations of others, I did wonder how much free will she actually had. (And it was not only hers I wondered about.) In the end, I’m not entirely sure I was completely reconciled to the way their relationship began, even as I saw the developing affection and respect build between them. In part, I think this may be relieved by future installments of the series and spending more time with them on a more equal footing – here, Cat is a captive, one way or another, for most of the book.

“Help me, Cat. Or at least tell me the truth. I know when you’re lying.”

“Oh?” My heart trips over its next beat.

“Your eyes get twitchy.”

“My eyes do not get twitchy!”

“This one gets narrower.” He touches the tip of his finger to the corner of my right eye, and a little jolt zips through me. “It’s as if you’re expecting the lie to hurt, but it doesn’t because it’s your own.”

I jerk my head away and start walking again. “Thank you for telling me. I’ll have to work on that.”

“Cat…” he growls, stalking after me. “Everything would be so much easier if— ”

Beta Sinta shakes his head. “I can’t. You’re too valuable.”

“Aren’t you the lucky despot? The one who caught the Kingmaker. Forgive me for not being overjoyed about becoming your slave.”

Incredibly, he believes what he’s saying, even if I don’t.

The romance develops slowly – Cat is feisty, prickly and resistant to getting close to people and she very much resents her captive status (of course). She has no hesitation in making Griffin pay for it whenever she can.  Their interactions have a whiff of early Kate Daniels and Curran. Griffin holds most of the power in their relationship most of the time and he is essentially only curtailed by his feelings for Cat. He is however very open about them and there was something refreshing in that.  I was happy enough that the romance didn’t move more quickly. As I said earlier, Cat’s status gave me some misgivings and I thought it was important that their relationship wasn’t consummated until after that had been resolved. (And speaking of consummation, there was unfortunate Hymen Misplacement Syndrome evident. The hymen is not way up inside. Really.)

The first book in a fantasy series has a lot of work to do. It has to set up the world and the mythology and set the scene for the overall arc. My expectations of a first book (not a debut, a first in a series SF book) are calibrated to that. I enjoyed the story but I did find that it took me a while to read. While I was actually reading I liked it but I also found it relatively easy to put down. I think this is more about the differences between a stand-alone romance and a first in a series book than anything else.

I did find there was some discordance between actions and expressed emotions at times – usually this was with Cat. For example, she would express anger or some other negative emotion and the context was all in that vein – but the next instant she would laugh. I had some trouble reconciling that kind of reaction with the rest of the narrative.

At least in my experience, fantasy written in first person present tense is unusual. I’m used to it as it is common in new adult and I enjoy it but I also know that many readers dislike present tense (and/or first person) and I suppose this may be a deal breaker for them.

Griffin has a “Beta team” comprised of trusted comrades and soldiers, Flynn, Carver and Kato. I loved them and enjoyed their interactions with both Griffin and Cat.

The worldbuilding is complex but not overwhelming, with insights being doled out as needed for the most part, rather than in a massive info-dump.

I’m definitely in for the next installment in the series and I’m very curious as to what’s going to happen and just what is the mysterious prophecy which haunts Cat. At the same time, I felt satisfied enough with A Promise of Fire so I had no angst about finishing it.