REVIEW: Nothing But the Truth (and a few white lies) by Justina Chen Headley

The thing I find in YA books is alot of painful honesty that makes us grin (or grimance) in remembrance of those “good old days.” Patty Ho explores the challenges of trying to fit in with her Asian and Caucasian heritages. She is too tall for an Asian girl and too Asain for the white boys. She has a difficult time socializing with her mother’s Tawainese friends and their children nor does she feel part of her predominately white high school population. She feels disconnected from her mother whose whole goal is to see Patty get into a major college like Abe. Abe, Patty’s older brother , has been accepted into Harvard increasing the already high expectations of her anxious mother. When a “Belly Button” fortune teller forsees a white man in Patty’s future, her mother ships her off to math camp. 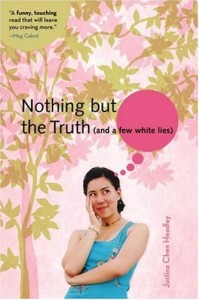 The misfit archetype is common in young adult, chick lit and romance. It’s used again effectively here. At math camp, Patty begins to accept herself and realizes that she is more than just Asian or just Caucasian and that her heritage is something to be celebrated rather than decried. I wish I had learned that lesson before the age of 30. Patty realizes how liberating it is to be free of the expectations she imposed upon herself by the classifications of her race. Acceptance of herself leads to greater acceptance and understanding of her mother. Learning a big family secret doesn’t hurt either.

What I didn’t like about the books were the cutesy Asian metaphors that appeared on nearly every page. It appeared that you were trying too hard to remind us that Patty was Asian when it was patently obvious. Perhaps it was your way to convey humor and the first few times, it was funny and the rest of the times, it was more gimmicky.

The YA books that I like go beyond whether so and so can get someone to accompany her to the Spring Dance, although that is an important goal for any teenage girl. As the title suggests, however, Patty learns that the truth about her life isn’t found in dating the Asian guy or the White guy, but rather in finding her place amongst the competing ethnicities that she felt were battling against her. This was a solid B work for me.