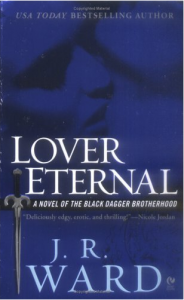 I really like the Black Dagger Brotherhood. I bought Dark Lover based upon the name alone. Black Dagger Brotherhood sounded menacing, dark and, of course, appealing. I liked Lover Eternal quite a bit but there are alot of negatives in your book. The plot is pretty simple. Good vampires who are tormented for centuries find troo love with woman who tames beast. Literally in this book.

The names, of course, are the first problem. Phury? Wrath? Zsadist? Rhage? These are names for the Wiggles impersonating a vampire clan. Not names of truly bad ass vampires. It shows a lack of creative imagination, frankly, despite your protestations on the internet that these names are based on the olde worlde spellings.

The heroines are a bit weak, too. They are individuals who need to be saved rather than do the saving. Yeah, yeah, I get that they have tremendous power in that they can tame the vampire beast, or in Rhage’s case, a real beast. But these aren’t women who kick ass, kill serial killers, and take names such as an Elena, are they?

And the homoerotic undertones – oh my. I think your boys have closet tendecies that all the rap music and “my brother” will not overcome. The sharing of clothes by your boys in the beginning of the novel? I can just see the guys from Queer Eye having the following exchange: Carson to Kyan: Where are all my black silk socks, sugar my brother? In the left drawer, honey, man.

And what is with the scribe virgin. She is a total wack job. Your description of her: tiny, enrobed in all black and whose face cannot be seen brings to my mind a cross between Tinkerbell and Palpatine from StarWars. So again, with all the problems in your books, why do I still like them? I like that Rhage struggles with his beast. The idea that the removal of the beast may represent a loss to Rhage even though he despises that part of him added depth to the character. I liked that it was Mary’s voice-the sound, the cadence-that soothed Rhage’s beast so much so that others around him became insignificant. I liked the sexual tension that was in the book due to Rhage’s fear of his beast destroying Mary. I liked the glimpses of the secondary characters, particularly Zsadist and Bella.

And why don’t I like any of your other books? Because I’ve read a couple of your Jessica Halls books and they were terrible. [Sorry about getting you and Ms Viehl err Hall mixed up]. I guess keep up the good work. But, one caveat. I understand that Zsadist is your next book and it has already been written but I hope you haven’t emasculated him while taming him. In fact, I hope he isn’t tame. After all, Phury described him as follows

“My twin’s not broken. He’s ruined. Do you understand the difference? With broken, maybe you can fix things. Ruined? All you can do is wait to bury him.”