If I were to ever write a book, I would want to write like you. Your stories of young womanhood and the pain of growing up are rendered with small strokes, small details, but with broad feeling. I can honestly say that there isn’t a book of yours that I haven’t loved. I have a young girl and will be setting aside your novels for her to read when she comes of age. When I went into this book, I had high expectations and while the book isn’t perfect, it was still a good read. 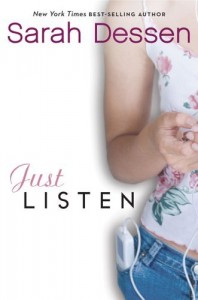 This is Story of My Life Annabel, who suffers a not uncommon high school experience, and who excels at avoidance. In the face of conflict, she runs. This hurts her and her friends and family. When Annabel begins a relationship with Owen, who specializes in truth telling, she begins to find courage within herself to face her worst fears and endure confrontation.

Annabel is a girl who seems like she has everything. She is beautiful, does modeling and comes from a seemingly perfect home. Her sisters all modeled but her middle sister is staying at home right now because she is recovering from a terrible bout with an eating disorder. Annabel no longer wants to model but her mother so clearly enjoys it that she is loathe to quit now. Annabel exerts her avoidance tendencies over every aspect of her life.

She is on the outs with her best friend, Sophie. Sophie is a mean spirited girl who has become Annabel’s worst enemy. It’s fairly easy to guess the cause of their falling out. Shh. It’s just me, Annabel. is your clue. Because of Annabel’s avoidance tendencies and Sophie’s bitchiness, Annabel is left to each lunch by herself. So she begins to sit at Owen’s table.

Owen is a young man who had to endure Anger Management classes after engaging in one too many brawls. For comedic relief, you pepper Owen’s language with Anger Management terms: IL – Inflammatory Language; R and R – Rephrase and Redirect.” To control his anger, Owen has become a truth teller. He tells the truth – all the time – rather than keeping things bottled up inside. What a great conflict you set up: The Truth Teller and the Conflict Avoider.

The biggest problem that I had with your book was Annabel. Her conflict avoidance tendencies created a huge gulf between herself and everyone around her that I was surprised at how easily Owen could forgive her or her friends could forgive her. Or maybe telling the truth and facing conflict does result in instant forgiveness. The subplot dealing with Annabel’s view of her mother (weak) and her sister’s eating disorder were topics that were mentioned and then glossed over. I am not sure what they served to do but be placeholders, as Owen would say. But the flaws were few and your writing, as always, was a wonder to read. B+