ummer Hawthorne, the heroine of the third book in your Ice series, is the curator for a Los Angeles museum that specializes in Asian art. She is also the owner of a blue ceramic bowl that her Japanese nanny entrusted to Summer just before she died. Summer's self-centered mother belongs to a religious cult known as the True Realization Fellowship. The group's leader, a Japanese man who is known as the Shirosama (Meaning “White Lord” in Japanese), covets the bowl, which Summer's mother has promised him. 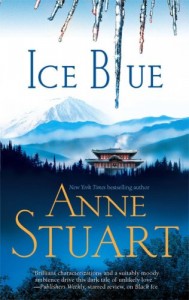 But Summer feels her mother had no right to do so, and she doesn't want the Shirosama to get his hands on it. When a bowl matching the description of Summer's shows up in one of Summer's museum exhibits, the Shirosama follows suit. On her way to her car that night, Summer is kidnapped by two of the Shirosama's men and rescued by a mysterious half-Japanese man, Takashi O'Brien.

Like the heroes of your previous books in this series, Taka is an agent and assassin working for the shadowy organization known as the Committee, which believes in saving the world by any means, including the killing of innocents. In the previous book, Cold as Ice, Takashi was captured and tortured after helping save the life of an innocent woman, and this is his first assignment since then. Taka tells himself that he's learned his lesson from that experience.

Now the Shirosama is planning terrorist attacks throughout the world, but only after he holds an important ceremony for which he needs the bowl, and knowledge of the secret location of a Japanese temple. He and Takashi both believe that Summer has that information. To obtain it as well as the bowl, the Shirosama intends to capture Summer and torture, then kill her. To prevent that from happening, the Committee's leader, Madame Lambert, orders Taka to find and kill Summer.

Though she doesn't fully trust Taka, Summer soon realizes that he's the only thing that stands between her and the Shirosama, so she allows him to take her into hiding. Summer was sexually abused as a child and has never truly enjoyed sex, but she finds Takashi almost mesmerizing in his beauty. Taka too feels a powerful sexual pull toward Summer. He realizes that killing her will only be harder if he gives in to the attraction, or allows himself to get to know her, but it becomes impossible for him to be as cold toward her as he would like.

I think that the Ice series is some of your best work and Ice Blue is no exception. I enjoyed it very much. First, let me say Yay! for Takashi O'Brien. I'm so glad that you and the folks at Harlequin / MIRA recognized that a hero with an Asian background can appeal to readers.

Takashi is a fascinating hero — dark, dangerous and conflicted, lethal and ruthless relative to most people, but not as ruthless as he wants to be, especially not where Summer is concerned.

Summer doesn't have the same kind of hypnotic magnetism, but she still held my interest. Several of the events in her past made her sympathetic to me, and I could understand why she blinded herself to the clues that would have allowed her to see that Takashi was ordered to kill her.

The last hundred or so pages of Ice Blue take place in Japan. While I'm by no means an expert on all things Japanese, the setting felt authentic enough to me. I would have liked more descriptions of the country, but I enjoyed the setting very much. I’ve always loved contemporaries set in foreign countries, so this was a treat. A Japanese side character named Reno was great, too.

There is a leanness to your writing that gives it a powerful emotional punch. Much of the time, you don't flinch from complicated, messy realities and the result is a gritty, spare and full of impact.

I think I would have enjoyed Ice Blue even more if I hadn't read Black Ice and Cold as Ice first. That's because some elements in these books, while very compelling, are starting to get a little repetitive.

In each of the three books the heroine is someone the Committee sees as expendable, and the hero feels he might have to kill her. In Ice Blue, this goes further than it did in the other two books –" Taka takes over half the book to come to the decision not to kill Summer. More than once, he puts his hands on her neck in order to break it, but can't go through with his intent. A lot of the book's power comes from the tension between Taka's desire to kill Summer and his more human desire for her as a person.

I found Taka very sexy, but I also had to ask myself what it says about me that a hero who comes close to killing the heroine three times is so compelling to me. My uneasiness with this aspect of the book interfered a bit with my enjoyment, and I liked the second half, in which Taka committed himself to saving Summer's life, much better.

Another element that was present in the earlier books is the hero's thoughts about his ability to use sex as a weapon and to break the heroine with it. In one scene, Takashi muses that:

He'd always been able to compartmentalize his life and his work –" sex was an everyday part of his job, one he did with his usual skill. It was said he could seduce a seventy year old lesbian and make her like it, and he didn't doubt it for one moment. Everyone had skills. Peter was a sniper, a born assassin. Bastien Toussaint could be anyone he wanted, and he was lethal with a knife.

Taka knew how to fuck. He could get what he wanted from any woman, no matter what age or sexual orientation. He had skills that would have made Casanova blush.

I had to laugh when I read this, because Bastien and Peter sure thought they were great at using sex as a weapon, too. It got me wondering if all the Committee's agents went around thinking they were the each the best at this particular skill.

I think the idea of characters who have sex as part of their jobs and use it as a weapon in a battle to save the world is terrific. I love reading about it because it makes for complicated characters and relationships. But it's not feeling as fresh to me as it did in Black Ice.

I also still miss the Committee as it was in its earliest and most ruthless incarnation in Black Ice. In Ice Blue, as in Cold as Ice, Madame Lambert was wringing her hands about each innocent life she ordered her agents to take, while she still gave those orders. Something about this seems a tad hypocritical. I think I'd find her a more interesting, and believable character if she compartmentalized the way her male agents do, or at least tried to. Her inability to do so doesn't quite jibe with the nature of her job and her past history as an agent herself.

Such are the pitfalls of series –" elements can start to feel repetitive from book to book, or aspects of the different books can seem inconsistent with one another. These issues are present here, but so are some enormously satisfying aspects of this book. For all these reasons, Ice Blue isn't an easy book to grade. My head wants to give ita B- and my heart want to go with a B+. And so, I split the difference between those two grades and give it a B.