I think that you are an underrecognized author who is on the cusp of a real breakthrough. Your entry from the Luna line was smart and funny. 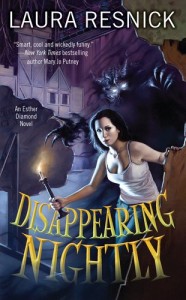 The romance in this story is sparse but provide some of the best scenes. I hope you don’t mind me liberally quoting from your book but your dialogue is so superior than any words that I could use to describe it.

Lopez had a nondescript car parked illegally near the magic shop. A handy official notice propped in the window warned other cops not to make the mistake of assuming that parking statutes applied to this vehicle the way they did to others.

He opened the passenger door for me, then got into the driver’s seat while I buckled up.

“Where to?” he asked. He kept his gaze forward and was frowning slightly.

“I haven’t had dinner yet,” I heard myself say.

He let out his breath and leaned his forehead against the steering wheel.

We were silent for a moment, not looking at each other.

“We can’t have dinner together,” he said at last.

“Yes, you were.” He lifted his head and sat back.

In for a penny, in for a pound, so I said, “Okay, why can’t we have dinner together?”

“I can’t date someone who’s part of a current investigation.”

“Yes, it would,” he said, “and you know it would. You know it’s been on my mind ever since I saw you without glitter and green body paint all over everything but your teeth.”

He gave me an exasperated look. “No, I always make inappropriate comments when I’m interviewing women, Esther. It’s my ambition to get suspended for sexual harassment.”

Look – a cop who actually doesn’t sleep with a suspect. The cop is smart. He is able to put 2 + 2 together and get 4. He’s able to pick up on subtle clues and he does actual investigating. Esther is great fun herself and the twist at the end (as to who actually is the virgin who gets sacrificed) is a complete hoot. I really hope to see more of Lopez in the next book.

I could probably quote for a year from this book but I won’t. Okay, just one more scene? I loved the breakfast scene.

Off the record or not, he was on the job again. “Esther, just tell me straight up. Do you really believe the stuff that Max Zadok was spouting in my house yesterday?”

“He went to your house?” I said, puzzled.

“You tell me something straight up,” I said. “Are you satisfied that he’s no threat to–“” I stopped when I heard an unfamiliar jingle. “What’s that?”

“Excuse me.” He reached into his pocket and withdrew his cell phone, then frowned when he read the caller ID. “I’d better answer it. She’ll just keep calling every twenty minutes if I don’t. I’m sorry, Esther. This won’t take long.”

He flipped open his phone and, with a look of long-suffering patience, said, “Hi, Mom.”