Warning: mysqli_query(): (22032/3141): Invalid JSON text in argument 1 to function json_contains: "Invalid value." at position 0. in /home/customer/www/dearauthor.com/public_html/wp-includes/class-wpdb.php on line 2187
 What Janine is Reading: a YA Novel and a Political Thriller
April 29, 2022

If This Gets Out by Sophie Gonzales and Cale Dietrich

After enjoying Sophie Gonzales’s 2021 YA novel, Perfect on Paper, I decided to try this one, also YA, since it had been recommended by Dear Author commenter Susan S. 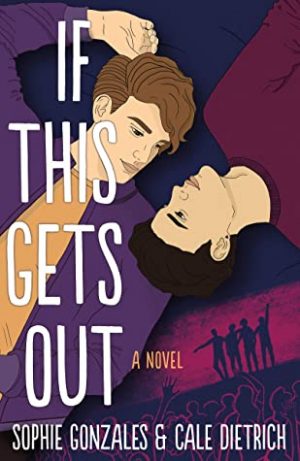 Like Perfect on Paper, If This Gets Out has queer characters, in this case two eighteen-year-old boys in a boy band called Saturday. Zach and Ruben are friends who support each other through the turbulent life of being teen celebrities. Ruben has also been in love with Zach for a long time but believes Zach to be straight, so he’s never tried to take their relationship beyond friendship.

Zach, though bisexual, also believes he is straight (he’s been attracted to boys before, but is in denial about his sexuality), so when he starts feeling attracted to Ruben, he gets a bit uneasy, and after they share a hot kiss (Zach is drunk at the time) he freaks out. It takes him a little time to sort out his feelings. I enjoyed this initial conflict but was glad it wasn’t dragged out too long, because poor Ruben. But this straightened out pretty fast and once it did, the relationship became really sweet.

The bigger conflict is that Saturday’s manager and their record company make it difficult for the boys to come out, much less go public with their relationship. Most of Saturday’s fans are teenage girls and many of those fans crush on the boys, so their manager and record company feel that if Ruben and Zach go public it could derail the success of the band.

(I wondered if this would really happen these days. In my teen years, certainly, but teens today are so much more accepting of queerness. Then again, I live in a very blue city within a blue state, so my perspective could be distorted.)

This also creates a conflict between Ruben and Zach. Ruben has a nonconformist personality and he chafes at being silenced to a greater degree than Zach does. Zach is more trusting of the manager as well as a people pleaser. It’s a struggle for him to see the problem in its full scope and to stand up for them and for what they (Ruben especially) need.

Besides this there are other conflicts. The other two boys in the band and aren’t allowed to be themselves either. Angel (a nickname) wants to be sexy but has to play the nice boy. Jon is a sweet straight arrow but as the one with the sexy bad boy image, he is made to wear revealing clothes he’s not comfortable wearing. Jon is also the son of the band’s manager and is constantly under even more pressure than the other three boys because of it. His father arranges more publicity and attention for him from the media, too, creating resentment in a couple of the other boys.

There’s some diversity here; Jon and his mother are Black (his dad is white) and Angel and his parents have a Chinese background (despite his name, Ruben is actually white; his parents are from Spain and his background isn’t Latin American).

The band is so controlled by their management that the boys feel they have no room to breathe. As a consequence, Angel gets into drugs and becomes more and more reckless. All four boys love each other and as this problem gets worse, Ruben, Zach and Jon worry more and more about Angel.

If This Gets Out is narrated in first person; chapters alternate between Zach and Ruben’s POVs. I don’t know if each of the authors wrote one of the characters’ chapters or if they co-wrote all the chapters, but I liked Zach more than Ruben. I loved his sweetness and sincerity; he was earnest and lovable. I had such sympathy for him (maybe I just related more because I’m a people pleaser too). But I enjoyed Ruben’s sections as well. He had been wanting to come out for over a year and I hated that the management company kept saying that it wasn’t the right time.

The writing is tight and the book is a page turner; I stayed up until 4:30 AM reading. Jon and Angel were likeable characters too, and I also liked that all four boys were close and genuinely cared about each other.

(I wondered if when Ruben and Zach told the others about their relationship the friendship dynamics between them and Angel and Jon would change. It didn’t make much difference but I’m not sure I buy that it wouldn’t, especially given how much time all four boys spent together and the close quarters they shared in rehearsal and on tour buses, as well as the fact that because they weren’t given free time to spend time with other friends, all their social support had to come from each other. It helped that Ruben had been out to Zach and the others for years before the book began, though.)

The boys’ home lives during their brief breaks from touring were underdeveloped and their relationships with their parents felt oversimplified.

Until about 10% or so from the end, I was loving If This Gets Out. It read as well-researched to me (although not being an expert, I wouldn’t know for sure) and that made it feel really compelling. But near the end, the book lost some of that believability. Everything was wrapped up too neatly. I wanted a happy ending, I just felt it was a bit of a stretch to believe this one. Then again, maybe there was no other way to make this ending happy but to stretch believability. In any case I still like the book a lot, but it’s a B/B+ for me instead of the B+/A- it was heading for.

While Justice Sleeps by Stacey Abrams

I was drawn to this political thriller not just because the premise of the plot sounded very good but also because I really like Stacey Abrams as a leader. 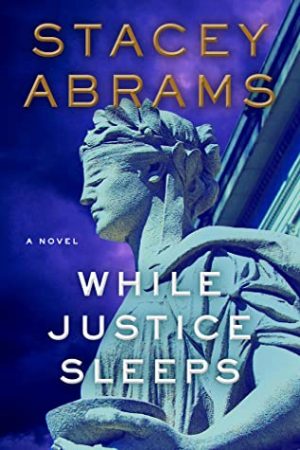 Avery Keene clerks for a Supreme Court Justice, Howard Wynn. Early on in the book, Justice Wynn’s medication is tampered with and he ends up in a coma. Mysteriously, it turns out Justice Wynn named Avery as his legal guardian despite the fact that they’ve never been close.

Avery’s guardianship of Justice Wynn is contested by Justice Wynn’s ex-wife, who was previously his healthcare proxy and who wants to take him off life support. An important case is about to come before the Supreme Court and the court’s ruling may depend on whether Wynn survives and returns to the court in time to weigh in.

Justice Wynn has also left Avery some documents and clues that he wants and his son Jared to follow (Jared has a military intelligence background), a kind of scavenger hunt, if you will. Avery takes on the challenge and persuades Jared to help her. As they hunt for more clues, they begin to uncover information about unethical and potentially criminal actions taken by a bioengineering pharmaceutical corporation. Not surprisingly, the corporation’s profits depend on the outcome of the SCOTUS case.

Avery and Jared are aided by Avery’s friend and roommate, Ling (conveniently, Ling is a medical student) and by Noah, the lawyer retained by Justice Wynn to pass on the documents to Avery. The four face danger from a Homeland Security elite force that tracks them for the corrupt US president who is in league with the pharmaceutical firm. This conspiracy is a threat not just to Avery and her friends, but, as we eventually learn, has global implications and could harm many others.

In terms of diversity, Avery and her mom are Black, Ling is Chinese-American, and Noah, if I remember right (I read the book in July), is Jewish.

I liked the setting details about the inner workings of the Supreme Court. The book’s concept sounded suspenseful and interesting, and although the scavenger hunt piece was a bit cheesy, I think the execution could have been suspenseful and interesting too. But my enjoyment was marred by several plot holes and some of them made characters on both sides of the conflict read as incompetent.

While protecting Justice Wynn, Avery enters his house to look for more clues using security codes that he left her. Before this point in the story Avery stumbled on the dead body of Justice Wynn’s former nurse but when this scene takes place Avery is not yet certain that the nurse’s death was the result of foul play. But she has suspicions, and despite them she doesn’t re-arm the security system after entering the house. Of course, she is struck on the back of the head and information she found in Justice Wynn’s safe is stolen.

The robbers (a secret DHS unit) who attack her are also sloppy. They take the cash from Justice Wynn’s safe to make their actions look like a garden-variety home robbery, but also remove a page with some of Justice Wynn’s important clues from Avery’s purse. They take only the page and not the whole purse, thus defeating their “make it look like a robbery” purpose. And they are supposed to be elite.

Besides this, it’s also not clear why Avery chooses to involve Noah in her investigation. Unlike Jared, he doesn’t have personal stakes in Justice Wynn’s survival. Unlike Ling, he doesn’t have personal stakes in Avery’s. Avery isn’t attracted to Noah as she is to Jared, either. And Avery and Noah are basically strangers when she recruits him to help her; they’ve had only one interaction prior to that and that interaction was strictly professional—an appointment in Noah’s law office where he passed her a sealed envelope that Wynn left. Avery knows that she can’t trust other people not to be working or at least cooperating with the bad guys, so why on earth would she ask Noah, a stranger, to help her out?

I didn’t understand why Noah would involve himself in the cloak-and-dagger stuff either. Justice Wynn had retained Noah and it was by extension Noah acted as Avery’s lawyer, or rather as the attorney for the trust Avery was in charge of. But Noah’s aid to Avery in this book went far beyond lawyerly and it put his life and possibly also his career at risk. So what was his motive?

Later in the book, Avery, Jared, Noah, and Ling are holed up in Avery and Ling’s apartment, sharing information about their investigation and discussing what to do next. Even though Jared previously worked for military intelligence and they all know by then that professionals attacked Avery and are watching them, it doesn’t occur to Jared or to the others for quite a while that the apartment could be bugged.

Also, why don’t the bad guys kill Avery and her friends? The story eventually reaches a point where killing the group would have required less effort and been less risky than merely trying to thwart them. The DHS unit was well-versed at covering up killings. They were responsible for other disappearances that they made look plausible, and they had the president’s backing and protection as well. There are more plot holes than just these, too.

I admire Stacey Abrams’ leadership and political activism but unfortunately, her book didn’t work for me. However, it reminded me very much of John Grisham’s thriller, The Pelican Brief. The Pelican Brief was a big bestseller but one that I really disliked. So if you’re one of the many, many readers who, unlike me, liked The Pelican Brief, you might also like While Justice Sleeps. C.