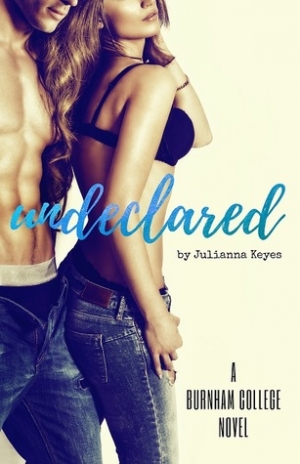 I loved Undecided last year – there really are too few books featuring amateur magician heroes. While it’s not necessary to have read Undecided before Undeclared, I do think there is an advantage to the reader who does. They’re both great books so that’s a feature, not a bug IMO.

In Undecided, Crosbie (the amateur magician) and Nora fall in love but their path to happiness is marred by a drunken hook up Nora had with Crosbie’s best friend, Kellan, (prior to Nora and Crosbie getting together). Kellan had been a prodigious man-ho in his first year at Burnham College and at the beginning of his second year, he is diagnosed with gonorrhea. That diagnosis forces him to recall the 60+ women he’s hooked up with since he arrived at college – all of whom are referenced in an infamous list in the Student Union men’s restroom. Kellan’s list is the longest. Some of the “names” on the list are mere descriptions – “smells like french fries”, for example. In contacting all of the girls to let them know they should get tested, he faces some hard truths about himself. He decides his third year of college he will be “Kellan 2.0”.

Undeclared is told entirely from Kellan’s first person POV. The things that drove him to strut around the college and collect names for his list are revealed and as a result, there’s more context to what came before.

Kellan grew up next door to Andrea Walsh. Andi has been both his best friend and his nemesis ever since they both started first grade wearing the exact same superhero t-shirt. Andi is very sporty and athletic and joined in with the other boys in any activity they did as kids. Andi was most often better at it than the boys were. Kellan and Andi used to talk long into the night over the three feet separating their respective bedroom windows.  And, in the summer before Kellan started college at Burnham, he and Andi “practised” sex so he wouldn’t be a virgin when he arrived at school.

Kellan went to Burnham on a cross-country running scholarship but Andi couldn’t afford to go as well and has been working at home in the small town of Avilla in order to save so she can complete her education. During their summer of sex, Kellan was surprised to find he developed more romantic feelings for Andi. Everyone knows that Andi has always been in love with him. Kellan pretends ignorance because he can’t say it back. When he leaves Avilla he wants to spread his wings, see what’s out in the big wide world and he sees Andi as something which might only tie him to the small town he’s desperate to leave.

Kellan doesn’t know what went wrong exactly but suddenly, as their summer idyll was drawing to a close, Andi stopped speaking to him. They haven’t spoken for two years. He was heartbroken, despite not admitting to anyone, not even himself really, his true feelings for Andi. And so, in part, when he was hooking up with all those girls, it was to prove he didn’t need Andi, to prove he was over her.

When Andi arrives at Burnham on a volleyball scholarship, Kellan is stunned. He’s also hurt when Andi doesn’t want him to acknowledge they know each other and, to his vast surprise, jealous when Andi attracts the attention of other athletes who think she’s hot.

I admit it took me a little while to get into Undeclared. I can’t say for sure whether it was the book or it was me. But in any event, by about the page 50 mark, I had become hooked and then I stayed up way too late reading two nights running so I could finish it. Given that’s the case, I expect the stuttering start was probably on me.

The delight of the romance between Kellan and Andi is their long, shared, history. They have a competitive, push-pull to their relationship which has not always been comfortable. Kellan describes her as both his friend and his enemy in basically the same breath. It’s easy to see why, as their banter reveals humorous glimpses of the pair growing up together.

Her hair is long and loose, and if I thought my obsession with her hair ended the day I cut off an inch in sixth grade math class and she punched me in the nuts, I was sorely mistaken.

For all that Andi has clearly been desperately in love with Kellan for the longest time, she is not at all desperate. She gives him back as good as she gets and she always has.

“It’s as funny as the time I zipped that rat inside your duvet cover.”

“That wasn’t funny either. You’re not a funny person.”

Andi is a tomboy; she’s not good at many of the “traditional” girl-activities – which explains why she spent all her time hanging out with the boys as a kid. She’s all woman though and it’s a fun flip on gender stereotypes that Andi can’t cook and Kellan is really good at it.

Andi was always the kid who brought packaged cookies and store-bought pies to school events. The one time she and her mom tried to bake something the fire department had to visit their house twice and the grocery store ended up giving them a free cake.

There is also a wonderful sense of friendship and camerarderie between Kellan’s crew, who soon welcome Andi into the fold with open arms. I laughed quite a few times, both at Kellan’s and Andi’s antics but also at events such as the “Puntastic” Halloween party the group attend later in the book.

I pause the game to check out Marcela when she emerges from the bathroom. She’s wearing her high school cheerleading uniform, which consists of a short white top, pink skirt and matching knee socks. She has two pom-poms clutched in her hand and has added glittering letters to her chest that read “GOOOO CEILING!”

“Gooooo ceiling!” Marcela cheers, waving the pom-poms and kicking up her leg. “Get it? I’m a ceiling fan.”

Choo tries to look amused but winds up looking constipated instead. “Right,” he says. “Very clever.”

“You glued some chicks to a magnet,” she points out. “Don’t judge.”

There is usually a coming-of-age aspect to new adult books and Undeclared is no exception. Kellan continues the journey he began the year before but this time he also ponders deeper emotional connections and his future outside of college. The title is both a reference to the fact that he has yet to declare a major (and is getting a lot of grief about it from his course advisor, Bertrand) and his unexamined and unspoken, deep and complicated feelings for Andi. By the end of the story, Kellan makes a number of important decisions but not before coming close to cocking it all up as well – of course.

Because it was told from Kellan’s point of view, I had a really good handle on his motivations so I was more inclined to cut him some slack when he messed up. His occasional cluelessness and his reticence were far more understandable from inside his head. Still, I also felt like I had a good idea of what made Andi tick as well – there’s plenty of action and dialogue to show where she is coming from and I really appreciated the showing being featured above any telling.

Kellan is often confused by his feelings for Andi and scared of making decisions which, in his mind, box him in. It’s not until he reframes his viewpoint that he can see things differently. The infamous bathroom list is a spectre which looms large in both books in the Burnham College series and I appreciated that it was used to examine some issues about masculinity and feminism and that it was part of the backbone of this story as well.

“That list was after you, and before you. There’s never been a during. You drive me fucking insane but when you’re in the picture, you’re the whole thing. You’re all I see.”

I gave Undecided a B. I can’t think now why I didn’t give it a B+. I don’t think that Undeclared was better (I thoroughly enjoyed them both) and I’m giving it a B+ so maybe I should go back and amend my grade…