REVIEW: The Spinster and the Rake by Anne Stuart

>Boy howdy some of your earlier regencies, gothics and contemporaries sell for a mint. Are they worth it? Well, in this case, yes, Virginia, there is a Santa Clause and this one is worth the money. It’s a light hearted romp with the proverbial regency characters of a spinster and a rake. Now really, what else should readers expect from the title? 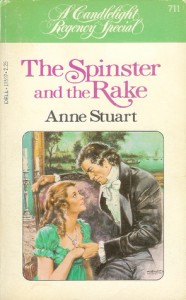 The Spinster, Gillian Redford, is not a bluestocking but rather a woman who’s played nursemaid and housekeeper to her two older sisters and sister-in-law and is fast approaching thirty. Old-maidhood. While traveling back to the London home of her stiff-rumped brother, her carriage runs off the road and she ends up being rescued by The Rake, Ronan Patrick Blakley, the new Marquis of Herrington along with his drunk friend Vivien Peacock. After dropping Gilly off, the two make a wager that Ronan can get Gilly to fall for him within two months. He does but winds
up falling for her at the same time. After a flurry of plot twists, all’s well that ends well between the two plus we get a nice secondary romance for Gilly’s niece and the clergyman who thinks Felicity is far too good for him and who has to be made to see the light.

I loved Gilly. She has a nice sense of humor and manages her sibling’s households with a deft touch. Even the servants love her. Her nieces and nephews adore her and it only takes the right man to see her true worth. Ronan starts out as a care nothing rake who bitterly watches London society race to embrace him now that he’s a peer where before they had shunned him after a fall from grace. He and Gilly engage in some wonderfully witty banter that had me smiling.

You don’t overdo the standard regency London rituals but do bring a villain to the front with only a few hints as to his character. This one should definitely be read as a farce and gets a B+ from me.