REVIEW: A Dance With Danger by Jeannie Lin

I selected this for June’s TBR Challenge category (more than one of the author’s books in the TBR), which is cheating slightly because I’ve only had it since April (when it came out), but it is on my TBR list. Jayne wrote a terrific, comprehensive review when the book was released, so I’m going to indulge myself and talk about it more informally here. 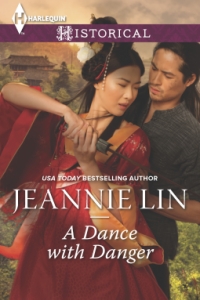 A Dance With Danger is a followup to The Sword Dancer from 2013, which I loved. Oh, what am I saying, I love every Lin book I’ve read over the last two years. I think what makes the books so memorable for me, and so satisfying, is that the combination of world-building, cultural detail, and a full-blown romantic storyline. You don’t have to sacrifice one of these aspects to get the others. The romances are less emotionally explicit, I suppose, than we get in a lot of historical romance, and you get more cultural context for the love story (which also works against high-emo romances), but for me that makes the story richer. I have to believe that the relationship is going to persist, and a romance that doesn’t acknowledge the context in which it develops and is embedded rarely convinces me.

I’m coming to think that Lin has a partiality for somewhat raffish, not entirely trustworthy heroes. Bao Yang has escaped from prison after a failed attempt to assassinate a warlord. He comes back to try and finish the job and winds up married to the daughter of the magistrate who had conspired with him in the assassination plot. But then the magistrate turns on him and Yang has to leave town in a hurry. Once Jin-Mei, his bride, realizes he’s probably still alive, she takes off after Yang and their road romance turns into a real marriage, albeit one that has plenty of stumbling blocks in its path. Yang is determined to succeed in his plans this time, and their travels turn from running away to building an insurgency that can carry out Yang’s plans.

As in previous books, the romance is shaped by the cultural constraints of the time. Bao Yang is forced to offer for Jin-Mei after he is caught in a compromising position with her, which is of course a historical romance staple. But the way each of them approaches their “arranged” marriage isn’t one I see very often in UK-set historicals. They accept their union practically and quite cheerfully, in a way that feels authentic to Asian attitudes toward the institution of marriage and the functions marriage serves for families and communities. From the beginning Jin-Mei wants a real marriage, and it’s Yang who holds back because he’s afraid of committing fully to her when he may not have a future to offer.

They do fall in love, but Jin-Mei repeatedly distinguishes between her emotions for Yang and her ability to trust and respect him. Similarly, there are some great passages in which she observes how knowledge about the mechanics of physical intimacy doesn’t necessarily tell her about emotional and mental intimacy, and she wants all three to fit together. As in Lin’s other books, each scene of physicial intimacy advances the plot and the relationship, and they show us aspects of the characters that we haven’t seen before.

Another touch I liked a lot was that Yang was quite the ladies’ man and some of those ladies are still around and important in the story even after he’s married. But while Jin-Mei eyes them askance when she meets them, she accepts Yang’s assurances that the relationships are over. Her mistrust isn’t about the women in his past, but about his present actions. She believes in his feelings for her, but she needs those emotions to be grounded in a life of integrity and honor.

If you haven’t read the previous book you won’t be familiar with some of the supporting actors, but this story stands alone without any difficulty. I enjoyed seeing Li Feng and Han again, as well as Li Feng’s brother, who is trying to make a new life for himself but is dragged back into Yang’s plot. The world created here is somewhat unusual, because most of the action takes place outside the cities, on riverboats and in remote villages. The final confrontation is well staged and contains some surprising turns, and I liked the way almost all the various storylines were resolved in the end. The one that remains will, I hope, get a novel of its own, because I’d love to read more about both of those characters. Grade: B+