I was unsure how to address my letter because you are a mother-daughter writing team. Neat. I understand that you are a bestseller in the UK but not here in the US. Those Brits have good taste. As a general rule, I don’t read books without romances and your books are solidly within the mystery/police procedure. However, I do love a good police procedure book. What keeps me reading, besides your excellent plotting, characterization and mysteries is the lovely, understated romance thread that meanders through all four of your books. 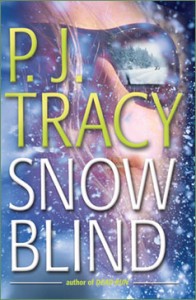 If the reader wants to grasp the true magic of this relationship, she will have to start at the beginning which is Monkeewrench. I loved MonkeeWrench and Live Bait. I liked Dead Run less because the plot seemed a bit too implausible. Overall, though, your research appears to be impeccable. Your detectives utilized appropriate investigative techniques to catch criminals and solve crimes.

Leo Magozzi and Gino Rolseth are two homicide detectives with the Minneapolis Police Department. Gino is scheduled to do a charity event during WinterFest, an event that happens each year in Minneapolis to celebrate winter. Having been to WinterFest a number of times, it was neat to see it reenacted in your story. One of the events that takes place during WinterFest is a snowman making contest. Gino is making one and has enlisted Leo to help him. Only toward the end of the making of the snowmen, a child finds a body inside one of the snowman as the sun begins to melt away the snow covering. This discovery leads to another body inside another snowman and one by one all the snowmen are completely destroyed. This is an evocative scene and sets the murder mystery stage perfectly. The identity of the snowmen is a shock and the existence of two dead bodies seems to signal serial killer. When another person is found in a snowman in a small northern county, the trouble becomes even more dire.

The search for the killer takes Leo and Gino north to Dundas County where a former school teacher with no previous investigative experience is the newly elected Sheriff. The improbability of this event is reasonably explained and dovetails perfectly into the overall plot. One of the great skills you two authors have is that each character that appears on the scene is three dimensional. We see their weaknesses and their strengths. Not one is all villanous or all good. Your characters are human and real. You also managed to tie in the Monkeewrench crew, a group of computer experts, organically. Their mysterious connection to Dundas County was deftly included. The issues that you raised in the book were provocative and I appreciated the ending showed us the absence of absolutes. Again, that was a very human, real touch.

One other thing that I reveled in was another installment in the slow developing romance between Leo and Grace McBride. Grace McBride, the head of the Monkeewrench crew, has serious issues which are more fully explained in Monkeewrench. We see a loosening of Grace’s hold on her control over her world as it expands, more fully, to include Leo. It’s quite romantic for me and I confess to reading each installment of your series just for these small glimpses. The fact that you write good, believable police procedure stuff is just icing on my cake (even though its probably the cake for most people). This is a B+ book for me.