Elle Kennedy writes a series of novellas for Samhain Publishing called “Out of Uniform” and primarily these stories feature the romances of the Seal Team Fifteen. There are two primary storylines in these stories. The first is the friends to lovers and the second is the player who doesn’t want to settle down but in a fun twist, the player is usually the woman! The other thing that is a trademark of this series is the hot, but good natured sex. And finally, the interaction between the male characters sounds very authentic. They rib each other, play together, make suggestive comments, and even give each other (often hilarious) relationship advice. I inhaled these 7 books, buying them one after the other at Amazon for around $2.50 a piece.

They all have the same flaw too. The books are too short for the conflicts that are presented and I didn’t necessarily believe in their “I love yous” even though I wanted to. I would have loved to have read these all in category format rather than novella format. 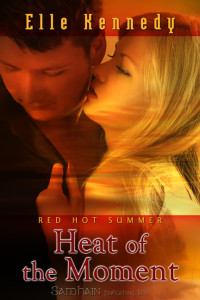 Heat of the Moment, pubbed June 2008. This is the first book and I wondered if it was the shortest of all. The romance relies heavily on the idea that much of the build up to the romance took place before the story started. Bakery owner Shelby Harper has lusted after John Garrett for over a year but overture after overture has been turned away. John, for his all his reported reputation as a ladies’ man, has not been ignoring these signals. In fact, he’s been sending out some subtle signals of his own but Shelby never responds to him. I guess John thinks that Shelby’s flirting with him has been nothing more than friendly talk. One night, while the team is hanging out at her bakery during a blackout, enjoying her television and the Padres game, she overhears John talking with another teammate about her that perhaps Shelby is too innocent for a guy like John. Shelby decides to prove that she isn’t as vanilla as John suspects and propositions John and his teammate to a threesome.

John and Shelby’s ineptness at getting together is kind of laughably bad. I mean, John makes some comment about wanting to fondle her breasts but Shelby doesn’t see this as coming on to her and Shelby is rubbing an icecube all over her chest and John doesn’t get that she is coming on to him?

And for all Shelby’s desire for John, it is tempered with the fact that her ex was a marine who cheated on her regularly. She’s a bit gun shy on signing up for another relationship with a guy who is a) a well known man whore and b) who is a Navy SEAL. I liked this conflict and wished it would have taken precedence over their mistaken, requited lusts. The menage, while hot, seemed awkward and misplaced and in a short space, that sex scene could have been a catalyst for something more meaningful rather than just a “let’s get dirty” scene for a conflict that had a weak underpinning. C 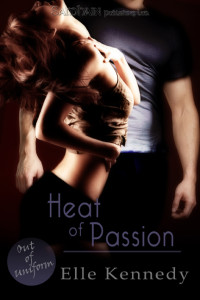 Heat of Passion, pubbed May 2009. This one is my favorite of the series. Carson Scott is the teammate in John’s book that serves as the third in John’s reluctant menage. Carson is another man whore who has come to the realization that he really doesn’t want to live that life anymore, particularly after seeing how happy John and Shelby are. His resolution to start a meaningful relationship is ground to dust though when a sexy brunette invites him to dance and then lures him into a supply closet. Carson has ground shaking sex with the girl named Jessica, but she flees before he can get any information from him. Carson is actually a bit disgusted at himself and wonders when he became “that” guy, the guy that has nameless sex in supply rooms in bars.

He spots the mystery girl waiting tables at his friend’s wedding and tries to strike up a conversation with her. Maybe their great sexual chemistry can be the basis for something more permanent. The problem is that Holly Lawson (aka Jessica) is too busy for a boyfriend. She’s trying to finish cooking school, start a catering business, deal with her family who has come to rely on her after their mother died. All she wants is the anonymous hot sex in a supply room closet at the bar. It’s all she has time for. But when she sees Carson again, the lust neurons fire up and she proposes a casual sex only fling.

For a short this story is replete with fun fun scenes. For instance, at the wedding, Carson is so intrigued by Jessica/Holly sighting that he inadvertently makes a noise right at the point the priest asks if anyone is objecting to the union:

Garrett and Shelby instantly swiveled their heads in his direction, shock clearly etched in their faces.

"What? No," Carson said quickly, keeping his voice low. He turned to the preacher. "No. I'm not speaking. I'm forever holding my peace. These two belong together. Please, just go on."

"I'm going to kick your ass for this," Garrett muttered before turning his attention back to the ceremony.

Shelby just glared at him.

Fuck. Wonderful. Now everyone and their mother would think Carson objected to this union. Damn caterer and her broken bra.

Then there is the mini golf game Carson has with his teammate and superior officer, Will Charleston. LT Charleston has a habit of calling Carson “Ensign” when Charleston was feeling cranky. And speaking of authentic banter:

"Okay, best friend." Carson started the car and reversed out of the parking spot. "So this best friend, what does she do, you know, for a living?"

To Carson's extreme astonishment, Will let out a long, genuine laugh. "Actually, no. Her jewelry sucks. She knows it, everyone in town knows it, but people humor her because she won't accept money for-‘" He halted instantly.

Curiosity trickled through him. "She won't accept money for what? Oh man, is she a hooker?"

"She's not a fucking hooker," Will shot back, his features twisting with fury. "Jesus."

"Then what does she do, aside from making bad jewelry?"

Will laughed. Jeez, two laughs in the span of ten minutes.
Maybe he was drunk. "Since when do you date?"

The other man nodded wisely. "Ah, so you realized it's time to grow up."

"From what I know so far, yeah," he admitted.

Will gave a careless shrug. "Then have sex with her."

"Did you not just hear a word I said?" Carson said in frustration.

"Sure I did. But the way I see it, it's your in. Call her up, tell her you're up for a fling, and then slowly work on her to try the dating thing."

"She was pretty determined to do the fling thing, man."

"Then change her mind. You're a SEAL, she's a cute little waif. How hard could it be?

For some reason, Will calling Holly a cute little waif had me laughing out loud. Why? I have no idea. Don’t judge me.

and the good natured sex:

"Damn. I won't last long," he admitted in a raspy voice.

"Then come. You know, to take the edge off," she said, mimicking his earlier words. "But next time, I expect at least a full hour of serious thrusting and pumping to make up for this debacle."

So yeah, I enjoyed this one a lot. In fact, Holly and Carson are my favorite couple of the series and they appear in later books, much to my amusement. I thought the conflict was well suited for the length of the story and believably resolved. This was definitely worth the $2.50 I paid for it and then some. B+ 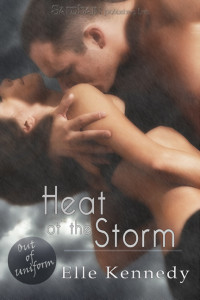 Heat of the Storm, pubbed July 2009. This one is about Will and his non hooker psychic childhood friend who he has loved since they were kids. Will has always allowed himself to play the friend role for Mackenzie even though it kind of kills him to see her with other guys. Mackenzie has loved Will since they were kids too, but he’s the one stable thing in her life. She has no one if she doesn’t have Will and so she isn’t about to ruin their friendship with sex and love, neither of which last.

Will has decided he is tired of waiting and catches Mackenzie with her guard down and they proceed to have lights out sex but that isn’t enough to make Mackenzie acknowledge that a relationship could work for them. Let’s face it. Mackenzie is kind of a dimwit. I understand her reluctance to proceed with a meaningless relationship but she’s known Will for years. Either she knows he is a devoted stand up guy or she doesn’t. Her psychic visions which have ominous warnings is a weak excuse for not becoming involved with Will. She is already involved and the portrayal of her as the reluctant makes her appear myopic. Maybe her inward eye is too focused on what was happening in the future than what was right before her face.

What saves the book for me are the shenanigans that Holly pulls to get Mackenzie jealous. Will takes Holly home to his small home town as his girlfriend to see if this will force Mackenzie’s hand. I appreciated that Will finally got a backbone where Mackenzie was concerned but the years that he allowed himself to be categorized as “just friends” was a challenging for me to believe. (I also appreciated that he wasn’t a manwhore like the previous two SEALs). C+

Reviews of the following will be posted tomorrow.

→ Jane
Previous article: Friday Midday Links: Dorchester reportedly selling books it doesn’t own
Next Post: REVIEWS: Heat It Up, Heat of the Night, The Heat is On by Elle Kennedy