REVIEW: You Know When the Men Are Gone by Siobhan Fallon 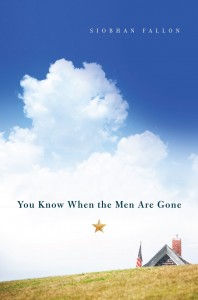 I am a romance reader and rarely read non fiction. While this collection of stories are fictional, they are loosely based on men and women that live in military bases probably across the world. I don’t doubt that these stories have been replayed a thousand times in the real lives of individuals who have sacrificed these last nine years during the war. And for every man who is putting himself on the line, there is a family back home that is struggling to keep things together.

The stories run the gamut from the exultation of a couple reunited to the ruination of those whose relationships couldn’t survive the separation, the infidelities, or simply the emotional toll. Many of the stories do not have a happy and perfect ending, but the emotion vibrates on each page. I could not put the collection down until the last story was told and the sacrifice made by those that serve will linger on for many years in my memory.

Life inside the fenced military base is completely different than a civilian’s neighborhood. There a woman’s tardiness in making her oncology appointment generates a phone call to her husband’s superiors. There gold star parking spaces are reserved for widows. There a logistical team of wives keep other wives informed of their husbands’ safety and their injuries and deaths.

You also know when the men are gone. No more boot stomping above, no more football games turned up too high, and best of all, no more front door slamming before dawn as they trudge out for their early formation, sneakers on metal stairs, cars starting, shouts the windows above to throw down their gloves on cold desert mornings. Baby still cry, telephones ring. Saturday morning cartoons screech, but without the men, there is a sense of muted silence, a sense of muted life.

You Know When the Men Are Gone. A Kosovian woman with twins move in upstairs from Meg. She speaks almost no English, she allows her husband’s dog to defecate recklessly, and appears to be an indifferent parent. However, she and Meg share the same pain of loneliness. Meg can hear her cry at night, much as Meg cried herself to sleep. They also shared the same goal — the safe return of their husbands but the Kosovian woman is burdened from her own war past, her inability to speak English. The loneliness made all the more acute by her separation from the other wives.  Meg learns all of this during the time that her husband is gone.

Camp Liberty. David Mogeson, or Moge to his army peers, was an investment banker in his former life. But 9/11 changed him. Unwittingly Moge is well-suited for the military and is promoted almost against his will. As he becomes assimilated into the Army, Moge loses parts of himself and it’s not clear whether he’s losing the better parts or the worst parts. The Army was bringing out leadership qualities he hadn’t exhibited before. He cared deeply for the men for whom he was responsible. He began to care for his female translator. But he had a family and a life back home, one that he could barely relate to when he returned on leave. The cold that hounded him during his two week leave in the Hamptons with his parents and their best friends and the daughter he was expected to marry him dried up immediately upon his return to the desert. Moge doesn’t know who he is anymore and he isn’t sure who he wants to be.  But he knows that by staying in, by re-enlisting, he’ll be making a definitive direction about the path of his character, his life.

Remission. Ellen Roddy was diagnosed with cancer and therefore her husband wasn’t deployed. This isn’t the boon that one might think it was. Ellen feels keenly the jealousy and resentment of other wives and because her husband is one of the few men around, he is often borrowed to undertake a multitude of other tasks for other women. She doesn’t see him but she can’t complain because every night he is home and every day he is safe.

“So while all of their friends were getting ready to send their fathers and husbands off to war, the Roddys were going to Darnall Hospital. They started to peel away from the army community; a slight unmooring; their foundation coming loose. There was something unseemly about John being home when all the other husbands were not.”

The guilt that Ellen felt, the emotional toll of having her husband home was almost as great as those whose husbands were away. At least when your husband was away, you had the community support of all the other wives. Ellen had nothing to complain about yet, her life was falling apart. Her daughter was running wild and her husband, beset with his own guilt, was barely with her either physically or emotionally.

Inside the Break. Kailani Rodriguez was the wife of one of the members of Bravo Company and when her husband deployed a new threat went with him, a supply bus with fifteen women (non combat forces who would work at the forward operating base). When Kailani doesn’t hear from Manny like she should have, she broke into his email account and read an email which suggested that Manny’s attentions had been occupied elsewhere. Kailani left her Hawaiian islands for Manny “and his scars” and she doesn’t know if she wants to know the truth, what decisions she should make. “Her husband had just spent a year of his life [in Baghdad], a year she would never know or understand.”

The Last Stand. Specialist Kit Murphy was injured when his Humvee had been hit by an Iranian bomb hidden under the corpse of a dog. He returns home in hopes that he can renew his life with his wife Helena yet her calls to him had become sparse and when she did communicate, she was less lively and interested. Kit could feel her slipping away from him but he didn’t want it to be true. When he was deployed, he would make lists in his head to help him get to sleep. His lists invariably devolved into things he loved about his wife. She became his touchstone and when he returned and she was so distant, Kit felt his world unravel.

Leave. Chief Warrant Officer Nick Cash receives an ominous email from a friend of his who had returned to base. “Stopped by to see Trish. Mark Rodell was there. Just thought you should know.” This email triggers a cascade of events culminating in Nick breaking into his own home during leave to ascertain the consequences he will need to mete out to Trish and possibly this unknown man named Mark Rodell. This short story is as full of suspense as they come. I was scared for Trish and heartbroken for Nick.

You Survived the War, Now Survive the Homecoming. Last Saturday marked the end of the Iraq war. Thousands of troops are returning home. But having lived through the war, these men (and women) have to adjust to life without constant danger and to enduring the mundanities to home. To figure out how to be a father (or mother) to kids who believe the returning troops are strangers. Carla and Ted are trying to navigate the post war life. She with the new infant and he without the dangers and constant responsibilities of war. Their exchanges are short, sometimes profanity laden. Ted doesn’t acknowledge that Carla made sacrifices and Carla doesn’t know the man who’s returned to her. It’s hard to say whether the two will make it.

Gold Star. For anyone familiar with the Army, the Gold Star will have immediate significance. And it will for me as well after reading this story. Josie Schaeffer gets the privilege or ignomy of parking in the Gold Star Family spot. She ordinarily avoids this spot so as to avoid the well intentioned well wishers and the furtive glances of fellow shoppers.

Gold Star, with its imagery of schoolchildren receiving A’s and stickers for a job well-done, was the military euphemism for losing a soldier in combat. Family members received a few special privileges like this lousy parking space, but that menat the pity rising from the asphalt singed hotter than any Texas sun.

Josie is tired of the well wishers and sometimes she wanted to know whether her husband sacrificed his life, consciously made a decision to leave her alone, to save someone else and she resents it. Her grief is palpable and new, a fresh wound open to the elements.

Yes, many of these stories are sad, but I felt better having read them. If those in the military can serve so nobly, the least that I can do is read this book and gain some empathy for the sacrifice, loss and heartache that they all have suffered.  B+