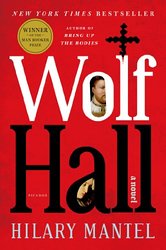 I sometimes feel like I’ve been reading or watching historical fiction based on the reign of Henry VIII since childhood. Probably my first memories of any knowledge of this period in English history were school lessons where I somehow gleaned that Henry had eight wives and cut off all of their heads (I may have briefly confused him with Bluebeard; I *was* young). As a young adult I read up on the era where I could and watched Anne of the Thousand Days (probably one of the more sympathetic portraits of Anne Boleyn I’ve come across, IIRC) and memorized the order of Henry’s wives and their fates (“divorced, beheaded, died in childbirth, divorced, beheaded, outlived him”). Later there were Philippa Gregory novels and The Tudors on cable. The latter is not anything I’d suggest for those looking for historical accuracy, but it did give a good overview of the period and the players; it may have been through that show that I first became really aware of Thomas Cromwell as a historical figure.

Wolf Hall focuses on Thomas Cromwell and tells the story of his meteoric rise from the abused son of a blacksmith to self-made man to right-hand adviser to Henry VIII. Through his eyes we get to see many of the familiar faces of the era: Cardinal Wolsey, Sir Thomas More, Anne Boleyn, the Dukes of Suffolk and Norfolk, Thomas Cranmer, and of course, Henry himself. (It says something about that era that I think of that list 50% of them ended up beheaded.)

The writing style of Wolf Hall is idiosyncratic and thus I found it hard to get into, at first. I’m a bit embarrassed to admit that I am terrible with identifying narrative styles unless they are pretty basic: first person present tense, first person past tense, etc. I just knew I found the style in this novel confusing. So I looked it up: Wolf Hall is written in third person limited present tense. The reader gets Cromwell’s POV only, though it takes a while for that to be totally clear.

What made the style most confusing is that the pronoun “he” is used constantly, but often it wasn’t clear which “he” was being referred to. I had to train myself to realize that when I got lost, it was a safe bet that the “he” in question was Cromwell himself. This sounds frustrating and bewildering, and at first it was, but I did figure it out fairly quickly and once I was in the right mindset, I actually enjoyed the style. (I mean, I wouldn’t want to read it all the time – present tense is more suited to first person in my mind and even then I don’t always like it – but it ended up working for Wolf Hall.)

(There were still times when I had to go back over dialogue because if there was a run of say, 20 lines of dialogue, I could get lost as to who was speaking because there was never any indication – e.g. “Anne said” attached to a line of dialogue. But that didn’t happen that often.)

The thing I found most interesting about Wolf Hall was the portrayal of Cromwell himself. Again, I was most familiar with the representation from The Tudors, and that was not a kind one – that Cromwell was cruel and grasping. A little Googling confirms that history in general does not view Cromwell with favor, but in Wolf Hall he’s a very sympathetic character. Perhaps this is a due to the fact that the story is told from Cromwell’s POV; getting inside a character’s head, even in the third person, tends to make that character more understandable because you’re seeing the world through his eyes.

Even inside his head, Cromwell is a difficult man to really know. His thoughts and emotions tend to be muted, and it’s only through subtle cues, for instance, that the reader feels his grief at the loss, through illness, of his wife and daughters, or his dismay at the long, slow fall of his patron and mentor, Cardinal Woolsey.

As portrayed in the book, Cromwell is not a vengeful man – he lets the many insults about his origins slide off his back, and he gives his antagonist Thomas More many chances to repent and seems to regret More’s eventual execution. (More, in another switch-around, is not given the heroic treatment he’s often afforded in other historical portraits; here, he’s a pedantic and small-minded religious zealot who is smug until almost the bitter end. Though he may be ill-treated by Henry for sincerely held religious convictions, he himself tortured others without mercy when the shoe was on the other foot.)

However, if Cromwell seems less petty and ego-driven than many of the other characters in the novel, there are hints that he has a deep capacity for remembering a slight. The most chilling instance comes when the reader realizes that the young musician in Woolsey’s household whom Cromwell, early in the book, overhears casually insulting him is Mark Smeaton. If you know your Tudor history, you recognize Smeaton as one of the men eventually tortured and executed as a lover of Anne Boleyn. This book ends with More’s execution; I believe the sequel, Bring Up the Bodies, deals with Anne’s fall, but the way Cromwell keeps an eye on Smeaton in Wolf Hall and maneuvers him into a place where he can gain revenge on him is a reminder that while he may be sympathetic (to this reader, at least), Cromwell is not a man to be crossed.

In doing a little research for this review, I discovered that Wolf Hall has been criticized in some quarters for a lack of historical accuracy and for being “anti-Catholic.” On the first charge, it’s hard to know how to feel – Wolf Hall, is after all, fiction, and most of the instances of supposed inaccuracy cited seemed to have to do not with outright manipulation of historical facts but with imbuing Cromwell’s character with thoughts and feelings for which there is no historical basis. But, I mean, again, it’s FICTION. Even actual historical biography often (maybe even usually) has some slant and interpretation to it, so I can’t really ding a work of fiction for having a perspective, even if it’s a non-conventional one. It’s not like the story goes off in a completely unsupported direction, I don’t think, in portraying More as, say, a lecher or a cynic – it just puts his religious severity in a less favorable light than one usually sees.

More tortured people and Cromwell tortured people – I think the historical record is pretty clear on that. There appears to be some evidence (again, simply gleaned from some Googling) that More was enthusiastic about torture, or at least about burning heretics. One could argue that he believed he was doing their eternal souls a favor, but still – somebody who expresses relish over burning a human being to death is not saintly in my mind, and criticism of such a person is fair.

As for Cromwell, I haven’t read the sequel, Bring up the Bodies, yet, never mind the yet-unpublished third book, so it’s possible that his character changes later, and his finer feelings get pushed aside in his ruthless rise to power. But I think Mantel manages to create an interesting and plausible portrait of a man who is complex, pragmatic, sometimes ruthless, and yet ultimately sympathetic.

Regarding the anti-Catholicism charge, I didn’t really see it – the Catholic Church in England at the time is portrayed as corrupt and greedy, but I certainly don’t think that’s an unfair depiction. Protestants are not exactly portrayed as being on the “right” side – Henry’s turn away from the Church of Rome clearly has to do with the Church’s refusal to grant him a divorce and with his desire to get his hands on the Church’s riches in England, riches he seems to believe rightfully belong to the King. I think actual religious conviction is a distant third on the list of reasons for Henry’s break.

Cromwell shows sympathy for dissidents (and gives them aid at times), but he doesn’t seem to be hugely religious either way – like Henry, his reasons for supporting the break with Rome seem more pragmatic than anything else. He does recall an early memory of being a child and witnessing the burning of some Lollards, an event that apparently had an effect on him, but he seems more distressed by the bloodlust he sees on display than anything else. Again, Cromwell’s passions – anger, lust, or any other strong emotion – feel muted in general throughout the book. His driving force is obviously personal ambition, but even that’s made clearer through his actions than his thoughts.

Why do I feel the need to defend Wolf Hall against the criticisms of it? Well, I like the book, for one thing. But it also goes to my beliefs about what leeway I think a historical author should have (as opposed to a biographer, who I do believe has a duty to avoid prejudice as much as possible). This probably wouldn’t be an issue if the novel hadn’t won the prestigious Booker Prize – I mean, I don’t recall people getting that het up about Abraham Lincoln, Vampire Hunter, which I think we’ll agree is probably less historically accurate than Wolf Hall. I think because Wolf Hall is popular and prominent and well-written and researched enough to be seen as scholarly, historians get themselves a bit twisted in knots over artistic license when they really don’t need to be.

If you’re interested in the period and the players and don’t come to the story with a strong prejudice against Thomas Cromwell to start, I think Wolf Hall can be read and enjoyed as the well-written historical fiction about a fascinating man that it is. My grade for it was a high B+.

(BTW, PBS just recently began running a BBC adaption of the book. I haven’t seen it yet, but plan to catch it soon. Damian Lewis plays Henry VIII!)