REVIEW: With You Forever by Chloe Liese 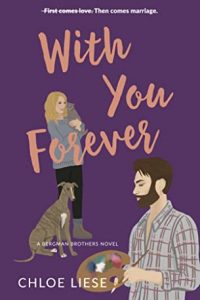 A friend from Twitter recommended your books and this series in particular to me recently. When I saw it at NetGalley and noted “grumpy vs sunshine” it was a foregone conclusion. After reading With You Forever, I know I will definitely be picking up the other books in the series (I have one already) either in ebook or on audio but this book worked just fine as a stand alone. I didn’t feel lost diving into the series at book 4.

Axel Bergman is a 30-year-old neurodivergent artist who lives a very reclusive life in rural Washington State. He has a loud and loving family he adores but he finds it difficult to be social and certain interactions are particularly hard for him to manage. He also often needs some time to articulate his feelings – something that the average person doesn’t give him and, for those people, he comes across as emotionless and/or grumpy. He likes his life the way it is; largely alone, communicating mostly by email with his family and seeing them in small groups or in sparing amounts of time. Love isn’t on his radar. He thinks it’s not for him.

Rooney Sullivan is 24 and studying law at Stanford. She is Willa Bergman’s BFF (Willa is married to Ryder – their book is called Only When It’s Us) and as such has been around the Bergman family many times, to the point where she’s been virtually adopted by them. She has a crush on Axel but because he leaves the room almost immediately she arrives in it, she thinks he’s not into her. At a recent Bergman family get together, there was a game of charades and the clue was “kiss” and bing bang boom, suddenly she was kissing Axel because the rest of the family just were not getting it and Rooney is competitive. That’s what she told herself anyway. The kiss was amazing but then Rooney had an attack of pain from her chronic illness of ulcerative colitis and needed the bathroom so had to run and when she returned, Axel had gone. Seeing him again will be difficult.

When Rooney’s health worsens, she decides to take a leave of absence from Stanford and get herself settled on her new medication and decide what she wants to do from there. While Willa does not know the reason for it, she does know that Rooney is in need of a place to stay to rest and recuperate. She offers the A-frame house that is owned by the Bergman parents and used by the various family members over the course of the year. Assured that nobody else is using the house, Rooney accepts the offer.

Axel normally lives in a small cabin a short distance from the house but he’s at the A-frame when Rooney arrives because he’s planning major repairs. Unfortunately those repairs mean that Rooney cannot stay at the house (it is unsafe) and, worse, they are so extensive, Axel is unable to fund them without dipping into an inheritance which has a catch – he has to be married to take the money. Axel has reasons for keeping the repairs a secret from his family so the inheritance is his only immediate option given his recent difficulty (Rooney-related as it happens) painting.

It was a bit of a leap for me to accept this marriage of convenience I admit. It’s the least believable part of the book – but I’ve gone with stranger things and I was prepared to give it a pass as I was already invested in both characters and their clearly mutual attraction. Forced proximity is another favourite trope and if a marriage of convenience is how the pair is to be forced together, well bring it.

Told in dual first person point of view, the sections from Axel were different enough to those from Rooney that it was easy to orient myself without constant reminders of whose perspective I was in. Rooney has a breezy, funny kind of tone to her narrative which I enjoyed.

Notwithstanding the very real and serious difficulties she faces, Rooney is generally upbeat and social, generous with her time and her smiles, more likely to laugh than not. Axel is… not. He feels like he doesn’t belong and finds it easier to be alone.

It’s clear that Viggo, another Bergman brother, is the most emotionally mature one (he reads romance novels so of course he is) and he is the go-to Bergman for advice of a personal nature. He’s a bit pushy – sometimes this is what is needed in this family – but the genuine love is also obvious. There is a delightful mix between acceptance of Axel for who he is (not just by Viggo – by all of the Bergmans actually) and encouraging him to be brave in going after what will make him happy, with a dash of longing and acknowledgement that certain things from Axel have a higher value – like here:

Viggo gasps and throws me a wounded glance.

“It was extenuating circumstances,” I state for the record, scooping out flour.

“What do I have to do to earn a hug?” Viggo demands.

“If you ever fly a thousand miles and arrive on my doorstep in tears, I’ll hug you, Viggo.”

It was difficult for Axel to share his diagnosis with his family and to be vulnerable enough with them – who all love him dearly – so he thinks it’s never going to happen with someone else. However, over their time at the cabin, he finds Rooney pays attention and patiently listens.

Like so many vital moments with Axel, his love is loudest when he’s quiet.

She takes note of what he likes, asks in respectful ways about what makes him happy and also, challenges him just a little. (For example, Axel has a “not my dog” dog when Rooney arrives. Rooney is not having that.) Axel didn’t think love was for him but Rooney sees him and loves him as he is. For his part, Axel feels the same way about Rooney. Ultimately, I think that “being seen” thing is one of the things which draws me to the romance genre and I love it when characters who feel they don’t belong find their emotional home.

The conflict is basically that Axel fears he will not be able to make Rooney happy. He needs quiet and is not social. Rooney is extroverted and gregarious. How can he be enough for her?

I did like that both characters were emotionally brave – even though there was still a point where their bravery stumbled a little. I liked the way they interacted, their acceptance of one another and their delight with one another. That perhaps makes the story sound heavier than it is. There are heavy topics sure, but the story itself is lighter than that, with many funny moments and plenty of steam as well as quiet intimacy which got me a bit melty at times.

It was also important to me that the autism representation in the book is own voices. I don’t make the mistake of thinking that any one experience is universal but it gives me a level of comfort when an author has authentic experience to draw from when it comes to neurodivergence. From the Author’s Note in the back of the book, I know also that you drew heavily on the experience of a close friend when it comes to the representation of IBD/ulcerative colitis from which Rooney suffers and your own experience of being gluten intolerant. Again, it helped me to feel comfortable that the representation would be sensitive and trustworthy.

There were a couple of things I didn’t quite understand. Because they occur near the end of the book I’ll put them under a spoiler tag.

It was a bit unbelievable to me that the family would not notice the extensive renovations Axel had done. Also, by the end of the story, the family did not know (so far as I could tell) that Rooney and Axel were actually married. I wondered how that conversation would go.

Those small issues aside, With You Forever was charming, funny, sexy and sweet, with engaging characters who made it easy to care about them.