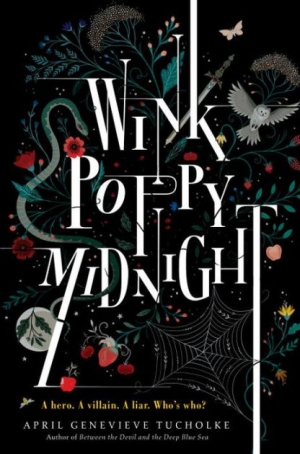 Wink Poppy Midnight tells the story of three people: Wink, Poppy, and Midnight. Poppy is the blonde queen bee of school. Wink is the freckled outcast who’s dreamy and a little off-kilter. Midnight is the boy caught in between. The book rotates between their three POVs and wow, was the cover description not kidding when it said the book does so with sharp precision. I will say that not everyone will like this style of sharp, short chapters. I personally thought the narrative structure was very effective and the correct choice for this book.

This is a difficult book to talk about without spoilers. It delves deep into the three characters and the archetypes they portray. Sure, Poppy is the mean girl but she’s more than that. This is a book that allows the mean girl to be, without necessarily redeeming her or explaining why she’s like that. Poppy’s definitely a prickly and hard girl, but that’s why I like her. We don’t see enough female characters like her in fiction, especially in YA fiction, and if she is present, she’s often relegated to the role of villain.

On the other hand, we have Wink. Wink is innocent and naïve, right? She doesn’t stand a chance against Poppy, right? Maybe. Maybe not. Wink is an equally interesting character because she’s the perfect example of belief becoming reality and how we can construct our own personal narratives until they become truth. There’s a self-awareness to Wink. She knows what she’s doing. She knows that she’s casting people into these archetypal roles and seeing if they’ll live up to her expectations.

This is a very quick read. There are twists and turns as we try to figure out who’s good and who’s bad and who might be somewhere in between. It might not be the story readers expect it to be in the end, but I think it’s still ultimately a satisfying one. B+