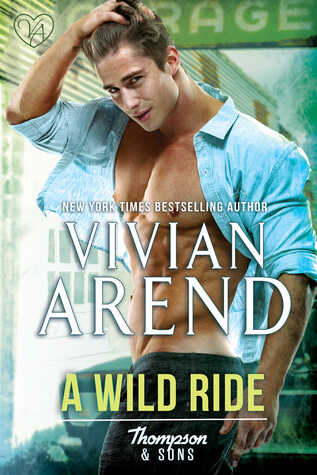 I made grabby hands when I heard this one was up on NetGalley. I love your Coleman books and the Thompson & Sons spin-off series, set in Rocky Mountain House, Canada.

Troy Thompson is the second youngest of five children. When their mother died, Troy was 14. The entire family was (of course) devastated. Troy’s dad sank into a bottle, and his siblings imploded in one way or another. They don’t realise it, but Troy did a lot of things behind the scenes to help them all get through. Unfortunately, this has given him a reputation, in his family and in the town, of being a good time boy and not the settling kind. (The link between those things is explained in the book.)

Nic and Troy have been hooking up (on the sly because of the BFF rule) for a few months. They have scorching hot sex and get along well but it’s just casual. However, when Nicole announces that their fling is over, that she needs to concentrate on being a grown up and having a “real” relationship so that she can get married and start a family, it causes Troy to rethink things.

Nicole’s sisters are happily married with children and there is another baby on the way. Nicole wants her (yet-to-be-conceived) children to grow up close in age with their cousins. She’s suddenly realised she’d better get cracking. Her hormones are not entirely on board with this plan but she is determined.

Troy finds he doesn’t like watching Nic dating boring losers. He can tell she’s miserable. She’s a firecracker – why is she buttoning herself up so tight? He’s not ready for their fling to end and from the way Nic’s body continues to respond instantly to him, neither is she.

“Intellectually exciting. Really. Is that how he’s going to get you off later? Reading you his latest financial reports?”

The big brute stood close enough that heat traveled between them, their hips brushing. Every inch of her completely aware of every inch of him surrounding her.

“I’m very interested in solid financial numbers,” she said as primly as possible.

“I’ll give you a solid number,” he offered as their hips bumped again. “Nine solid inches.”

Good grief. Heat rushed through her, the challenge too much to resist. Nicole turned on the spot, falling into his eyes for a moment before remembering she needed to stay focused. “You don’t want to get into a dick war with me,” she whispered. “I have a whole drawer full of dicks, and they’re all bigger than yours.”

He opened his mouth again, but whatever he was about to say stuttered to a stop as she lowered a hand and deliberately pressed it over the front of his jeans.

Troy swallowed hard, hips rocking into her as if he had no control over the impulse.

A shiver rippled over her entire body. Nine inches was a low estimate. She knew from personal, intimate detail he was a handful and a half.

But it’s not only boring losers Troy doesn’t like Nic dating. In fact, he doesn’t like watching Nic dating anyone. No-one is good enough for Nicole. No-one but him, that is. Can he convince her to give them a try? So used to hiding himself and prioritising others, can he show Nic the hidden Troy? Can he prove to her that he’s a good candidate for a serious relationship? And, if he can convince Nic, what about her family and the rest of Rocky Mountain House?

When the book begins, Troy and Nic are already friends and lovers – but as compatible as they are sexually, their relationship has only been casual, with the the thrill of secrecy adding extra combustion.

Troy realises that in some ways, the casual nature of his fling with Nicole mirrors his relationships with everyone in his life. He loves his family dearly – and they love him. But for the most part, they don’t seem to notice him. He’s not after getting kudos and acclaim for the things he’s quietly done for his family, but at the same time, it would be nice if they looked at him every once in a while and saw him. His discomfort with not being known, not truly, not by anyone, combines with his attraction to Nic and, over the course of the story, he lets her in. To her credit, Nicole does see him. And, having seen him, she realises the treasure she has in her arms and plans not to let him go – no matter how stupid her family might be about it.

There is a lovely section in the book where Nicole talks to Troy’s sister, Katy, about what “colour” each of the Thompson siblings are. And also a little later, when Nicole decides exactly what colour Troy is and why.

I’ve read almost all of the Coleman and Thompson books (there are a couple still waiting on the TBR) and I enjoy the families and their interactions with each other. I didn’t find the other Thompson family members intrusive – they appeared in the story but in ways that felt organic. I think the novels work just fine on their own but there is some added enjoyment  for series readers, who have a better understanding of the history and personalities involved.

I liked Nic and Troy together – they proved to themselves (and to this reader) that they had what it takes to make it for the long haul. Nicole’s superpower is her ability to see/interest in seeing Troy and the things he usually hides (and continues to hide with everyone else) – apart from liking her and being completely attracted to Nic, this is a powerful draw for him.  But it is also a precious gift that Troy has given her – he has shared none of this with anyone else and Nic realises how important is that level of trust. On the other side of the equation Troy shows Nic that they can do serious and long term without foregoing fun and spontaneous as well.

I would have liked a little more clarity in how Nicole’s family eventually came around – one of them in particular needed to do some major grovelling IMO. There was also a transition late in the book which felt so sudden that I wondered if I’d accidentally skipped some pages. It mostly made sense in the end, but it jarred a little until I got to the explanation.

However, for a feel good romance, A Wild Ride gets two thumbs up from me. It was sexy and romantic, funny and sweet. I ended the book with a big smile on my face and the happy book sigh.