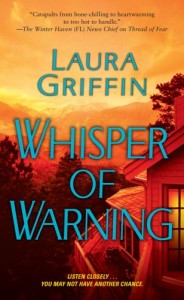 After finishing the first book in this series, “Thread of Fear,” I was looking forward to reading the story of that heroine’s (Fiona) sister, Courtney Glass. I’ll be honest and admit I’m more of a Fiona in real life – I do everything I should, worry about not going too far over the speed limit, obsessively go over my tax return in fear of the IRS, and wear sensible shoes. Sigh, I sound boring. But secretly I sometimes want to be a Courtney – with red color highlights, who fearlessly struts down the street in 4 inch, strappy shoes and thrives on making an entrance. What I don’t want, however, is the people who want her dead.

Courtney Glass is the younger sister. She’s the one her older sister Fiona mothered when their own mother got lost in bottles of booze and made bad choices in men. Courtney acted out in her youth and still does stuff even now that frustrates Fiona. The latest screw-up was dating a man who turned out to be a) married and b) an asshole. Courtney trashes his car after sneaking through his BlackBerry and discovering the truth about him – something that Fiona’s friends on the Austin Police Department cover up as a favor.

But this little favor will come back to bite homicide detective Nathan Deveraux in the ass when he and his new partner, Will Hodges, respond to a murder call and discover that Courtney is involved in it. Nathan knows she’s not capable of murdering her ex-lover but isn’t so sure he can convince Will of that.

Turns out Will’s instincts tell him that, despite all the lies Courtney is feeding him about what happened in her car and is going on in her life, she didn’t do it. He knows she knows more than she’s telling him and he wishes she’d stop doing things that sabotage her own defense but, yeah, he’s convinced she didn’t kill John David Alvin. Now he’s just got to deflect his own superior who’s this close to arresting Courtney and find out who committed the murder before the murderer finds Courtney again.

As with “Thread of Fear,” the police stuff is great. No donut jokes – despite the use of a donut shop for a couple of scenes – and I liked that Will and Nathan pick up a few more cases during the course of the book which sounds far more reasonable than two detectives devoting all their time to just one case. Nathan’s silent commentary on cop physique + diet seems spot on. The time where he and Will examine the house of a missing person was a cool example of how detectives visually process a crime scene, knowing what to look for and noticing what’s missing in the house.

Courtney is, as her sister tells Will, a difficult person to care about. She’s made dumb moves in the past but I think her reasons to keep things from Will makes sense given her past run ins with the law coupled with how difficult she thinks it would be to get the cops to believe what really happened during the murder. Plus she knows that Will and Nathan’s lieutenant is just itching to arrest her in order to close the case and get the powerful family of David’s wife off the department’s collective back.

I did wonder why Fiona’s ex-cop husband Jack didn’t get involved in the case. Surely he could have helped Courtney some. But my curiosity was tempered by the addition of Alex Lovell, the PI who helps Courtney when she decides running is her only option. Alex’s scenes with Nathan lead me to hope for something in the future.

Courtney’s decision to go underground is probably one that might annoy some readers. After all, she’s got a detective who believes in her
and isn’t it safer to go into police protective custody? Only you’ve shown us throughout the book that the police are stretched thin, that big money is behind the murder and that Courtney’s past is working against her with police officers who are only human and prone to believing that a person’s past record is an indicator of present behavior.

I did wonder at the dropped hint about Fiona and Courtney’s stepfather and his possible actions towards Courtney. This would explain a lot of her behavior in the past but has she come to terms with anything that perhaps occurred? She does say that she’s hoped for a marriage and family so she’s not turned into a Romance Land heroine who thinks she’s totally unworthy of love but if what I think happened, happened, she might still have some issues to work through.

The sexual tension between Will and Courtney is nicely built up throughout the course of the story. I’m glad that Will is aware that what he’s feeling is a major problem given the fact that he’s investigating Courtney. And this fact is also a realistic reason for interrupting any hot scenes early in the story. Usually coitus romanticus interruptus drives me nuts since it feels so fake but here we’ve got a concrete basis for Will to stop. And when he does realize his feelings have gone too far, he does what a police officer should do.

The book is scattered with funny Venus/Mars moments. Will admires Courtney’s fantastic legs in her stiletto heels but is puzzled when she admits they’re murder on her feet. “Why do you wear them?” [he asks] At which point any woman would be rolling her eyes. Will is flabbergasted that Courtney needs to go with Fiona when she tries on her wedding dress. And WTF are “dressy jeans?” But one of the funniest was their conversation about Fiona’s wedding look.

The ultimate force behind the initial murder didn’t have me rolling my eyes when All Is Revealed. The reason for the crime makes sense given the payout and also follows one of the basic tenants of criminal investigation. One question? Was the particular DVD found in intro mode supposed to be a tiny clue? One of the reasons I find romantic suspense problematic is the unbalance between the two themes but as with “Thread of Fear,” the two are even here. I also like that there isn’t a surfeit of gore just for gore’s sake.

There wasn’t a preview of your next book at the end of this one which leads me to wonder what you’ll write next. Something different or – pretty please – a story for Nathan? What I do know is that you are becoming a go-to author for me when I’m in the mood for a rom-susp book. B+