REVIEW: Where We Belong by Emily Giffin

Decades ago, when I was a teen, I read a wonderful book by Lois Lowry called Find a Stranger, Say Goodbye. The book chronicled the teenaged Natalie’s search for her birth mother, her meeting with the woman who gave birth to her and gave her up for adoption, and ended with Natalie’s realization that she belonged with the family she’d always had. 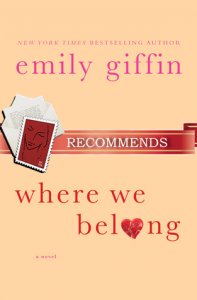 I was reminded of Lowry’s book when reading your sixth novel, Where We Belong. Prior to this I had read four of your books, and enjoyed three of them, most especially Something Blue, the sequel to Something Borrowed. I was disappointed in Baby Proof, though, enough that I feel a little trepidation whenever I approach a new book of yours. Happily, Where We Belong proved enjoyable and thought-provoking.

Like Lowry’s book, Where We Belong deals with adoption, but it is written from a different perspective. Whereas in Find a Stranger, Say Goodbye Natalie meets with her birth mother late in the story, here, in Where We Belong, adoptee and birth mother meet by the end of Chapter One. The rest of the book is about what happens after that.

Where We Belong has two heroines: Marian Caldwell, a successful television producer who gave up a child for adoption when she was eighteen, and Kirby Rose, the girl Marian gave away, now eighteen herself.

The book alternates between the two characters’ first person present tense POVs and begins with Marian angling for a proposal from her boyfriend of two years, Peter. But Peter, recently divorced, is commitment-shy. The two of them have a fight and Marian takes a cab to her Manhattan penthouse. It is there, at eleven o’clock at night, that Kirby arrives at Marian’s door.

Kirby’s appearance on Marian’s doorstep is unexpected. Marian hasn’t met Kirby since she gave her away, and though she left her contact information with the adoption agency, she has never told anyone but her mother about her pregnancy. That she kept it secret from Peter, from her own father, and from Kirby’s biological father makes it hard for her to cope with Kirby’s reappearance in her life.

Kirby is a disaffected teen, envious of the attention her sister (her parents’ biological child, born after they adopted Kirby) gets. She wonders who her biological parents were, and after overhearing her parents worrying about what kind of people may have conceived her, she takes a bus from St. Louis to New York without telling them, and looks Marian up.

Because Marian concealed her pregnancy, she’s not eager to discuss it, or the biological father’s identity, with Kirby. She’s compartmentalized the pain of her loss, and she tries to compartmentalize Kirby as well, by taking her shopping at Barney’s and to see the Met instead of being truthful with her.

Of course, Kirby senses this and it amplifies her feelings of alienation. For all Marian’s success and sophistication, and Kirby’s aimlessness and disinterest in attending college, in some ways Kirby has more on the ball than her biological mother.

So neither character is immediately sympathetic, but they both become more so as they grow over the course of the novel, which goes in all sorts of interesting directions from there. We see how Marian’s secret-keeping has affected her relationship with Peter, who is the CEO of the network where she works as well as her boyfriend, her interactions with both her mother and her father, as well as her friends, and how the emergence of the truth impacts all these relationships.

We also see Kirby mature through the process of learning where she came from, realizing finally how much her family means to her and that in the end, no one knows her better or loves her more than the parents who raised her and saw her through the journey from baby to young adult.

There is an interesting contrast between the teenage Kirby and the teenage Marian, shown through flashbacks. While Marian had a better sense of direction than Kirby as a teen, she was less willing to express her individuality and more eager to please other people, especially her parents – which did not serve her well when she got pregnant by a boy who wasn’t what her parents wanted for her.

Meanwhile, Kirby doesn’t know what she wants to do with her future, but she finds it easier to be who she is, even when she doubts if anyone else appreciates the person she is. Learning the identity of her biological parents ultimately helps Kirby gain confidence, but it doesn’t change the honesty and authenticity she has from the beginning.

Kirby and the younger Marian are also contrasted with the older, goal-oriented Marian, a woman who seemingly has everything but isn’t really happy, partly because she’s concealing a huge secret and partly because she has never acknowledged to herself how much she lost as a teen. Ultimately, this is a book about the importance of being truthful, both with others as well as with oneself. It’s also about being true to oneself, acknowledging one’s needs and desires even when they don’t fit the template of the life one has built.

Where We Belong is a deeply absorbing novel and even has some romantic moments, as well as others that made me reach for a box of tissues. The emotional center of the books is Marian and her journey, rather than Kirby’s. Much as I liked Kirby, her story felt more like a subplot to me. It was Marian who had lied to so many of her loved ones and had to unravel the tangle she had created.

Though I enjoyed the book, there are a couple of issues I want to mention. The main one is that because Marian’s healing process is at the book’s center, the book is constructed in such a way that we see Marian frequently portrayed through Kirby’s POV, as well as through her own. This is problematic, since the result is that Kirby focuses on her biological parents (Marian especially) more than on her real parents and her sister.

Because of that, Kirby’s parents, while portrayed as good parents, are never fully fleshed out as characters. We know that they worry about Kirby, we know that Kirby’s dad talks too much when he is nervous and we know that Kirby’s mother feels threatened by Marian. All of this is understandable, given that Marian is a successful television producer and their daughter’s biological mother, but since the novel doesn’t take the time to flesh out Kirby’s parents, Kirby’s realization that the family who has known her all her life is the one where she belongs doesn’t have as much power as it might have otherwise. Kirby’s parents are a footnote in what is essentially Marian’s story, since even Marian’s parents get more face time.

Another, more minor issue is that although I never looked at this book as taking an anti-choice stance, I think it’s possible other readers might see it in that light. More than one character indicates Marian made a better choice when she decided against abortion. In every case, saying this fit the character but I mention this anyhow since I know it’s a hot button issue for many readers.

But even with these problems, Where We Belong is a moving book, and one that sucked me in deep. I especially liked how two such seemingly unpromising characters as Marian and Kirby both turned out to be women I could like, root for, and believe in. I loved the ways they both grew in their separate paths as a result of their meetings, I loved the way Marian began to live her life with greater honesty and authenticity, and Kirby realized how much she had to offer the world. This was a rewarding novel.

From Macmillan (Where We Belong Audio Clip):