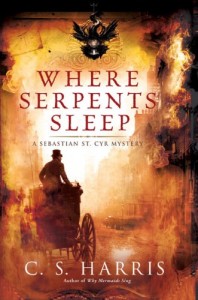 I have been a fan of yours since reading your first book, Night in Eden, written under the name Candice Proctor. Though the other romances written under the Proctor name never quite equaled that first book, I have continued to enjoy your writing both under that name as well the name you use for your Sebastian St. Cyr mysteries, C.S. Harris.

Where Serpents Sleep is the fourth title in the series that began with What Angels Fear, and continued with When Gods Die and last year’s Why Mermaids Sing. Each book contains a central mystery that is resolved in the course of the book, but there are also overarching mysteries and storylines that continue from book to book. I liked the debut a lot, grading it a B+. I noted at the time in my book log that the mystery did not interest me terribly (I’m not much of a mystery fan in general), but that the writing was good and Sebastian was an interesting character. The second book worked a bit less well for me; without the newness of the central character to appreciate, the book felt thin and the mystery uninvolving. Still, I gave it a B, being that it was well-written and entertaining enough.

Why Mermaids Sing was actually my favorite of the series, earning an A- from me. The higher grade was due to some interesting developments in Sebastian’s personal life, and, I’m a little bit embarrassed to admit, the rather lurid mystery that formed the heart of the book. Not that the mystery was sleazy or titillating; rather it had a certain grisly fascination (and I’m not usually a fan of grisliness). So I was very much looking forward to Where Serpents Sleep.

The book opens not with Sebastian but with Hero Jarvis, the daughter of Sebastian’s nemesis Lord Jarvis; Hero has appeared in (and sparred with Sebastian in) previous books. She is a thorough bluestocking, a sensible 25-year-old spinster who has an interest social welfare. To that end, the opening finds her at Magdalene House, a refuge for runaway prostitutes run by Quakers. Hero is interviewing the denizens in support of a bill that’s to go before Parliament; she is researching the lives of these women to try to prove that they turn to prostitution not out of innate low morals but due to desperate circumstances. Hero is speaking to a prostitute named Rose Jones when a commotion erupts downstairs. Rose seems to know immediately that the intruders have come for her, and her fear and urgency convince Hero that the situation is dire. They escape by climbing out a window and jumping to the ground, but as they flee, Rose is shot and killed.

Hero turns to Sebastian for help in discovering who was after Rose and why. The trespassers at Magdalene House killed eight women, including Rose, and covered their crime with a fire. The public at large does not know that a crime has been committed, and if they did, many would likely not care, due to the social standing of the victims.

Sebastian St. Cyr, Viscount Devlin has being having a rough time of it lately; events depicted in the last book have left him emotionally devastated, estranged from his father and torn from the love of his life, actress Kat Boleyn. Kat has since gone on to marry another man, and Sebastian has retreated from the world, drowning his sorrow in alcohol and generally wasting his life. He decides to help Hero mainly to aggravate her father, a fact that Hero uses to garner his cooperation.

Rose Jones, as it turns out, was not a typical prostitute, brought up in the slums and introduced to “the game” at a young age. She turns out to have been a born and bred member of the aristocracy; her real name was Rachel Fairchild. She had made her debut the year before and been engaged to be married when she supposedly abruptly retired to the country with an unidentified illness. In fact, she ran away and ended up in a brothel.

There are two mysteries in Where Serpents Sleep: why Rachel fled the safety and security of her privileged life for one of degradation and danger, and why someone killed her.

Honestly, neither mystery engaged my attention fully – the resolution to the first felt a bit obvious, and the second rather obscure and arbitrary, though I inadvertently partially spoiled myself for it by reading the author’s note at the end; maybe I would have found it more interesting had I not. But as I mentioned above, I’m not much of a mystery reader, and I don’t really read this series for the mysteries, anyway. I am interested in the characters and their relationships, the fine writing, and the way that Regency England is depicted. I’ve read so many regency romances over the years; it’s strange that some of the most vibrant descriptions of the era I read these days seem to be outside the genre. Maybe the various romance tropes get in the way of my getting that sense of realism that I crave. I think it helps that in these books Sebastian ends up interacting with people at many different levels of society – so you get a feel for the lower and middle class folks of the time as well as the aristocracy.

To get back to the relationships for a moment – one of the strengths of this book and indeed of the series so far is the complexity of the relationships between the characters. As I mentioned, Sebastian is estranged from his father, but even when they were on speaking terms, they had a rather tension-fraught relationship. His father is definitely flawed, but he’s no cardboard villain. Even Lord Jarvis, who rather decidedly is a villain (though not of the cardboard variety) shows some humanity in his concern for Hero.

It appears that we may be headed into a love triangle between Sebastian, Kat and Hero. I have mixed feelings about that. I find both of these women appealing and "right" for Sebastian, each in her own way. Kat is the more unusual heroine, at least from the traditional romance standpoint. But she has a lot of baggage, even if she and Sebastian were to resolve the issue keeping them apart at the moment. Hero fits into the no-nonsense, bluestocking spinster mold rather well, but at the same time enough depth is given to her characterization to make her feel like more than just a type, and in some ways I think she’s good for Sebastian. I must confess, after four books I feel a bit protective of him! He deserves to be happy. But I wouldn’t mind it taking him a few more books to get there.

Aside from being less than enthralled with the mysteries, I have few complaints about Where Serpents Sleep. One thing I noticed (and I seem to recall being the case in previous books in the series): the chapters are very short, often only about four or five pages long. I have mixed feelings about that – on the one hand, it seems to contribute to the book’s feel of being a quick and easy read that moves along briskly. On the other hand, it also lends a slightly insubstantial feel to the story, and I wonder if the book could have been a little longer. With fewer chapter breaks and thus less white space, I wonder if the book would have clocked in at closer to 300 pages rather than the 341 it ended up at. But that’s a minor quibble, and partly influenced by my preference for long, meaty books (actually, I used to really like big, thick tomes even more than I do now; these days I just basically wish every good book were longer and every bad book were shorter).

I’m giving Where Serpents Sleep a high B+, and look very much forward to the next installment in the series.