REVIEW: What Remains of Heaven by C.S. Harris 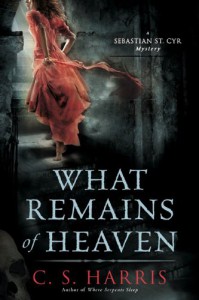 I have been anticipating the release of What Remains of Heaven, the fifth book in your Sebastian St. Cyr mystery series, for several months. I’ve come to expect a new book in this series every year, and while I’ve liked some of the offerings more than others, each has been satisfying (with grades ranging from A- to B), and the continuing turmoil in Sebastian’s personal life has held my attention from book to book.

Just a quick note: I think it’s probably going to be hard to entirely avoid spoilers for earlier books in the series in this review, so if you haven’t read the series, intend to, and are fanatical about remaining spoiler-free, you might want to stop reading now.

Sebastian St. Cyr, Viscount Devlin, has rather inadvertently and reluctantly become known as a murder investigator (don’t you hate when that happens?). His imperious aunt comes to him accompanied by her friend, the ailing (but still formidable) Archbishop of Canterbury, to request Sebastian’s assistance in finding out who killed the Bishop of London, Francis Prescott. Bishop Prescott had been summoned to the village of Tanfield Hill one night upon the discovery, in a recently opened crypt, of a body that did not belong there – a long-deceased man found not in a coffin but on the floor of the crypt, with a knife sticking out his back. The Reverend Earnshaw, who had ridden to Lond to inform the bishop of the grisly discovery, is late in meeting him at the crypt and discovers Prescott practically atop the first body, with his skull bashed in.

Sebastian has no particular personal interest in this crime (unlike some of the previous ones he’s investigated), but agrees to look into it because of his regard for his aunt. Bishop Prescott, as it turns out, had any number of enemies (don’t they always?). He had angered many with his abolitionist stance, and the fact that he was being considered for the powerful position of Archbishop of Canterbury may have made some who opposed his views on slavery nervous. One of this group, a foppish aristocrat named Lord Quillian, was overheard threatening the bishop shortly before his death. Additionally, Prescott was see arguing with a butcher the day he was killed (it turns out the butcher’s son has an unpleasant past association with Sebastian, which ends up complicating his investigation), he had had a run-in with William Franklin (a real historical figure and son of Benjamin Franklin, William had been exiled to England for his support of the British during the American Revolution) and there was apparently acrimony between the bishop and his nephew Peter Prescott, an old school chum of Sebastian’s. Things get even murkier with the introduction of a subplot about a mysterious spy who had operated against the British during the revolution 30 years earlier; this thread ends up involving both Prescott’s family and Sebastian’s own (this is another one of those series that makes me wonder if there were only a couple of dozen people living in London in the 19th century, since the same people turn up over and over again).

As with previous books in the series, the mystery didn’t engross me hugely. At times it felt like there were lots of potential red herrings and improbably coincidences thrown at the reader, but those may be par for the course in mysteries, for all I know; I haven’t been a regular reader of the genre since I was a teenager. When I read mysteries these days, I tend to filter out the very same information that mystery fans are probably filing away to see if they can figure out the solution to the crime. I really don’t care about solving the crime myself, and untangling the clues makes my head hurt, so it’s hard for me to assess the worth of this book as a straight mystery, except to say that I was impressed by how neatly all of the pieces fit together in the end. That’s really all I ask of a mystery; other readers may have more stringent requirements. (I guessed one fairly obvious “surprise” early on, but the the ultimate identity of the killer did surprise me.)

Again, as with previous books in the series, my real interest is the setting and the continuing characters. Sebastian remains an intriguing and highly sympathetic hero, one who has been buffeted by a number of distressing revelations over the course of the series. This book is no exception, and while these revelations are fairly melodramatic, even soap-operaish in nature, there was an internal logic to the ways in which the characters were manipulated, I thought.

As in past books, Sebastian’s romantic travails are featured in What Remains of Heaven, but I was a little disappointed that the characters seemed to pretty much tread water for the course of the book. Sebastian’s relationship with Hero Jarvis is complicated by the consequences of their night together in the last book, but while they meet up a number of times in What Remains of Heaven, their conversations have a repetitious quality that frustrated me. (Hero has her own reasons for wanting to get to the bottom of the bishop’s murder; he was a friend of hers and was helping her with a personal problem.) Sebastian’s relationship with Kat Boleyn is rocked by an entirely unshocking shocking revelation, but there are still considerable obstacles between this couple and their HEA (and honestly, I’m more on Team Hero at this point). I would have preferred a bit more balance between the mystery and Sebastian’s relationship drama. I don’t mind the series being drawn out, and I realize that this dictates that things go slowly on the personal front, but I do want to see some progress in the course of a book.

Sebastian’s relationship with his father continues to intrigue; the two have been very up and down in the course of the series, owing to the fact that Hendon was hard on Sebastian as a boy and continues to lie to him about Very Important Things now that Sebastian’s an adult, things that Sebastian has a way of finding out, leading to a fresh round of recriminations and then estrangement. I can’t help but like Hendon in spite of his flaws because he really is a fully drawn character; he loves his son but he can’t seem to stop making mistakes with him. He has functioned at times as an antagonist in the series, but he’s anything but one-note (unlike, say, Sebastian’s sister, whose personality seems to be permanently set on Witch).

The prose is mostly smooth, marred here and there by a lack of subtlety and a tendency to over-explain (Hero at one point thinks that it’s tedious that as an unmarried female the rules of society dictate that she can’t visit a man she wants to question in the murder case; I would think the vast majority of readers would understand enough about the mores of regency society that they would not need to have these circumstances pointed out to them so explicitly). My enthusiasm for the series really does rest mainly with the characters; Sebastian, Hero, Hendon, Kat and a few others are sympathetic enough to make me care about them and faceted enough to keep me interested from book to book.

My grade for What Remains of Heaven is a B+.

→ Jennie
Previous article: REVIEW: The Husband She Couldn’t Forget by Carmen Green
Next Post: Will the length of a story affect how much you are willing topay?