I’m back. Remember me? I read Vampire Instinct a few weeks ago and while it was a nice read, it was just that. Nice. I like you when you’re crisp and edgy and take me to dark, weird places. So I picked up Vampire Mistress and Vampire Trinity and decided to give them a go. They both came out last year, but as soon as I found out that Vampire Mistress was the first of a two parter, I waited for the second one to come out. Reading Vampire Instinct reminded me to pick up the books, and I’m glad I did. 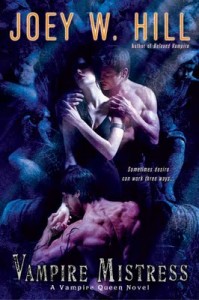 These books read like one big story in two smaller volumes, with one notable exception (which I will go into later).  I’m glad that I waited to read the second half because I was concerned that the stories would not stand alone, and I feel somewhat justified in that perception. I don’t think you should read one book without reading the other, or the experience will feel unsatisfying. Moreover, I was worried that you’d taken one novel and shoved it into two books, but this was not the case.  I did not feel like this suffered from story-bloat. Many times authors will try to draw out a shorter story with extended sex scenes or big misunderstandings to fill page count (or so it feels like from the reading perspective) but I am pleased that this was not so.

As a quick recap to Vampire Mistress, the story starts out with Gideon seeking peace of some kind. He approaches a Mistress in a BDSM club and finds Anwyn, who takes a liking to him and begins to show him how he has a submissive and protective streak under that angry, furious exterior. Anwyn has a vampire lover, Daegan Rei, but she will not be his servant, and he will not take anyone to his side but Anwyn. This little mess of a relationship gets worse when Anwyn is raped and brutalized in an alley by other vampires seeking vengeance on Daegan. To anchor herself, she must take Gideon as her human servant. Vampire Trinity spreads the story out to encompass the struggle that Anwyn has to fit in with the vampire community, Daegan learns who has betrayed him, and Gideon learns that he desires not just Anwyn but Daegan, too. The relationship focus is pretty focused on Gideon/Anwyn in the first book and then spreads to involve Daegan quite a bit more in the second.

I approached these books thinking they would be primarily focused on Anwyn, a newly-made vampire (and the titular vampire mistress). To my surprise – and delight – I felt as if Gideon Green was the focus of not one, but both books, and it is his journey that these stories encompass. If you read the first Vampire Queen books, you will recognize Gideon as the very emotionally damaged brother to Jacob, the Queen’s mate/servant. Gideon is a vampire hunter who lives to destroy those that go bump in the night. He is a man destroyed on the inside and lives nothing for vengeance. Yet it is Gideon that must be Anwyn’s anchor when she is turned against her will and made into a vampire that suffers from seizures and schizophrenic voices. It is Gideon that struggles with a strange attraction and partnership with Daegan, the loner vampire assassin. It is Gideon that must be the cement that keeps their fragile trinity together, and he must strip away his mental barriers to do so.

This is not a love triangle in the traditional sense – the men are not fighting over the woman. Rather, they all bring something different to the relationship, and it cannot function without all three parts. Daegan has never taken a servant before, and is fascinated by Gideon’s servitude to Anwyn, the woman Daegan loves. Gideon struggles with his devotion for Anwyn, a vampire, and Daegan, a man, and wants to serve them both. Anwyn must dominate Gideon as a vampire to make him truly happy, and at the same time, craves the fact that she cannot dominate Daegan. I don’t explain it as well as it’s done in the books, but you do truly feel as if all three parts make up the whole, rather than this being a pairing with a convenient third wheel. 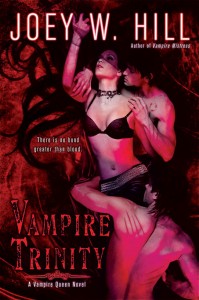 I also need to give props to the relationship between Daegan and Gideon. I initially felt this would be an afterthought just to fill in the triangle, but the vibes between the two of them lit up the page. If Gideon’s servitude to Anwyn started out as a ‘marriage of convenience’, Gideon’s sexual relationship with Daegan is an ‘enemies to lovers’ trope. Gideon hates what Daegan is, even as he grudgingly respects and admires him. Gideon hates and is confused that he is so attracted to a man. Daegan is less hung up on the manlove aspect than Gideon is and is the more aggressive partner in the pursuit. Their banter is funny, playful, and totally sexy, and I found myself far more interested in when Daegan kissed Gideon than when either man kissed Anwyn.

The entire story is not all happiness and kittens and manlove, though. I had a few issues with the story. This is the third one in a row that I’ve read from you that features a heroine brutalized and raped, and how that brutalization is the catalyst for the next stage of her life. While your books are about dubious consent and submitting all to your partner, I’m not sure I’m keen on this trend, if it is one. In addition, I felt that parts of book one went on a bit too long with Anwyn’s torture and struggle to become a vampire. These books are about dark, sexy needs and hungers, and this was more like the vampire version of the Exorcist. I’m not sure what I was expecting, but that wasn’t it.

I’d give book one – Vampire Mistress – a B-.  It was intriguing and the storyline interesting, but I felt Anwyn’s struggles with her vampiredom felt a bit too much for too long, and Daegan was more of a minor player in this book.  However, it picked up speed nicely at the end and I was eager to read the next.

Book two, Vampire Trinity, felt like an extension of the first book – so much that when you began recapping the last story at the beginning, it felt almost painful to me. It would have been helpful if I’d had the six month wait between books, but since I did not, I was impatient to continue forward. Not your fault, but it did pall my enjoyment a little. But after the slow start, we delve back into Anwyn, Gideon, and Daegan’s world quickly enough, and watch their relationship escalate, and I thought this book was like a well-orchestrated song from a favorite band. The sex was incredibly sexy, the tension between Gideon and Daegan smoldering, and Anwyn was strong and came into her own as a vampire without being declawed by the two strong men at her sides. I liked this book quite a bit and wouldn’t mind if you revisited their relationship once more in future books. B+

PS — For those of you looking to pick up these books, I just wanted to point out that the trade paperback versions of both are highly discounted at Amazon right now. I purchased both for the Kindle, and after sales tax, spent double what I would have for the paper. Fair warning.