You are my go-to author for thrillers and romantic suspense. “Unspeakable” is taut, hot, had me glued to it for the last 100 pages and is on my rec list for July releases.

Elaina McCord doesn’t want to be working in the FBI office in Brownsville, Texas but that’s where she was sent after finishing her training at Quantico and that’s where she finds herself dealing with the usual macho bullshit from her male colleagues: they either ignore her, hit on her or talk down to her. But her assignment to a murder investigation on Lito Island is the break she’s been waiting for and she’s not going to give in to her frustration. Except that her reception by the local cops isn’t encouraging and the most acceptance she finds is from true crime author Troy Stockton. 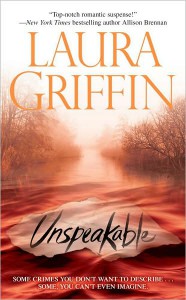 Elaina begins working the case, offering her suggestions – which are usually ignored, and being annoyed that where ever she turns, Stockton seems to already be there. Since bodies are piling up and a few cold cases are being tentatively linked to their unsub, Elaina won’t turn down his help – and he’s sure easy on the eyes – but she doesn’t want to risk anything she says showing up in his next best selling book.

The ease with which the killer gets access to his victims and disposes of the cut up bodies is maddening. There’s something they’re missing and it’s right under their noses. But no one realizes what it is until Elaina notices something and begins talking to someone in the cybercrimes unit at the Delphi Center. Will they unravel the mysteries before the killer strikes again or will Elaina be his next victim?

In your Acknowledgments, you mention how many people helped you to get the details and feel for the police work correct. Please thank them for me as once again it all seems so real to me. There’s the tireless slogging through old case files, the determination of a homicide detective to solve a case even if it’s five years old and there’s almost no evidence, the helplessness felt by officers as they break the news to another grief stricken family that their daughter’s remains were just found, and the cold, hard fury that drives them to find this monster who enjoys eviscerating women.

I enjoyed reading about Elaina. She’s human and makes mistakes. And I think that a lot of women could identify with her as she works to prove herself in a male dominated field. She’s also intelligent, hard working, notices the little things which when strung together can lead to a break in the hard cases. I applaud her decision in the end because she makes it not to prove something to someone else but because she feels it’s the best thing to advance her career. Oh, and despite her actions in Matamoros at least she doesn’t offer herself stupidly as bait to the Texas killer. That was a sweet surprise.

Elaina’s theory about the unsub’s first victim from ten years ago blows one of Troy’s novels, which was based partly on that case, straight out of the water – which pisses him off. But not because Elaina’s right – Troy has too much respect for the fact that she caught this connection. Instead it makes him want to help in any way he can to get the SOB who did do the crime. I kind of wondered throughout the book if Elaina and Troy’s relationship wasn’t skating the fine line of Elaina’s professionalism. But I did like watching Troy have to work to earn Elaina’s respect and to reel in this tough woman who doesn’t do “girly.” I love the scene where she whips out her Glock and tells him to stay back while she checks something out. That put him in his place.

I like a lot of the secondary characters including the couple being set up for the next book. Kudos for having their presence in this book be related to the crimes being solved and not just place holding until their time on center stage. Weaver is a great partner with wonderful lines and I would love to see something for him in the future.

If Weaver was surprised to find Troy out here leaning against his car, he didn’t show it. He stopped beside the battered Taurus and pulled out his keys.
“Hey, I think you dinged my car,” he said.
Troy scowled at the sedan. It was a heap, just like Elaina’s. “I can’t believe you guys drive these things.”
“We took a vow of poverty. What can I do for you, Mr. Stockton?”
“Troy. And you know exactly what you can do for me.”
“I don’t know what that is,” Weaver said.
“Bullshit.”
“Okay, I know exactly where she is, but I’m not going to tell you.”

Ronnie, the ass shooting mother, is fabulous in her one scene and Chico is a solid law officer through the whole book.

Troy and Elaina work well together and eventually play well together. If you know what I mean. And even though the “I love yous” don’t arrive – even in their minds – until very late in the game, it’s obvious that they’re getting under the other’s skin. I also like that they can laugh with and sometimes at each other.

He went inside the house to get another glass. When he came back out, he poured some tequila and slid it in front of her, then sank into his chair, facing the water.
She lifted her glass and looked at the amber liquid.
“It’s from Jalisco,” he told her, and then watched in amazement as she tipped her head back and poured it down her throat.
“Well, shit, that’s one way to do it.”
Her eyes slammed shut. She bent over and made a sound like a gagging cat.
“Laina?” He pounded her back. “Hey, you okay?”
She shook her head vigorously, and he couldn’t help it – he started to laugh.
Her head snapped up and she wheezed something at him.
“You’re supposed to sip it, not shoot it. This stuff’s three hundred bucks a bottle.”
She winced and shuddered, and he tried to soothe her by stroking her back.
“It’s awful,” she gasped.
“You just have to get used to it.”
“Why would you want to?”

This time the killer is another sick fuck. I have to wonder where you rom-susp authors get your ideas. Hopefully from some crime site and not from your own fertile imaginations. Just kidding! Anyway, I kept waiting to hear the way he got his victims to open their doors and let him get at them. And the way you describe is so devilishly fiendish and clever that I hope no one ever tries it because I’d be willing to bet it would work – all too well. When I said I didn’t put the book down for the last 100 pages, I meant it. And the final chase scene kept me riveted.

An unputdownable book is a wonderful thing to find. An author who can make my heart race at the possible fate of a victim yet keep from grossing me out with too vivid details is someone I look forward to reading again. And the excerpt from the next book makes me want to be able to read it already and not have to wait. Good deal all around.