I picked up this book, the first I’ve read by you, because I was intrigued by the blurb. I’m fairly cautious about trying new writers, but marriage of convenience stories usually get my attention, and wronged heroine stories pique my interest even more. 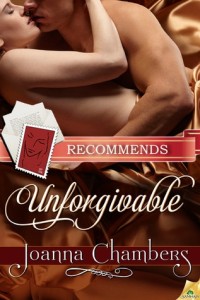 When Unforgivable opens, Rose Davenport is just recovering from a near-fatal illness. She is self-conscious, to say the least, about her looks, which have not recovered quite as well. But when she meets Gil Truman (a meeting engineered by their respective fathers) she is pleasantly surprised by how kind and warm he seems towards her. It makes Rose feel better about their arranged marriage, which her father has just told her about. What Rose doesn’t know is that Gil actually isn’t told about the marriage until after he meets her; he would’ve been considerably less welcoming if he had been. Not only does Gil have no interest in marrying this young (Rose is only seventeen), quiet and mousy-bordering-on-homely girl, but he is in fact in love with another woman. Unfortunately, he’s informed by his father that gambling debts, estates in danger of being lost, no choice, yada yada yada etc. etc. So it’s a very different Gil that Rose encounters when next they meet – at the altar.

After the wedding, Gil takes Rose to a remote estate and dumps her there, having consummated the marriage, but only just. He isn’t truly awful to her, but he is pretty cold, mourning his lost love and resenting the hell out of his father. Maybe it wouldn’t be so painful to read about if Rose weren’t so young and vulnerable (traits that Gil recognizes, and which make him feel guilty, but don’t really make him treat her any better). Rose is hurt by the realization of just how unwanted the marriage is, but by the time Gil leaves she’s recovered enough backbone to tell him that she hopes she never sees him again.

Five years go by, and Gil is living it up in London, philandering and carousing. Meanwhile, Rose has regained her looks, her health and her confidence, and impulsively decides to travel to London and confront her ne’er-do-well husband. Even more impulsively, upon discovering (from her father’s mistress, with whom Rose is friendly) that Gil will be at a masked ball the night she arrives in town, Rose allows herself to be convinced to attend the ball in disguise so she can check up on him while remaining incognito.

I think we all know where this is heading. And it’s familiar ground, really. The somewhat high-concept “hero cheats with his own wife at a masked ball” plotline has been used before, memorably by Mary Balogh, among others. In addition to that element being familiar, there are a number of other elements of the plot that remind me of many of the historical romances I’ve read in the past year – I’ve read a lot of MoC and estranged couple stories.

That said, familiarity isn’t necessarily a bad thing. In Unforgivable, the familiar is given new life. There’s nothing remarkable about the story or the characters – but it’s a good story, well-told in fine prose, and characters that are imbued with some depth; they can be sympathetic and exasperating in turns. Of the two, Gil is the character who could be seen as unsympathetic (and probably will be to some readers), but I felt for him as he tried to come to terms with giving up everything he wanted because he had to clean up his father’s mess. He doesn’t treat Rose as he should, but that makes his remorse and repentance very satisfying (the book is a bit old-school in that respect).

Rose is definitely more sinned against than sinning, but she’s not a martyr. It’s nice to see her grow from the sad, defeated girl she is early in the book. Like many an abandoned heroine, she comes into her own by managing her husband’s estate, and she does it well, gaining confidence as she matures and grows more competent. There was a point in the book where I felt that Rose was taking too much responsibility for the state of her marriage, and I was dismayed because I had a pretty good idea of where *I* thought the blame belonged, but she straightened up before too long.

I liked the flashes of humor in the book, as in the exchange of letters Rose has each year, first with Gil, and eventually with his secretary, inviting her husband to spend Christmas with her. Rose eventually becomes quite sardonic in the exchanges, while the secretary struggles to maintain some dignity though the reader suspects he’s mortified by his employer’s husbandly neglect:

Thank you for your letter of 2nd December. I enclose, by way of a Christmas gift, a lambswool scarf. I beg that you will wear this to keep off draughts. It will not do for you to neglect your health. My letters to my husband must not go unanswered. In fulfillment of my wifely duties, I will send another invitation next year. You may wish to draft your reply now to save time.

Overall, there is nothing very new and different in this book; it’s simply a familiar type of historical romance, done very well. My grade for Unforgivable is a B+.