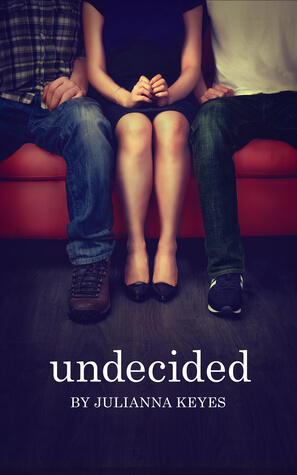 When you sent me a review request for Undecided, I hesitated. The cover suggested “love triangle” to me. (Apparently I’m not the only one.) You kindly reassured me that there is no love triangle and so here we are.

(There are two guys in the story and by the end of it, Nora has had sex with both of them – but there’s no love triangle. I promise.)

In her freshman year of college, Nora Kincaid decided to cut loose. Unfortunately, Nora has only two speeds; on and off. She threw herself so fully into cutting loose, she managed to nearly fail the entire year’s subjects, was arrested and had to perform community service over the summer and, is on academic probation requiring regular meetings with the Dean. Her full scholarship has been cut to partial and her father has agreed to pick up the tab but only if she buckles down and studies and stays out of trouble.

She’s been emailing with “Matthew” about renting a room in his 2br apartment. Apparently Matthew had a similar issue to Nora last year and they are both looking for a studious, no-parties allowed, roommate to keep each other in line and out of the way of temptation.

It turns out however, that “Matthew” is Kellan. (Matthew is his middle name). Kellan is the most popular guy on campus (he wanted to weed out the genuine enquiries, hence the name deception) – a party dude with a prodigious (if metaphorical) black book of conquests (there’s also an actual list on a certain campus bathroom stall which is regularly updated). The year before, Nora was one of the girls added to that list. Kellan doesn’t remember.

Nora can’t decide if being non-memorable is a bug or a feature. She knows it’s a bad idea to actually move in now that she knows she’d be living with Kellan, given their history (even if he doesn’t remember it). But he offers her a big break on the rent and it’s a nice place and she really has to move out of the summer dorm ASAP.

I hesitate. I already know it’s true, but hearing it from someone else feels weird. Like it’s more true, more permanent, more wrong, somehow. Like how you know streaking down Main Street is a bad idea, but hearing your parents say “You ran naked down Main Street, Nora!?” makes it sound even worse.

Kellan’s best friend and wingman is Crosbie Lucas. He is also popular but he doesn’t quite reach the heights (depths?) of Kellan’s fame. Both men are on the track team and did well in the national championships the year before but, as usual, Crosbie finished just behind Kellan. Crosbie is a little shorter and more bulky than Kellan. Kellan is GQ gorgeous but Crosbie has more of a wrestler’s build. Kellan is tall, dark and handsome. Crosbie is a handsome (but, objectively, not quite as handsome as Kellan) and a ginger. Nora has a huge crush on Crosbie however. For her, he’s the first choice.

Looming over what eventually becomes their burgeoning relationship (it takes some time to develop – something I liked) is the knowledge that Nora had sex with Crosbie’s best friend. You just know that sooner or later that information is going to come out.

I enjoyed Undecided quite a bit. The title refers not to Nora’s inability to choose between Kellan and Crosbie (there’s never really any question – she’s all Team Crosbie), but about her uncertainty re her degree.

Over the course of the book, Nora develops a solid friendship with Kellan (entirely platonic) and a lovely not-platonic relationship with Crosbie. She also renews her friendship with her partner-in-crime (literally) from the year before, Marcela, who works with her at Beans, the local coffee shop and also attends the same college.

I don’t often read about the wingman getting the girl. In fact, I can’t remember ever reading such a book. Added to that, Crosbie is an amateur magician, so as heroes go, he’s extra unusual. He was a bit of a horndog the year before (nowhere near the level of Kellan’s exploits though) but he found it to be unsatisfying and he’s not interested in that anymore. He is interested in Nora. Given that Nora has to not get into any trouble this year, hanging out with Crosbie might be considered dangerous – he has a reputation after all. It was an interesting conflict which made the book stand out from the crowd even further. In the end, the main issue between them was the closet (literally) hookup with Kellan the year before but again, how this was resolved was something which made the story feel fresh and new (even though I can’t actually remember reading this set up before).

New Adult is about coming of age and there is a clear development for Nora, Crosbie and even Kellan over the course of the novel. Nora settles into her skin and learns to be comfortable with herself. She navigates past mistakes and learns how to avoid future ones. She takes responsibility for her actions and grows up. All of this was well done and interesting to me but I’d be lying if I said it wasn’t the romance which was the main draw. Crosbie is a lovely guy – a guy one would be happy to take home to meet the family. He has his insecurities and vulnerabilities too, including a lingering concern that Kellan is the better option. (When I was a teenager/young adult, my best friend was on the “knock ’em dead” side of the beauty spectrum. While I was no slouch, I was always the “wing-girl”, so I felt for Crosbie in this regard.).

There is plenty of time spent developing the friendships in the book and showing that Nora’s circle is wider than just her romance with Crosbie. But equally, there is plenty of romance in the book as well. I enjoyed the writing style and the humour in the story and I liked the way you demonstrated intimacy by little things such as in-jokes, as well as by the more obvious means (ie sex). Win.