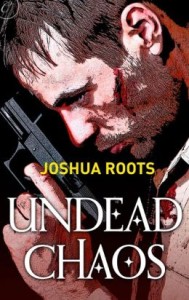 I really, really, really hope you meant for this to be an over the top, fun, tongue-in-cheek type book.  If you did, you succeeded beautifully.  If you didn’t, well, I guess my sense of humor and the absurd got in the way.  You’re definitely going to get a HUGE “thank you for writing this” from me – I loved it!

Marcus Shifter is a Washington DC-area Warlock – a man who can wield magic with the best and worst of them, usually with comical results – who comes from a very long, powerful line of magic users, and who occasionally takes the odd banishing job to help pay the rent.  After he gets called to banish a woman’s already dead, now reanimated husband, he discovers that darker magics than he’s ever dealt with are at play.  With only his conscience and warped sense of what’s right to guide him, and a cast of friends as strange and misguided as he is, he delves deep into the fetid, bloated underbelly of necromancy to discover the truth behind the too-weird-to-be-happening occurrences.

I love that Marcus’ credo is “it seemed like a good idea at the time!”  This man gets himself into more trouble when he tries to think through a problem than if simply charged in, guns and mouth blazing.  I once had a Maine Coon cat just like Marcus.  We always knew when he was about to do something flamingly stupid – we’d hear what we called his “suicide trill” just seconds before he ran headlong at the sliding glass doors, trying to get to that other cat (his reflection) who was running at him from the other side.  The thing is, like the cat, Marcus is just so lovable and earnest about it that it’s hard to stay mad at him for long, even when he does something like burn down a bar or attempt to detox an oracle the hard way.

To say the book is a romp is a wild understatement.  I rode the wave of emotion and hilarity all the way through, going from the highs of Marcus being one of the “good guys” to the lows of him having done something so monumentally stupid, all I could do was sit there, shaking my head, moaning “No, Marcus!  No!”  It would have been so very easy for you to have used a deus ex machina to wrap the book up, but you did it the hard way, showing me the conclusion to a book-long-running plot that I absolutely did not see coming.  Oh, once I saw what you did there, it made perfect sense – but you hid the genius beneath the “Bad News Bears”-like antics.

One of the sweetest parts is Marcus’ very innocent romance with Quinn, the daughter of an infamous necromancer.  While it isn’t sugar-shock inducing, it is utterly adorable.  You could have very easily played it for laughs, but instead you chose to use it as a foil to everything else that was going on – a balance for all the craziness.  As I read, I kept thinking “Oh, I know where this is going.  How predictable.”  Then you’d pull the rug right out from under me.  There’d be a left turn so unexpected that I was left staring at the page going “You wonderful jerk.”

All of the characters are incredibly well developed and fit their roles beautifully and the description of the Underground is deliciously creepy and wonderful.  The fact that Marcus is a very well rounded character with slightly different than normal hobbies is just the icing on the cake.  Of course, there are some places I just shake my head a little at some of the stereotypes and “ever afters,” but those are few and far between.  Though, in reading about you-the-author, I can’t help but wonder if Marcus has just a little more Gary Stu* in him than you originally wanted.  After finishing the book, I looked at my husband and asked what he thought it would take to get you to write the story of Marcus’ parents.  Of all the characters, I think they are my absolute favorites.

If I had to give a criticism of the book, it would have to be that sometimes things were a little too over the top and just a little too far to stretch for believability.  Though, even then, it’s not a deal-breaker.  Things are constructed in such a way throughout the book that it’s clear we’re not meant to take it too seriously – it certainly doesn’t take itself seriously at all!  My overall impression is that this book is the bastard love child of Simon R. Green and Jim Butcher as raised by Spider Robinson and Katie MacAlister, with Robin Williams cast in the role of Fairy Godfather (though no actual fairies were harmed in the making of this book.  I don’t think.)  B+

* The male equivalent of a Mary Sue character.  Mary Sues and Gary Stus are generally idealized versions of the author-as-protagonist.