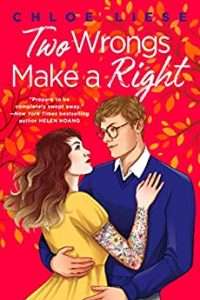 I have a confession to make. I haven’t read Much Ado About Nothing. I haven’t seen the movie either. Yes, I am a Philistine. Two Wrongs Make a Right is an homage to Much Ado so it’s probably relevant I say that up front. (I expect it adds something to the reading experience if one is familiar with the play but I’m here to say the book stands well on it’s own so for readers who are like me, well, you’ll be just fine.)

When I started the book I didn’t know it had any relationship to Shakespeare at all. I picked up the book because you wrote it – I didn’t need to look further than that to want to read it. Because I haven’t been living entirely under a rock I have however heard of Beatrice and Benedick (that’s something, right?) and I clued in pretty quickly. Google is my friend.

Beatrice Wilmot is a twenty-something artist with a bad case of creative block as a result of damage from a bad relationship. She hasn’t told her twin sister, Juliet, about everything that happened in said relationship and so Jules doesn’t know that Bea has good reason to want to be single for a while longer. As a result, Juliet and their friend group, are dead keen for Bea to couple up and are on the lookout for any potential options.

Jules is dating Jean-Claude and has been for three months when the book begins. It is Jean-Claude’s birthday and his friend and roommate West is in attendance, along with their wider friend group.

Bea is autistic and has some social anxiety. She freely admits that it is mainly through Jules’ influence that she has the relationships she does and any social life at all. As a result of her autism she is clumsy and this is a problem when she first meets Jamie Westenberg. Over the course of the evening, she spills cocktails on him – twice. Bea immediately decides that Jamie is judging her for her many colourful tattoos (he isn’t, he has anxiety and some compulsive tendencies and he gets tongue-tied when overwhelmed which can come across as being snobby.) As a result of some conclusion-jumping and the cocktail-spilling, it’s fair to say that Bea and Jamie do not hit it off.  One of her little rebellions is to call him Jamie rather than what everyone else calls him – West. It starts off as an annoyance. It becomes something special between them.

Because of meddling friends on both sides, the pair are corralled together multiples times over the course of the party and right up until they get stuck in a closet and they realise – with horror – they are attracted to one another, it’s pretty much awful.

Enemies to lovers is not my favourite trope. I dislike it when people are mean to one another. So that first little bit of the book didn’t work so well for me. I’m also a hero-centric reader and I identified a little more with Jamie generally so I thought Bea was too hard on him at the start. Also, I had the benefit of Jamie’s POV – something Bea did not.

Home in the dark, I lie in bed, staring up at the ceiling. I can’t sleep. When I shut my eyes, all I see is Beatrice in my arms. Those sky-blue-slivered-with-grass-green eyes, cloud gray swirling the perimeter. That delicate ink sweeping over her trapezius muscle, disappearing beneath the plunging neckline of her dress. The fabric cinched at her waist that my hands ached to unzip, to feel every rib, the slope of her hips, then draw her close and—

I peer down at my cats at the foot of the bed, twin pairs of lantern eyes in the dark.

“You’re right,” I tell them. “Best to nip that thought in the bud. That woman is a tattooed tornado of flying cocktails and unsolicited astrological commentary. We could not be more different or unsuited.”

After that, Jules tell Bea that she has made her a date for the following Saturday with “someone she knows” but will not give her his proper name. Instead, she says they will only know each other by their middle names for now and communicate via text for a week until they meet. Bea will be “Adelaide” and her mystery man’s middle name is Benedick – so “Ben”.  Jamie is told essentially the same thing in reverse by Jean-Claude and for reasons which are a little beyond me, both agree. And, what made me raise my eyebrows was that neither even considered that who they were really texting with was their recently met nemesis. This pair have a small and close-knit friend group so it seemed unrealistic to me that they would not work it out.

Anyway, the have deep and meaningful messaging exchanges over the course of the intervening week and both are excited to meet the other – only to find out exactly who each other is when they meet. Both are angry at being played and Bea impulsively suggests they get revenge by pretending to date and fall in love and then staging a massive break up to teach their meddling friends and family a lesson.  It’s a little thin.

Up until that point I was a bit iffy about the book to be honest. But then Bea and Jamie started to hang out together and everything changed. Very quickly they commit to being open and honest with one another. They are kind to one another. They do not jump to conclusions but give each other the benefit of the doubt. Jamie, a pediatrician, has a medical understanding of autism and is naturally a carer so he’s always looking for ways to make things more comfortable for Bea. Jamie is a bit starchy and rigid. Bea is a colourful whirlwind. But they fit.

Gently, he tugs me closer, until we’re nearly chest to chest, his eyes holding mine. “That means a lot, that you told me.”

“It means a lot that you didn’t act like you see me differently now.”

He tucks a strand of hair behind my ear as the wind whips it across my face. “I don’t see you differently. I see you better.”

I loved the kindness Beatrice and Jamie showed one another. I loved their honesty and their bravery – although I perceived Jamie as the braver one and I’d have liked it to be a little more even. I enjoyed their banter which, after that first chapter was no longer mean. I loved that they realised how good they were together and did not let silly plans get in their way.

I was quite focused on Bea and Jamie and paid little attention to Jean-Claude but it became clear that Jamie’s friendship with him was more of a bad habit than anything real or healthy. Jean-Claude was the one who stuck around. But Jean-Claude has issues and there is trouble in the Juliet/Jean-Claude paradise bubble. And this trouble spills over to Bea and Jamie in ways I understood if I squinted but which I didn’t fully get.

I saw a lot of Bea’s vulnerabilities and and equal amount of Jamie responding to them in ways which were supportive and caring and not possessive or suffocating. But Jamie had his own vulnerabilities and in the end, Bea isn’t careful with him the way I thought she needed to be. The end of the book was generally abrupt. So the conclusion of the book was not quite as satisfying for me as the middle.  (And, when I say middle, that equates to about 3/4 of the book.)

What I was confident of was that this couple belong together and as long as they didn’t let others interfere, they’d be fine.

I struggled with the grade a little. That first bit and that last bit were a B. But the rest was just delightful. But the 3/4 in between, that was a B+.

Jamie frowns at the canvas. “You really see me like that?”

He’s quiet for a long moment. “It just feels like it’s a better version of me than I see.”