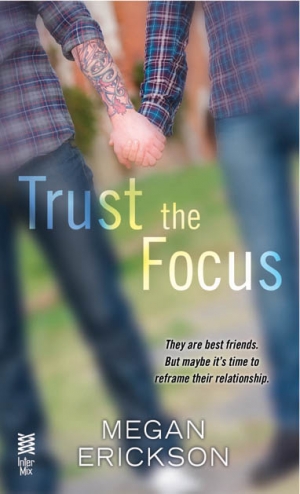 Sometimes we pick up books for random reasons. When I learned your main character was a photographer, I lit up with interest. I guess I’ve been interested in reading more photographer-characters that aren’t related to tabloid journalism. Your novel, Trust the Focus, is an M/M new adult romance. I’ve heard this is an expanding area in the category, so I was intrigued to see how it would tackle key tropes and conventions.

Freshly graduated from college, Justin Akron is ready to embark on a cross-country road trip to scatter his father’s ashes. Accompanying him is his best friend, Landry, who wants to share the experience. It’s also Justin’s last hurrah. In the fall, he will assume the life’s path his mother laid for him: that of campaign manager for her Senate bid.

The only problem is that Justin’s been living a lie. His true passion is photography, not running a political campaign. He’s also extremely closeted—partially out of fear for disappointing his conservative, controlling mother. He’s aware of this fact; he’s not really in denial. Justin’s merely prepared to live that lie, except a summer-long cross-country trip with his extremely out gay best friend might put that intention to the test.

I had a lot of sympathy for Justin. He’s in love with his gay best friend. He’s aware of his sexual attraction to guys—and love for one specific guy—even though he’s unwilling to admit it out loud. He’s just planning to live in the closet for the rest of his life. I found that extremely sad, mind you, but I understood his reasoning.

On the other hand, I do shake my head at him. Landry is so obviously in love with him, too. There were interactions early in the novel where I squinted and said, “Purely platonic friends don’t really do that. Gay, straight, or whatever.” Seriously, I was having flashbacks to the last 10 minutes of the Legend of Korra series finale.

(I realize some people misinterpreted those last 10 minutes and said it was about friendship. Let’s ignore them, because they’re wrong.)

I liked that Justin’s struggle and acceptance with himself didn’t go smoothly. He had made some mistakes and backslid occasionally. I also appreciated the negotiation between being proud of your sexual identity and staying safe in unfamiliar places. In a perfect world, LGBT people wouldn’t have to worry about such things, but we don’t live in that world. Trust the Focus acknowledges that.

There’s an incident from Landry’s past that he keeps secret from Justin. I don’t know how to feel about this. It’s not that I think it shouldn’t be included. I don’t think it was gratuitous. I acknowledge these things happen, but I felt like it didn’t have enough weight. I get that it’s Justin’s story, not Landry’s, but it affects them both. The handling seemed clumsy and more trope-reliant at times.

Justin and Landry’s relationship progressed in a realistic way for me. There’s the concern over transforming a friendship into something romantic. There’s Justin’s finally coming out of the closet. And there’s Landry’s fears that Justin is going to retreat back into it at the first sign of difficulty. These were all believable, valid conflicts and they wove together in a compelling way.

Along those lines, I liked the resolution between Justin and his mother. It’s not bleak, but it’s also not all rainbows and glitter either. It was realistic, with a smidge of hope. That’s all I could ask for.

I’m not the biggest M/M reader, but I’m glad I took a chance on this book. (Photographers, FTW!) I also supremely glad this is not a gay-for-you book, because I hate that trope with a passion. Definitely worth a look, especially if you’re a new adult or M/M reader. B+