I picked up your self-published contemporary romance on a whim and it turned out to be one of the best and most satisfying books I read this year. The rest of your backlist looked to me like paranormal normance, which I don’t read much of, but I really wanted more of your voice and this Carina Press series was recommended by Twitter buddy and occasional Dear Author commenter Allison, so I decided to give Trancehack a try. In additional to the paranormal elements there are also science fiction, urban fantasy, and mystery aspects, making it a true crossover book and a bit hard to classify (but in a good way). It didn’t achieve the heights of Good Time Bad Boy for me, a tall order I know, but I enjoyed both the characterizations and the world building. 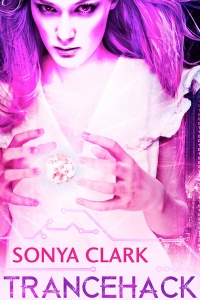 This is the first of a three-book series set a few decades into the future. The United States is structure by a system of apartheid which separates Magic Born people (those with magical abilities) from “Normals.” Magic Born are sequestered in run-down neighborhoods in some US cities, their movements are constantly monitored, and their opportunities are severely constrained. Whether or not you are Magic Born is determined at birth from your DNA, and Normal parents have their Magic Born children taken from them and put into orphanages or foster homes. Even wealthy, affluent people are subject to these rules, so having children at all is a fraught decision. These policies are the outcome of the Magic Wars that occurred two generations ago, so the psychological scars from these conflicts still affect citizens in the present.

When a prominent and politically connected scientist is killed, Detective Nathan Perez is forced to enter the unfamiliar world of the Magic Born to solve the crime. Nate has recently moved to New Corinth from a town without a Magic Born community, and all he knows about them come from the prejudices in which he was raised. Needing a source from within in the community, Nate talks Calla Vesper into being his guide. Calla is suspicious of him but has her own reasons for wanting to know what happened in the murder, so she reluctantly goes along and Nate is drawn into the Zone and its society. Of course they are attracted to each other, and of course this is going to create its own set of problems.

I really liked the characterizations and the way the romantic relationship began and progressed. Although it seems like a standard privileged-man, subordinated-woman setup, the specifics of the two people subvert that in intriguing and believable ways. Both characters are strong, smart, and competent. Calla has the powers to do things Nate can’t (and to protect him at times), but Nate has the privileges of being both male and a Normal. Nate also has some of the cluelessness that comes with privilege, and the way he deals with it made me like him more believable and more likable.

The oppression experienced by the Magic Born has elements from a variety of real-life situations in US history and contemporary society, but it blends them in a way that contextualizes them and makes them feel organic to this particular setting. The way in which the Magic Born have created a community despite all the obstacles was especially well done. They make the most of what they have and in some ways their community is more robust and supportive than those in the more privileged Normal world, but they’re always aware of and shaped by their isolation and deprivation. There are interesting secondary characters, some of whom will turn out to be the main characters in succeeding installments of the trilogy, but they are fully integrated into the story and don’t come across as sequel bait.

I found the world depicted here thought-provoking and I appreciated that there was no sugar-coating of the difficult future Nate and Calla would face. We see enough about the characters individually and separately to feel some confidence that they know what they’re getting into, and that they truly love each other by the end, but it’s not going to be easy. The best part for me is that while they exhibit all the physical and emotional attraction you’d expect in a romance, the development is enough of a slow burn that by the end they know a fair amount about each other as people.

The story drags a bit in places, and the resolution of the mystery packs in too much material in too short a space, but overall the novel works well. I’ve already bought the next two installments and am looking forward to reading them. Grade: B+