REVIEW: Thrown By A Curve by Jaci Burton

Just last baseball season, I finally became seduced by the sport after watching the Washington Nationals’ (Go Nats!) improbable run into the post season. The Nationals’ star pitcher had reconstructive elbow surgery almost two years ago now, so the set-up for Thrown by a Curve interested me. Garrett Scott is a star pitcher for the St. Louis Rivers, a fictional MLB team. He has injured his shoulder and had the surgery to repair it, but his physical therapy isn’t helping him heal as quickly as he’d like. One day during a session with the Rivers’ training staff, a young female trainer catches his eye. She’s been watching his PT intently and he asks her why she thinks the therapy isn’t working. She tells him something to the effect of: “You’re barely trying, you bitch too much and you’re never going to heal if you don’t pull your head out of your behind.” He immediately decides that he likes her and he wants her to oversee his physical therapy. 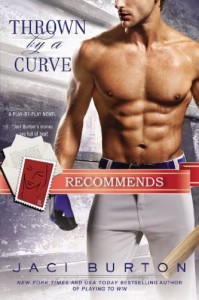 Alicia Riley cannot believe she just said that. And to top it off, now she’s been given the task of rehabilitating the Rivers’ most valuable player, Garrett Scott. She decides an unconventional course of treatment, getting Garrett out of the training facility and working him hard at more distracting training that will give his shoulder the proper work it needs. Garrett is intrigued by Alicia. She’s no nonsense, taking absolutely no crap off of him, even going so far as to drive to his house and drag him out of bed when he skips a training session. He knows she’s good at her job, but as he spends more time with her, the more he imagines a “friendlier” relationship with her. Alicia is worried. She’s also feeling the draw to Garrett, but she knows her career is riding on this rehabilitation and she’s definitely not going to let her physical impulses ruin the best job she’s ever had.

As Garrett’s training progresses and he heals more and more, the Rivers decide to send him to Florida where the rest of the team is training. Alicia takes up residence in the house where he is staying and their close proximity ratchets up the sexual heat between them. Alicia knows that there is a clause in her employment contract that would get her fired for fraternizing with a player, but Garrett’s draw is so strong. Will she be able to withstand his pull? Or will she give in to the desire they both so obviously feel?

This was a fun book. Alicia is a tough, no nonsense kind of heroine. She’s worked very hard to land her dream job, and she knows she can help Garrett, if she can just get through to him that what she’s doing will work.  The chemistry between the characters was sizzling, and I liked that Alicia was really torn about how she was feeling about Garrett. I also really appreciated Garrett’s evolution throughout the book. He started out as a spoiled star player, but as we get to know him, we understand his anxiety about whether he’d get back on the field, and more whether he’d recover his talent. I liked that he genuinely liked and respected Alicia, and I liked that even though he seriously screwed up, he worked hard to make it right with Alicia. I love a hero who knows how to say I’m sorry, and do it in a way that is genuine.  I thought that the sexual chemistry between the characters was very strong and there were a duo of his/her masturbatory scenes that I actually thought were really sexy, where generally such scenes make me very uncomfortable.

The book stands alone well enough, but past characters do make appearances, so first time readers will be aware that there were previous installments. That fact shouldn’t deter you though, I think the Play-by-Play series is one of the strongest sports romance series available and wherever a reader starts, they’ll find a satisfying love story. My grade for Thrown by a Curve is a B+.

→ Kati
Previous article: GUEST REVIEW: To Touch the Stars by Jeremy Pack
Next Post: Daily Deals: Historical romance, angsty YA, and a fantasy story of the son of a witch