REVIEW: The Year We Fell Down by Sarina Bowen 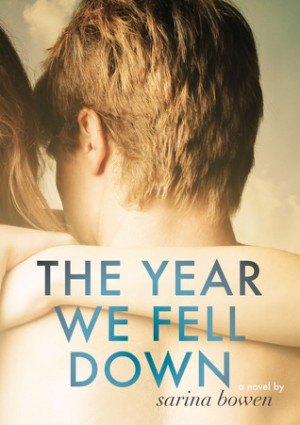 Angela James recommended I read this. I actually found it on my Scribd subscription (although not Kindle Unlimited for those who were wondering but it’s quite cheap at $2.99 and definitely worth the three bucks). It’s a terrific read, contains everything I love about New Adult and none of the things that irk me. I’ve spent the weekend recommending it and the thing that struck me most was that this wasn’t a story I felt like I had read before which, given how many books I read a year, is rare.

Corey Callahan planned to start Harkness College as a hockey player, just like her older brother before her. She’d been coached by her father and was a highly coveted high school recruit. A tragic accident places her in a wheelchair due to partially damaged spinal nerves.

There is no miracle recovery in this book. Yes, Corey can and does walk at times with the help of arm crutches but most of her time is spent in a wheelchair. Who she is physically at the beginning of the book is primarily who she is physically at the end of the book. But she never lets you feel sorry for her. As you lose yourself in the story, Corey becomes just a student who has a crush on her neighbor across the hall, is adjusting her dreams to something different, and learning to make new friends.

Adam Hartley lives across the way in McHerrin Hall, the “gimp ghetto”. The first floor of this dormitory has been made handicapped accessible with ramps, wide doorways and bigger rooms. Adam’s broke his leg in two places and is mending nearby. The two bond over their love of hockey. Adam is a would be hockey star frustrated by his own lack of healing but humbled by Corey’s no nonsense attitude about her own predicament. They end up spending a lot of time playing RealStix, a hockey video game, talking therapy, and learning about each other in ways that healthy Adam and Corey may never have.

There are little slices from Corey’s point of view that drive home how many accommodations she has to make in order to live in an abled society. When she’s in a dining hall, for example, she’s always staring at people’s asses. Sometimes the counters are too high for her. And in an old Ivy league school like Harkness, many of the buildings don’t have ramps or elevators.

When Corey goes to a party, she sits in a corner and has to be patient with people coming to her, rather than moving about freely. None of this is shared in a oh poor me fashion but rather good humor, self deprecation, and understandable frustration. It’s hard not to be charmed by Corey.

Adam is a roughneck from a poor part of town with a loving mother and an absentee father. (Don’t call him bastard. He hates that) He dates a high maintenance girl who leaves for a semester abroad. While she is away, they have an understanding which is why he is unperturbed that her facebook photos from Prague to Greece are filled with an Italian guy. It’s obvious to the reader that Adam likes Stacia, his rich girlfriend, for what she represents than who she is. But even that self awareness only lends to his attractiveness. He recognizes that it doesn’t say something good about himself and he wrestles with that particularly in the face of his growing feelings for Corey who is everything that Stacia is not.

→ Jane
Previous article: Tuesday News: Changes at Ellora’s Cave, Pew research on libraries and reading, research on e-reading and cognition, and a tribute to women on bikes
Next Post: REVIEW: The Promise by Kristen Ashley