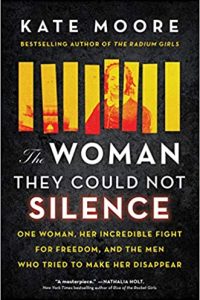 I listened to your first book, The Radium Girls back in 2018 and was enthralled by it. (It’s a fantastic book but hard to hear because of the infuriating and tragic content.) So when I saw you had a new book coming out I snapped it up.  It’s a very different book, following one woman rather than many but there are some similarities; some of it is hard to hear (I listened to the audiobook) but unlike in The Radium Girls, eventually, Elizabeth did (largely) find justice.

Elizabeth Packard was a housewife in 1860s Illinois, married to Theophilus, a Presbyterian minister. After the Women’s Rights Convention of 1848, Elizabeth began to think thoughts of her own and speak up. Theophilus was not having it. In particular, Elizabeth had quite different “new school” religious beliefs to that of her husband. Theophilus was anti-abolition, Elizabeth was not. (The basis of these beliefs were their religious views.) Theophilus demanded Elizabeth be silent if she could not agree with him. Elizabeth refused.

So he had her committed to an asylum where she stayed for 3 years until she won her release. Back in those days, married women had no rights separate to their husbands and all it required to get committed for insanity was the certification of 2 doctors. When Elizabeth entered the Illinois State Hospital, she found she was far from alone in being sane but having a husband who wanted her to shut up.

Elizabeth suffered in her time in the hospital, not least because she was separated from her six children. Even when she got out she had limited opportunity for quite some time to restore any relationship with them. Her youngest child was only a toddler when she was committed.

But Elizabeth would not be silent. She would not say she believed something she didn’t. And, she made it her life’s mission to change the laws all over the United States so that married women had property rights, that people could not be admitted to an asylum without a jury trial and to improve conditions in mental health institutions. She has been largely forgotten by history but she was a fascinating woman and so very brave and I’m glad I found out about her. She deserves to have her activism remembered and celebrated.

I listened to the book in two chunks of time. I found it a little too grim and took a break before diving back in. Once Elizabeth got out of the asylum I felt I could breathe a bit easier. There’s some irony there of course about me being able to take a break from Elizabeth’s travails where she could not.

The book is detailed and well-researched; fortunately for you, Elizabeth left many writings and so did Theophilus and other people mentioned in the story.

During the time Elizabeth was institutionalised and for some of the years after she was released, the US Civil War was going on and it was kind of jarring to realise that there was a whole society where the war didn’t seem to have as much reach apart from via the newspapers. None of Elizabeth’s son’s went to war (although she did not know that for part of the time because her contact with the outside world was strictly controlled when she was in the asylum) and it seems that Chicago and the places where Elizabeth lived in that time did not have any active battles or anything. As an Australian, it had been my impression that the whole country was a battlefield but that’s obviously not right.