I wonder if your debut novel, The View was Exhausting, was published as romantic mainstream fiction. If so it’s a romance regardless. There’s a central love story with a happy ending and emotional justice. That’s a definition of romance that works for me. The book was recommended to me and I’m glad I read it. 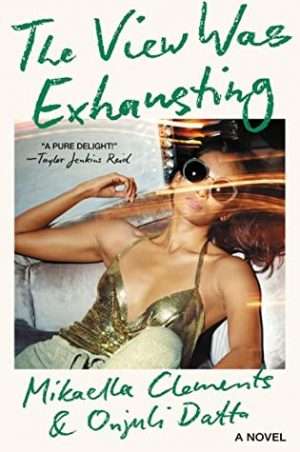 Whitman (she was named after the poet) “Win” Tagore is a 27-year-old British Indian movie star involved in a seven-year on again, off again relationship with Leo Milanowski, the playboy son of a wealthy hotelier and a supermodel. Leo and Win have great chemistry and fans who ship #Whitowski. Their separations, reunions, and romantic getaways are the stuff of fairy tales and gossip magazines.

But the relationship (at least the romantic part of it) is fake. When the book begins Win is fresh off of being badmouthed by her former boyfriend Nathan, a talk show host, and she and her publicist, Marie, have called in Leo to help them do damage control. Win and Leo are good friends but it’s possible that his role as her fake boyfriend is even bigger than that. Win is harshly judged by the press for things most white actresses would easily get away with. Her romantic-with-a-capital-R (or so people think) romance with the gorgeous Leo Milanowski mitigates some of the consequences.

We first meet Leo and Win in St. Tropez and we see almost immediately how exhausted Win is, how she’s hounded by paparazzi, and how much Leo’s presence helps at first. Their “romantic getaway” shows the public a supportive Leo and a fast-recovering Win. Her feelings for her true love have rekindled, it seems, and she isn’t pining for Nathan. We also see that Win’s life is demanding; her publicist, assistant and agent are always offering advice and information. She has limited privacy.

This introduction is followed by flashbacks to Win and Leo’s past. Their first “date” was set up by Marie, Win’s publicist, who thought it was a good idea to distract the public from a scandal that cast Win as hysterical; Win had drunk dialed her cheating ex and left a voicemail telling him exactly what she thought of him, and he released the recording to the press. At the time, Win was only twenty and her star was just beginning to rise. The scandal tarnished her image and she began to lose out on roles. Meanwhile Leo’s father wanted Leo to attend a gala at one of his hotels with a date.

Leo and Win hit it off so well that their chemistry immediately captured the tabloids’ attention. Win got the kind of publicity she wanted, but she also got a friend. She and Leo decided to extend their relationship into a week-long vacation in Europe. Toward the end of that vacation, they tested the waters and had hot sex. Leo suggested that they start a real romantic relationship but just then Win got a phone call from her agent. She had been offered her first lead role. She decided that her and Leo’s professional (more or less) partnership was too important to risk losing.

Back in the present day, seven years later, the chemistry between them is still there. After seven years, Win thinks she knows Leo well. When he says there’s something he has to tell her, she doesn’t expect a secret that explodes in her face and also has the potential to ruin her career.

Do Win and Leo know each other as well as they think they do? Is their relationship what they think it is—a friendship and semi-professional partnership—or are their feelings more confusing and murkier than they want to admit? Can they maintain the kind of relationship they’ve had in the past, or is that option now off the table?

One of the things I liked best about this book is that it’s essentially a deconstruction of the fake dating trope. It shows how difficult it can be to maintain that lie, how it can be a strain even when you really like the other person. That it isn’t all lighthearted fun to work to fool everyone around you, it’s can also be a source of stress.

I’m not the world’s biggest fan when it comes to the fake dating trope but this, in my opinion, is a much more grown up take on fake dating than 99% of them. In most of the fake relationship books I’ve read, the relationship is motivated either by immature reasons such as characters wanting to fool exes, or, if there are career-based reasons, they make little sense. I’ve also run into the issue that the celebrity characters are inconsistent and not much like real celebrities. They care about their image enough to enter a fake relationship yet aren’t otherwise unusually image-conscious or driven. That’s not the case here.

Win cares about her career more than about most things in her life. That’s not at all unusual in a movie star and I’m glad to see that level of ambition and dedication to a career in a heroine. The discriminatory treatment she gets from the press factors here; she knows that if she flops another British Indian actor may not be given a shot at movie stardom for years. But it isn’t purely selfless, either. She’s human, flawed, and all the more interesting because of that. There’s a standoffishness to her that fits with being a celebrity and seen as a commodity. She is image-focused because it’s her way of outsmarting the forces that obstruct her.

Leo is in many ways an example of a more familiar archetype—the jet-setting, gorgeous and wealthy man with a playboy image and a good heart. Yet he stood out to me among a lot of other heroes like that because of a combination of vulnerability, cluelessness, and gallantry, and because as sweet as he is, he isn’t perfect. The fact that as the son of a billionaire Leo grew up in a bubble isn’t shied away from. He went to a Swiss boarding school for high school, has grown up as much in England and France as in the US, and is so used to the flashing cameras of the paparazzi that he’s almost comfortable with them. He doesn’t have a career; though he’s talked about opening an art studio for years he hasn’t done it. He has had many more advantages than Win and sometimes even when he’s trying to be supportive he shows his ass.

The biggest reason I liked him, however, was that for seven years he was there for Win if she needed him, showing up on a moment’s notice to flirt with her and charm the public. He’ll do almost anything for her, and he’s told her so. And that leaves him vulnerable in the face of her coolness. This dynamic was engaging. Friends-to-lovers is one of my favorite tropes so I was also very happy on that score.

The romance here is romantic but in an unvarnished way. It’s as messy and raw as Leo and Win’s fake relationship is carefully prepared to look perfect. When their romantic feelings become apparent to them, that doesn’t make it easier to pull off their pretense, it makes it harder than ever. Both Leo and Win have a lot of the line and we see how the same armor that stands in Leo’s way is also Win’s only defense against a judging world.

I really liked the handling of the racism issue too. It felt like a natural outgrowth of Win’s situation and her life, and while there was—as there is in any book—an underlying message, the book never felt didactic.

The prose here is strong, with impactful dialogue and telling descriptions. Small details like what Win’s best friend wears to her wedding or what it is that clutters a couple’s house get across so much about them. And the confrontations between Leo and Win when their feelings pour out are searing.

The book was written in third person and I liked the POV structure—we’re in Win’s POV for the first long section, then in Leo’s for another long section, and then we return to Win’s. I don’t see that in many romances and it was done well here. By the time we got Leo’s POV I was salivating for it. Additionally, the book isn’t predictable. Leo’s secret isn’t one I anticipated. A few times I thought I knew what would happen next and then something else happened.

That Win had a small entourage and a schedule packed with appointments, calls, photo shoots, and more did a lot to give this book some of the texture of reality. There’s an epistolary chapter near the end that is an article from an entertainment magazine (something like Vanity Fair I imagine) that did some of that too (I also loved it).

Another thing I loved was the resolution to the last conflict. When the dark moment happened I didn’t see a way to a happy ending. But in the end there was one and when it came it was satisfying because it was believable and in character.

My biggest issue with the book is that it had a slow patch in the lead up to when Leo’s secret was revealed. I got impatient waiting for that to happen and I wish the pacing had been tighter in that section.

There were also a few things with regard to Win’s career that made me question their believability. For example, how interested could the tabloids have been in Win’s personal life when she was young and her star was only beginning to rise? It’s a lot easier to believe than some other fictional setups in that vein, but I still wondered.

At times, too, I wanted a bump or two less on Win and Leo’s road to happiness. I’m of two minds about it—those bumps made the relationship feel very real and I liked that about them, but emotionally I wanted them to share a moment or two of relaxation in the second half. Or maybe what I really wanted was downtime, a moment when I could relax.

This was a truly good book though and I feel grateful that I discovered it as well as the authors. B+/A-.

PS As I write this, the ebook is on sale for $2.99 at Amazon and elsewhere.