Last year I read and really enjoyed your book When Beauty Tamed the Beast, yet for some reason I haven’t gotten around to diving into your extensive backlist yet. When I saw that The Ugly Duchess was available for review, though, the plot blurb drew me in immediately. Our hero and heroine, James and Theodora (called Daisy by James though she herself prefers Theo) have been raised together practically from the nursery (she’s his father’s ward) and are in many ways best friends. When she is 17 and he 19, his spendthrift father informs him that he must marry Theo; not only has the Duke of Ashbrook run his own finances into the ground with bad investments, but he’s, um, “borrowed” some of Theo’s money in the mistaken belief that he could make it back and replace it before anyone knew it was gone. 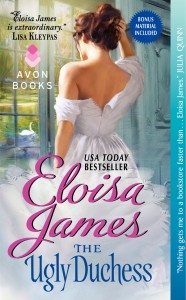 James has an understandably rocky relationship with his father, whose irresponsibility has long been apparent. He is furious not only at having to marry against his own wishes, but with his father’s insistence that he must make Theo fall in love with him; she cannot know that it’s her dowry he’s really after. James just knows that Theo will discover the truth and be devastated. He hates both the idea of hurting her and the inevitable end of their friendship. But his father forces his hand; the news that the estate is in such dire straits might not be enough to make James capitulate, but the prospect of his father going on trial for embezzling his ward’s inheritance is.

Meanwhile, Theo is chafing at the restraints that keep her under her well-meaning mother’s thumb. Theo is less than lovely, and in fact is often said to look mannish. She has strong features – dramatic cheekbones and an aggressive chin – and she is just sure that she would look much better were she allowed to dress herself. Her mother’s frilly, girlish choices – whites and pinks replete with lace and flounces – are intended to make Theo look more feminine. They end up having the opposite effect, and thus Theo is a bit of a reluctant wallflower during her first season in London. She has her eye on a matrimonial prospect – an acid-tongued young man whom she thinks she could impress with her wit, if only he’d notice her.

As it turns out, before James can even get very far in the “make Theo fall in love with him” plan, the lines between what he’s doing out of duty and what he wants are blurred. Theo is starting to look at James in a different light, too. When they are discovered in a compromising position at the Prince Regent’s musicale, James blurts out a proposal, and before you know it, they are married.

James and Theo have the sort of awkward wedding night you’d expect between two teenagers who had previously had a sibling-like relationship and who have little experience between them (James has had one mistress of short duration). But their next encounter is better – much better. Unfortunately, it comes right after Theo discovers that all of the papers that covered her wedding are calling her “The Ugly Duchess” and just before she overhears her horribly boorish father-in-law (seriously, he could have been taken down a couple of notches – he was so awful and offensive) spill out the “truth” about the embezzlement and the plan to manipulate her into marrying James. (I put qualifying quotes around truth because it’s clear that James’ feelings have become confused, even in such a short time – he’s actually very happy about the marriage, though tormented by the secrets he’s kept from Theo.) Just like that, the young couple’s wedded bliss is torn asunder; Theo kicks both James and his father out of the house – a house she now owns, due in part to James, who made sure during the drawing up of the marriage settlement that Theo was treated more than fairly.

I really liked the set-up here, even if I didn’t honestly understand why James had to “pretend” to fall in love with Theo. Their relationship seemed close and honest enough that he could have come to her with the truth – perhaps not about the embezzlement, but about the need to marry to save his estate. And honestly, everything happens so fast that he never really does much pretending or manipulating – which makes his intense guilt and their long estrangement feel kind of like a Big Misunderstanding. I generally consider it a “Big Mis” plotline if whatever causes the estrangement could have been sorted out in a conversation, and I think that’s sort of the case here. Not entirely, because there are psychological reasons on both James’ and Theo’s parts for their behaviors, but at least a bit (the fact that it does get sorted out in pretty short order in the end backs me up here, I think).

Even more problematic is that James’ solution is to take a ship (the one asset Theo specifies that he can keep) off and eventually, become a pirate (oh, sorry, privateer). Now, there’s a certain suspension of disbelief required for me to accept that a 20-year-old heir to a dukedom would take up piracy. The whole interlude didn’t really speak well of James’ character (and I’d previously rather liked him), though of course he’s kind of a Disneyfied pirate, only raiding other pirate ships and only killing really bad pirates. His attitude in the scenes depicting his years (yes, I said years) of piracy reminded me of nothing so much as Max from Where the Wild Things Are – he’s run away from home and he’s sulking his way through an awful adventure.

Meanwhile, Theo languishes in the country, rebuilding her absent husband’s family fortune. I was a bit disappointed here, too; there had been a number of indications that Theo had a strong personality and some interesting ideas about fashion and style that might bring her out of ugly-ducklingville and into swan city. Theo does head in that direction eventually, but it takes a while.

I liked the way that Theo’s looks were dealt with – often an unattractive heroine in a historical romance will have features like overly plump lips or big bosoms or thick hair or other traits that may (or may not) have been unfashionable at the time but are clearly meant to convey to the modern reader that she’d be considered attractive today. Theo instead seems to have the sort of strong features that might get a woman called “handsome” or “striking” – in a sincere, not a backhanded-compliment way. She’s not conventionally pretty, in other words, but she knows how to show her looks to their best advantage.

The pacing of The Ugly Duchess feels uneven at times – the last third of the book takes place over a much shorter period time than I expected it to, given the issues that needed to be resolved. The characters can be inconsistent, also, and some storyline threads are hinted at but not pursued (for instance, I felt it was strongly suggested early in the book that James was dyslexic, but it was never touched on again). I did like that some of James’ earlier traits – he has a fierce temper, for one – are shown to have been moderated by time and maturity. At the same it, it bugged me a bit that James had seemingly been improved by the separation, whereas Theo was really only healed of her neuroses (some of which had actually been triggered by James running off) by James’ return.

All in all, I felt like The Ugly Duchess had a really strong beginning, a problematic middle, and ultimately a satisfying (though also problematic) ending. Even when I was annoyed by the book or the characters, though, I found the story very readable and compelling. My grade is a B+. Now, to get to that backlist!