REVIEW: The Truth About Him by M. O’Keefe 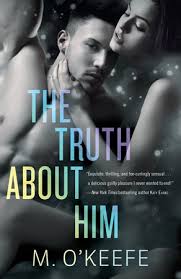 Everything I Left Unsaid followed Annie McKay, a survivor of domestic abuse on the run from her husband. In a trailer park in North Carolina, Annie settled down, hoping Hoyt would never find her. She also began a relationship with a mysterious man whose cell phone she found in her trailer.

Dylan Daniels did not know Annie’s background when they began having phone sex, but he asked her to keep an eye on Ben, the father from whom he was estranged, and he knew that because of Ben’s presence, the trailer park where Annie lived was sure to attract trouble.

The Truth About Him picks up where Everything I Left Unsaid ended. After meeting Dylan for the first time and consummating their relationship, Annie decides to break free from Hoyt on her own. But Hoyt finds Annie and threatens her life, insisting on taking her back to their Oklahoma farm.

The beginning of the book is very suspenseful, as Annie realizes that Hoyt has found her books, her phone with the text messages from Dylan, and her gun. When Ben knocks on her door, she does all that she can to push the old man away for his own safety. Ben walks away but calls Dylan.

I don’t want to spoil how Hoyt is removed from the picture – suffice to say what happens is violent and shocking to Annie. In the aftermath, Annie and Dylan are both unsure of themselves, uncertain how to get back what they had before Hoyt’s arrival. They also learn Ben has cancer.

Just when they begin to feel their way toward each other, Rabbit, a member of the Skulls, a biker gang Ben once belonged to, appears at the trailer park to threaten Dylan. It seems the MC had a big drug deal worked out, but Max, Dylan’s brother and the group’s current leader, is now missing. If Dylan doesn’t make Max return, Rabbit will set fire to the trailer park, starting with Annie’s trailer.

On hearing this Dylan makes a decision. He moves into the trailer next to Annie’s, where Annie’s friend Joan used to live, so that he can protect Annie. But at first he’s not sure how much to tell Annie. Dylan feels unworthy of Annie, uncertain he can bring her anything better than violence and danger.

Will Annie be able to convince Dylan to give their relationship chance? Will she find out about the threat Rabbit has made? Will she be able to bring Dylan closer to his dying father?  And will Dylan, who has never felt loved, be able to admit what he feels for Annie?

Whereas Everything I Left Unsaid was written in alternating POVs, Annie’s in first person and Dylan’s in third person, here in The Truth About Him it is Annie whose POV is presented in third person, while Dylan’s sections are narrated in first.

At first I really missed Annie’s narration, but I was glad to have more insight into Dylan. I also thought this POV structure was a fascinating choice. It makes some sense because the earlier book was largely about Annie’s emergence from an oppressive life, about her self-discovery and incipient freedom. Being in Annie’s headspace helped me understand and connect with all that.

Here, the focus is more on Dylan, and on his own struggle to free himself from his past – a much different past than Annie’s, but one that is a cage all the same. Dylan feels ensnared by his entanglement with the Skulls, and his love for Annie puts him at greater risk than he has experienced in a long time, even while it awakens him to a new happiness. This slow awakening in Dylan mirrors Annie’s in the first book, and is beautiful to see.

My biggest issue with the book had to do with Dylan’s decision not to tell Annie about the threat that Rabbit made against her right away. Yes, he had reasons (like wanting to give Annie time to recover from what had happened with Hoyt), but her life was on the line. Dylan should have immediately given Annie the opportunity to make her own decision about whether or not it was worthwhile to take the risk of staying at the trailer park to continue her life there and drive Ben to his chemo appointments. Fortunately this resolves itself relatively quickly.

“I’m not good enough for her” is one of my least favorite tropes in romance, so I wasn’t excited to see Dylan push Annie away because of it. But Dylan at least had stronger reasons than many heroes to feel this way, with Rabbit’s threat on Annie’s life and Dylan’s dangerous relatives looming over his relationship with Annie. Still, I was glad when another, deeper reason for the distance he took was revealed.

I was happy to have so much more insight into Dylan than I had from reading Everything I Left Unsaid, and I came to love him. For all that he thought of himself as a badass, for all that he had gone to juvenile detention center and even killed someone there, it was clear that in his family Dylan’s role was to be the good kid, the one who did his homework and tagged along after his “bad” older brother, as well as the one with all the potential to make it out of that life.

(Incidentally, I loved the way the motorcycle club trope was deconstructed – the MC in this book was in no way romanticized).

But making it out came with a price – that of cutting off his father and brother. Whereas in Everything I Left Unsaid, Dylan presented himself as a fortress, someone who didn’t allow himself to care, his interactions with Annie and those with Ben and Max reveal that under his surface indifference, Dylan cared a lot. That for all his outward strength, love made him vulnerable.

Annie is also vulnerable, and also strong, and probably still my favorite character in this two-book series. Even when she found herself in danger from Hoyt, she was never presented as anything but smart. The mistake she made that led Hoyt to find her was one almost anyone could make, so she never comes across as TSTL.

The commitment Annie made to Dylan at the end of the previous book — that when things with Hoyt were resolved, she would come back to Dylan — is one she sticks by even when Dylan doesn’t make it easy, but she’s no pushover, either.

Instead Annie gently prods Dylan into the kind of relationship he’s never had, desperately wants, and is scared of. And when Dylan keeps his distance from Ben, Annie doesn’t. She also continues her journey of discovering what she wants from her life now that neither her mother nor Hoyt is oppressing her, with encouragement from Dylan and occasionally others.

I loved the way this couple fit together, the way they understood each other, even when they lied or failed to communicate. The way they persisted and didn’t give up, even when the going got hard, as it sometimes does in all relationships. The way each gave the other a push when needed, the way each embraced the other’s needs, desires and flaws, and never pretended to be anything other than what they were: two survivors, bruised and scarred, but still standing.

The supporting characters were also wonderful, starting with the irascible Ben, who won me over despite having been a bad father to Dylan. Ben was protective of Annie and even of her relationship with Dylan when a rival for Annie’s affection turned up at the trailer park.

It was evident that Ben wanted a chance to apologize for his mistakes and to make what amends he could while he still had time. Even as I understood why Dylan found it hard to forgive him, I wanted to see these two achieve a new understanding.

I also forgave Tiffany, the battered wife and mother of three whom Annie had befriended, for her role in Hoyt’s arrival at Annie’s trailer. Tiffany had an about face that happened a bit too quickly to be fully convincing, but by the end of the book I had grown to like her.

There was an annoying continuity error in the ARC I read: When Dylan’s co-worker Blake, brother-in-law to Tiffany, shows up at the trailer park, Annie says she’s never met him before. But unless I’m misremembering, in the previous book Blake was the one Dylan sent to pick Annie up and take her to the mountain house when all hell broke loose at the trailer park. I hope this was corrected before the books went to print.

Blake’s appearance had the feel of sequel bait and although I wasn’t keen on him in this book, I’ll probably read a book about him if  one is published. But the character I most want to see more of in the future is Joan, Annie’s friend and erstwhile stripper at The Velvet Touch. Joan came across as world weary yet courting danger, dishonest but also a true friend. I fell in love with her in these two books and now I want more.

I had one small nitpick about something that was mentioned in the epilogue.

Annie reunites with Smith, the father figure Hoyt convinced her to turn her back on, when Dylan surprises her by flying him to meet her. I’m glad of the reunion, but after what went down between Annie and Smith, I felt she should have come to him, and not the other way around.