REVIEW: The Trouble with Valentine’s by Kelly Hunter

NOTE: Originally released as “Wife for a Week.”

As far as women’s fashion accessories went, he was spectacular. A black-haired, cobalt-eyed, dangerous- looking toy who no doubt warned you outright not to bother playing with him if you didn’t like his rules. He was like a Hermes handbag; women saw and women wanted, even though they knew the price was going to be
astronomical.

Hallie Bennett likes a challenge, though – and his offer is tempting: £5,000 if she pretends to be his wife for a week. It might not be the most traditional Valentine’s Day proposal… but she’s hardly a traditional girl. Maybe a week in the high life, with a man to match, will be just the ticket. Just as long as she doesn’t start wishing the ‘I do’ is real… “

When I saw this listed at Netgalley, it looked so cute that I jumped at the chance to read it. It wasn’t until I started it that I saw that it’s a reissue of one of your older books. That’s okay by me as I’d been meaning to delve into your backlist. Now having finished it, I can say that I love it. Except for one tiny thing. 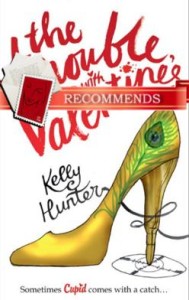 Hallie is such fun – talking to a shoe in her boring sales job and then giving Nick a setback as she doesn’t jump at the chance to be a pretend wife, complete with prepaid gorgeous wardrobe plus expenses and a sizable check, all for one week of work. Of course the sensory reeling kiss Nick lays on Hallie does even things up a bit… I love Hallie and Nick’s mother Clea doing intensive shopping and Nick needing the respite of a sports bar to recuperate from the experience – poor baby.

Usually I’m not one for “we’ve known each other for two weeks but by the end of the story we’re in lurve” but here I feel that it’s not just lust and hormones doing the talking. Not that those two things aren’t there jumping around all over the place but there’s so much more that satisfies me that these two are made for each other and can go the distance. Hallie, as Nick’s business partner says, is the type of person who can make friends with anyone and who makes anyone smile from the inside. Meanwhile Nick is honorable and, while he cooked up the whole scheme as a way to save himself from a relationship he imagined was more than it was, once he catches on to the truth of the matter he easily changes gears and shifts into viewing Jasmine as she really is. Then, Nick has the honesty to confess all to John Tey before signing on the dotted line.

The way Hallie interprets and deals with the situation with Jasmine shows Nick a lot about her. How she genuinely charms those around her and quickly adjusts reveals volumes about the type of kind person she is. Her response to the “morning after” and his offer of money plus her insistence on him telling John the truth shows her inner core of decency. I wasn’t sure how the “morning after” was going to play out but was pleasantly surprised that Nick immediately knows that his innocently meant offer hurt her though it was not intended to be cruel or dismissive of Hallie. He just f*cked up in his timing and made amends. Oh, and the sex had me laughing out loud – but in a good way, trust me.

The secondary romance was something I wasn’t expecting. At first I was leery of a young adult subplot but by the end I was won over. Jasmine is a down to earth young woman who is pretty sure she knows her own mind but is willing to wait to see and experience more of the world. Yet she’s also strong enough that I wouldn’t doubt she has a grasp of the situation and is probably right. If she can get two such pig headed men as her father and Kai to bend to her will, she’ll go far in life.

Despite this being a fairly short book, there is a lot of neat information about Hong Kong and Chinese culture that gets worked into the story. And not in a clunky “this is to remind you that the book is set in Hong Kong. Remember, Hong Kong!!” kind of way either. It’s all natural and there for a reason.

Things were going great when all of a sudden a seed planted early in the book sprouted, or should I say the whole group realized it sprouted. Hallie is horrified, the Teys and Kai are horrified, Nick is gobsmacked and all Hallie can initially say is, basically, “oops?” At first I thought it a little amusing and then it dawned on me that John Tey said that someone died because of this “seed.” And nothing was ever said about that. No reparations or even, “Gee, I’m sorry but I had no idea what I was doing and your loved one died for that.” It tainted the rest of the book for me.

I was so bummed about this last bit. The little bit that follows it is back to the spirited, delightfully, fizzy fun of most of the rest of the book. Hallie is obviously going to lead Nick on a merry chase throughout their marriage and heaven help him if and when their daughters start to arrive. The final scenes in Tiffanys (and I agree with Hallie that it’s only right for him to make her feel truly appreciated with a nice little bauble for her) and the celebration of Clea’s impending grandmotherhood while catching up with the Teys and Kai (John’s gift to Nick is inspired) had me laughing again with glee but I couldn’t get that “seed” outcome out of my mind. B+