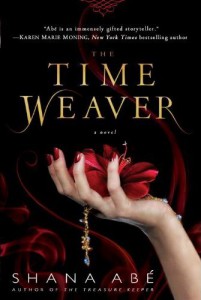 I have been a big fan of your drakon series since reading the first book,  The Smoke Thief. The most recent and fourth book,  The Treasure Keeper, was really the first book in the series that disappointed me. The relationship between the hero and heroine was greatly hampered by the fact that the hero was (sort of) a ghost through most of the book, and I had some problems with the ending. Still, I did give the book a B.

The Time Weaver opens with a series of letters that the heroine, Honor, has sent to her past self. Honor Carlisle is a drakon of Darkfrith, but like most of the female drakon of the clan, she does not have the abilities that males have, of turning to smoke and then to dragon form. Honor has another Gift, though – one that seems unique to her. She can “weave” through time – essentially, time travel. At first she is shocked and confused by her ability, and is not able to exercise much control over it. As she grows older, she does learn to control her Gift somewhat; she’s able to determine the place and time she wants to weave to, though there are still limitations. Once she’s visited a time and place, she can’t go back there, no matter how hard she tries (and due to events that occur in the course of the book, she tries very hard). And she still doesn’t have much control over when she weaves back to her original time and place – she has a couple of seconds warning, in the form of physical sensations, but that’s about it.

Because of her Gift, and the letters she is able to write and then hide for her younger self to find,  a teenaged Honor is aware that a man will be coming to steal her away from Darkfrith, and that she is to go with him. He is Zane, the hero of book two in the series,  The Dream Thief. Zane is a human who is married to Lia Langford, daughter of the alpha of Darkfrith and one of the few female drakon who can Turn. Lia has another Gift – she can see the future. The things she has seen convince her that she needs to get Honor out of Darkfrith for her own protection and the good of the clan (more on that later).

The drakon of Darkfrith  have lived in isolation and secrecy for centuries, long believing themselves to be the only of their kind left in the world. In the course of the series, they have discovered that this is not quite the case – there is another clan of  drakon in Eastern Europe, in a stronghold called  Zaharen Yce. Prince Alexandru of the  Zaharen has ruled from a young age, and he’s had to be ruthless in order to hold off alternate claims to his throne. In addition to his drakon abilities, Sandu has another Gift – that of being able to read someone’s true thoughts through their written words. This is useful to him after Honor begins to weave to him at random times over the course of several years – he asks her on one visit to write something for him, and is able to determine that she is his destined mate from her written words.

There have been tensions between the drakon of Darkfrith and those of Zaharen Yce since they discovered each other. The drakon are inherently savage beneath their human exteriors, and the drakon of Darkfrith, in particular, tend to view anyone outside their clan as a threat. For that reason, there has been a sort of silent war going on between the two groups for a while now, in spite of the fact that Sandu’s sister, the Princess Maricara, has married into the Darkfrith alpha family.

Besides the threat that each group represents to the other, both groups of drakon are hunted by the sanf inimicus, a shadowy human group whose mission is to, literally, slay dragons. The events  at the end of the previous book and in  this book shed some surprising light on the motives of the sanf inimicus, at least in their present incarnation.

One thing this book really crystallized for me is the darkness of the drakon series. These aren’t feel-good, HEA romances. They aren’t cheesy paranormals in the J.R. Ward tradition (where bad things definitely happen, but the overall tenor is so campy one doesn’t take it too seriously). As noted before, the drakon are not like you and me. I had issues with the very first book in the series due to the  hero’s heavy-handedness with the heroine; she was a “runner” – one who had fled Darkfrith, a crime for which the typical punishment is execution. The heroine of  The Smoke Thief isn’t executed (the series isn’t that dark), but she’s forced back under the dominion of the hero in a very definite way. I felt sympathy for her desire for autonomy and resentment over what I saw as the hero’s oppression of her. I generally prefer slightly gentler “battle of the sexes” romances, where the hero eventually learns to give a bit. It was Janine who  pointed out to me that the drakon’s insistence on absolute secrecy and isolation was self-protective and for the good of the clan as a whole. Autonomy meant destruction to them. Put that way, I couldn’t argue, but I didn’t have to like it.

My point is that you’ve created a world where the stakes really are high; the drakon have to be ruthless. But even beyond that, there are glimpses throughout the series of the village of Darkfrith and its inhabitants and there is a certain cold cruelty that seems to mark the characters of these people. Animals cannot bear to be around them, sensing the savagery beneath the beautiful glittering surface they present. In a sense, these aren’t characters one warms up to; they just aren’t human enough to completely love and empathize with. But they are fascinating.

It’s the prose that really shines for me in these books – you have a knack for writing lyrical, evocative prose that is never (or at least very rarely) over the top, which I think is quite a feat (at least for me as a reader; often “lyrical” prose feels self-conscious and unnatural to me and pulls me out of the story).

There were aspects of the story I found confusing and unclear, though it may just be me. As I noted earlier, Honor was taken from Darkfrith because Lia’s visions dictated that she should be. But I’m not clear on what Lia’s plan was or what fate she was trying to avoid. There is a vision of Lia’s depicted in which Honor is in danger, but I don’t understand how kidnapping her from Darkfrith was supposed to avoid that fate (here it gets a little confusing because of Honor’s time weaving; there are things that essentially “happened” – Lia has seen them and they effect Future Honor’s actions, but in the linear storyline they don’t actually occur). I’m also not sure why Lia couldn’t warn Honor about the threats she was facing, or which version of Future Honor sent the letters back to herself. Some of the letters seem unnecessarily cryptic and I can’t tell if they come from realities that end up changing. (Which is in and of itself confusing; if the future changes, there are things that happen even in the previous book that would not happen, if I’m understanding the whole thing correctly. Which I might not be. Time travel is hard.)

l also don’t understand the resolution that is developed to avoid all-out disastrous warfare between the dragons of Darkfrith and those of Zaharen Yce, but it may have to do with the nature of the drakon; they aren’t quite human, after all, and can’t be reasoned with as humans could be. If that figures into it, I think I just needed it spelled out a bit more explicitly.

The resolution itself is a bit bittersweet, as well as open-ended. Again, these aren’t romances with traditional HEAs where everything ends up wrapped up in a neat little package and all the characters are happy. Even as the hero and heroine get what they want, there is loss and sacrifice involved.

Over all, this was a satisfying end to the series, if indeed it is the end. I was pleased that this book explained the genesis of the out-of-nowhere villain that appeared at the end of  The Treasure Keeper. Though I retain my disappointment with that ending, it was kind of neat to see how things came together in this book. There are still loose ends – actually, a few new loose ends were created in The Time Weaver. There is some business about how Honor’s time travel is wearing on her; she suffers progressively worse nosebleeds and headaches afterwards. I never figured out the significance of that and it seemed like it was dropped as an issue. Similarly, there were several mysterious mentions of Honor disappearing and losing time as a teenager – once being gone from Lia and Zane’s for 10 months, and returning with no memory of where she’d been or that time had passed –   that weren’t resolved or explained. To a degree, I think the loose ends work though – they give the story a sort of depth and grittiness that it benefits from.

My grade for The Time Weaver is a high B+. I’m very much looking forward to what you write next.

→ Jennie
Previous article: REVIEW: His at Night by Sherry Thomas
Next Post: The Reader Responsibility to Author Direction