The year is 1927. As rains swell the Mississippi, the mighty river threatens to burst its banks and engulf all in its path, including federal revenue agent Ted Ingersoll and his partner, Ham Johnson. Arriving in the tiny hamlet of Hobnob, Mississippi, to investigate the disappearance of two fellow agents on the trail of a local bootlegger, they unexpectedly find an abandoned baby boy at a crime scene.

An orphan raised by nuns, Ingersoll is determined to find the infant a home, a search that leads him to Dixie Clay Holliver. A lonely woman married too young to a charming and sometimes violent philanderer, Dixie Clay has lost her only child to illness and is powerless to resist this second chance at motherhood. From the moment they meet, Ingersoll and Dixie Clay are drawn to each other. He has no idea that she’s the best bootlegger in the county and may be connected to the missing agents. And while he seems kind and gentle, Dixie Clay knows he is the enemy and must not be trusted.

Then a deadly new peril arises, endangering them all. A saboteur, hired by rich New Orleans bankers eager to protect their city, is planning to dynamite the levee and flood Hobnob, where the river bends precariously. Now, with time running out, Ingersoll, Ham, and Dixie Clay must make desperate choices, choices that will radically transform their lives-if they survive.

Hot Coffee, MS and Toad Suck, AR – those town names make Hobnob practically normal, don’t they? Promise me something different in a blurb and I’m Pavlov’s dog in a heartbeat. So when I read the set up and the time frame of this novel I knew I had to try it. 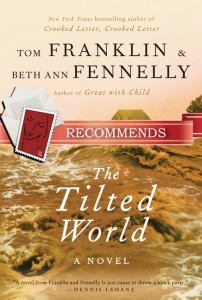 The writing is fairly smoothly knit together for two people having a hand in it. Kind of reminds me of the old Sergeann Golon Angelique novels in that way. I couldn’t really tell where one person’s input ended and another began. The writing style might drive some people nuts with short and/or incomplete sentences but since I write that way myself, it didn’t bother me.

1927 Mississippi comes alive in all its insular, redneck, rural bootlegging glory. I say this as a daughter of the South so please don’t think I’m being snooty. There are good things about it and some awful aspects that rear up and smack you. The mind frame of the people there is what I’d expect so be prepared for words and expressions not used in polite company anymore. But for these people to have spoken and thought otherwise would also be wrong and papering over the ugliness of it.

I love the fact that Dixie Clay is the bootlegger and also that she makes the best illegal whiskey that Ham and Ingersoll, along with most folks around Hobnob, have ever tasted. Dixie Clay is an artiste of whiskey. Meanwhile Ingersoll is among the best agents, second only to Ham Johnson as Ham will no doubt expansively tell you, in the business of busting illegal hootch production. He and Ham are unbribable and determined to find out what happened to the missing agents and to stop anyone from trying to breech the levee holding back the angry, flooding Mississippi River.

The romance is a slow and gentle falling in love. Ingersoll thinks that someone as pretty and smart as Dixie Clay would never have fallen for him without first having her romantic dreams soured by Jesse. He’s the type, thinks Dixie Clay, who gets more handsome as the years go by and who she just knew would come after her once the river burst over the levee and the world was flooded. They show their love by what they do and how they act rather than with fancy phrases.

I enjoyed stepping back in time to when booze was illegal, women wore hats and gloves, men had just recently fought in the Great War and automobiles were still a bit of a novelty in the rural South. Dixie Clay and Tom started the book resigned to lives of quiet, unfulfilled dreams but end up with a family and a future and I loved watching them get there. B+