Your bestselling science fiction novel translated from Chinese to English by author Ken Liu, The Three Body Problem, caught my attention shortly after its publication in the US last summer. 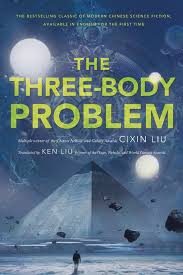 After reading the kindle sample and the cover blurb (the latter contains big spoilers), I was both fearful of the subject matter yet intrigued by the setting. I had the sense that it might be unsettling and that it might be exciting and fresh, and as it turned out, both were true.

The Three Body Problem begins during China’s Cultural Revolution, when Ye Wenjie witnesses the interrogation and subsequent killing of her father, a professor of theoretical physics who refuses to denounce the scientific principles he teaches. Even Ye’s mother turns on her husband to save her own skin.

Ye, who trained as an astrophysicist herself, is sent to the Greater Khingan Mountains as part of the Production and Construction Corps effort to harvest the trees that grow there. To speak out against the deforestation is a political risk, but a man named Bai Mulin, a reporter for the corps’ newspaper, is determined to do so.

Bai shares a copy of Rachel Carson’s Silent Spring with Ye, and after reading it, Ye concludes that “It was impossible to expect a moral awakening from humankind itself” and that to achieve it “would require a force outside the human race.”

But just when Ye thinks she is about to be prosecuted to the fullest extent, she is instead flown by helicopter to Red Coast, a military base near her old post. It turns out that the government is working on a secret project there, and Ye’s knowledge of astrophysics makes her an ideal candidate for a position at the base.

The chief engineer at Red Coast, Yang Weining, a former graduate student of her father’s, warns Ye that the job is no great opportunity. Due to her political status, he says, it’s possible that if she signs on, she’ll never be able to leave Red Coast base. Still, Ye signs on.

The novel then moves forward in time some forty years. We meet Wang Miao, a nanomaterials scientist who is asked by a rather rude police captain, Shi Qiang, to join the Battle Command Center. Wang is puzzled; he’s not aware of China’s involvement in any war.

At a meeting of the group, Wang encounters military officers, police, academics, as well as British and American participants. Wang learns that several prominent scientists, famous for their physics research, have recently been killed. Among them is Yang Dong, a brilliant superstring researcher Wang once met and was taken with.

Now it appears that Yang Dong has taken her own life, leaving behind a note tying her decision to her belief that “Physics has never existed, and will never exist.” Wang agrees to infilitrate a group called the Frontiers of Science, which many of the dead scientists were connected to.

Shortly after this, Wang experiences a very odd phenomenon. While devloping the photographs he took with his Leica, he spots a different number on each picture. Taken together, the numbers add up to a countdown. A frantic Wang has his wife and young son take pictures with the same camera, but their own photos contain no such numbers. When Wang borrows his neighbor’s digital camera and snaps a shot himself, the numbers reappear.

The countdown gives 1200 hours, but until what? Wang calls Shen Yufei, the woman in charge of the Frontiers of Science group, and she invites him to her home. Once there, Wang notices that Shen is playing a virtual reality game. The game’s URL is 3body.net, and Wang memorizes it in order to pass it on to the Battle Command Center.

Shen Yufei advises Wang to stop his nanomaterials research if he wants the countdown to go away. That night, Wang begins to see the countdown against the sky. When Wang halts his research, it does indeed disappear.

A stressed and upset Wang decides to investigate the virtual reality game. In the world of the game, there is no dependable pattern to the sun’s rise and fall. Days can go by without sunlight, while at other times, the sun can become so hot that people burst into flames. At still other times, the sun’s pattern becomes predictable, and those are referred to as stable eras. Then inevitably the pattern is disrupted, changing back to “chaotic eras.”

What is the connection between the countdown, the game, and Ye Wenjie’s tenure at Red Coast Base? What are Wang and the other members of the Battle Command Center dealing with? Is it true that physics has never existed, and what does Yang Dong’s statement that this is so mean for the human race?

The Three Body Problem is a novel of ideas, and many of them are fascinating idea. There’s the puzzle prestented by the game Wang Miao becomes obsessed with – how can you predict anything, even the next sunrise, in a chaotic world?

Then there is the question of what happens to our own world if the laws of physics turn out to be a sham. The novel also examines good and evil, and looks at Ye Wenjie’s desire for a moral awakening in humankind from mulitple angles.

Amazing technological feats are not only attempted by the characters, but also achieved, from Wang’s nanotech filaments to an astonishing computer that has to be read about to be conceived of. These inventions are truly fascinating, some of the coolest things about the book.

The science in the novel never feels gratuitous, but serves the story at all times. That makes the scientific explanations all the more compelling and absorbing to read.

Ye Wenjie is a fully realized, multi dimensional character with an impressive arc. It is so easy to sympathize with her when her father is killed in front of her eyes, and the book uses that sympathy to take us on quite a journey.

The other characters are flatter, and I wonder how much of that is due to the novel’s structure and pacing, which require Wang to jump back and forth from the world of the game to his own world, making one discovery after another with little downtime. In the middle portion of the novel, which is where this happens, Wang and those he encounters begin to feel like devices to introduce readers to the book’s ideas, rather than like fully fleshed out people.

But even though they weren’t as well-devleoped as Ye, I liked Wang, Shi Qiang, and the deceased Yang Dong’s bereaved boyfriend, Ding Yi, enough to be invested in their fates. And a couple of the characters who only made brief appearances, like Shen Yufei’s husband, Wei Cheng, had intriguing stories of their own.

Your writing, as translated by Ken Liu, is both spare and haunting, the story told in an omniscient voice that gives it a sense of inevitability. There are some eerie passages, especially in the scenes set in Ye Wenjie’s past and in those that take place when Wang is playing the Three Body game. Here’s an example of one of the latter:

The sun briskly moved to the west, revealing the sky behind it. It soon fell below the horizon, and the ground seemed to rise against the brilliant wall this time. A dazzling sunset swiftly turned to night, as though a pair of giant hands had pulled a black cloth over a world that had turned to ash.

I wasn’t completely convinced of one important aspect of the story:

That alien civilizations would rise and fall not only once but nearly two hundred times in what was clearly a hostile environment. It seems unlikely that sentient life would evolve on such a planet to begin with.

But this is part of the premise, so I was willing to go with it, as unlikely as it seemed.

A profile in The New Yorker described your books as ones in which “romantic sweetness is balanced with harsh objectivity.” In this novel that harsh objectivity made for an unsettling, even anxiety-inducing reading experience. The novel had moments of hopefulness, but that was countervailed by some characters’ thoughts and actions which bordered on nihilistic.

This is not necessarily a negative; as a friend pointed out, good SF is often at least slightly disturbing. But my appreciation of the book’s many wonderful qualities is tempered by my feeling that it was more unsettling than I can easily handle. B/B+.