REVIEW: The Tenant of Wildfell Hall by Anne Bronte 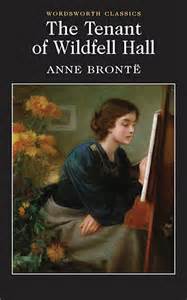 I’ve been making my way through the Bronte sisters’ oeuvre for the past couple of years; for the longest time I’d only read Jane Eyre (in school, originally). Then I dove into the big bowl of crazy that was Wuthering Heights, before taking the suggestion of readers that Anne’s quiet realism was an antidote to Emily’s lurid and twisted imagination, and picking up Agnes Grey.That book was just alright in my view; it wasn’t bad but the first person narrator was kind of dull and sanctimonious. Still, I again listened to readers who said that The Tenant of Wildfell Hall was a good deal better than Agnes Grey, and decided to continue the great Bronte experiment with this book. I’m glad I did.

The novel begins with a framing device (those Brontes loved their framing devices!): Gilbert Markham writes his friend about the mysterious widow who has moved into the neighborhood with her young son. Helen Graham paints and resists attempts from her neighbors to know her better. Despite her standoffish attitude, she and Gilbert form an attachment; Gilbert also becomes a friend to her young son Arthur. Rumors fly about Helen, spread by a spurned love interest of Gilbert’s. He finds himself torn by jealousy and frustration; Helen won’t let him court her and resists his romantic advances. When he accuses her of loving another man, Helen gives Gilbert her diaries, which explain the truth of her circumstances. Most of the rest of the story is then told by Helen, as narrated in those diaries.

The truth is that Helen isn’t a widow at all; she has fled her profligate husband and is essentially in hiding with her son. The diaries trace her early infatuation with Arthur Huntingdon, a handsome and witty man whom her aunt cautions her against (Helen was raised by her aunt and uncle). Despite her aunt’s warnings, Helen much prefers the charismatic Huntingdon to her other dull suitors. She knows that he has bad habits and is not as devout as she is (and that’s putting it mildly), but she thinks she can reform him. (A sentiment that is no doubt familiar to female readers since time immemorial.)

As her diaries go on to show, Helen’s living in Delusionville, and the Truth Train’s about to choo choo on through. Not only is Huntingdon reform-proof, he actually gets worse over time. Both his increased drinking and the birth of his son (of whom he’s alternately jealous and ruinously over-indulgent) serve to blacken Huntingdon’s already tarnished character. His low point comes when he carries on an affair at a house party the Huntingdons hold, more or less right in front of Helen and the woman’s browbeaten husband. Huntingdon is definitely the type of character whose bad behavior builds upon itself. It’s almost like the worse he acts, the worse he feels like he has to act, in order to top himself.

Certain aspects of The Tenant of Wildfell Hall really were a bit shocking to me, or rather they were shocking coming from a 19th century novel written by a woman. The depiction of Huntingdon’s affair, while exceedingly tame by today’s standards, felt unusually frank for a book published in 1848. The book is considered by some readers to be an early example of a feminist novel; it was condemned by many at the time it was published for its alleged “coarseness.” I’m at a loss, though, as to how any reader could believe that the depiction of debauchery in The Tenant of Wildfell Hall amounts in any way to an endorsement of said debauchery.

My view is that the main moral intention of the novel was to show young women the dangers of marrying impetuously (it’s a theme Bronte returns to several times, as when Helen counsels friends about their own romantic travails). As such, I can see it being received badly; mostly male critics would not like the implied criticism of their bad habits. It’s not stated explicitly but it’s nonetheless made quite clear just how powerless Helen is in her marriage; her first attempt to gather a nest egg and flee Arthur on her own is found out and brutally quashed. She eventually has to enlist the aid of her brother, which just drives home the point that women of the era were helpless without some sort of male sponsorship.

Helen is indeed admirable as a feminist heroine. She reminds me a bit of Jane in Jane Eyre; she has a sense of self and of morality that is inviolable. She commits the scandalous act of actually fleeing her husband, something readers today will not judge her for, but I’m guessing some readers did when the book was published. (She does it mostly to save her son from becoming a wastrel like his father, but still.)

Huntington is undoubtedly a villain, but he has some dimension. The structure of the novel doesn’t really allow for much of an understanding of why he is the way he is, but he presents as a spoiled child who has always had sufficient charm, looks and money to get what he wants, and who has never had to grow up and learn to focus on someone other than himself. At least in Helen’s view, he just doesn’t seem to want very much to be good; he can’t be bothered. Her goodness seems to irritate him, perhaps pricking at the tiny bit of conscience he has left.

Later in the book, it becomes clear that Huntingdon is an alcoholic, as well as given to other vices (possibly opium, definitely overeating and womanizing). Still, it’s hard not to feel a bit of pity for him in the end, on his deathbed (uh, sorry, spoiler, I guess) – he is terrified of dying but won’t accept the comfort that Helen offers by repenting his sins.

(Incidentally, it’s thought that the character of Huntingdon was based on Branwell Bronte, the Bronte sisters’ only brother. Branwell was a dissolute who died at 31, probably of tuberculosis exacerbated by his drinking problem.)

To the degree that The Tenant of Wildfell Hall works as a romance, one big sticking point is the hero – Gilbert. He’s better than Huntingdon, sure, but he’s not great. Markham comes off in his own first-person account as childish, petulant and given to lashing out (he attacks Helen’s brother at one point, thinking him her lover, and when he realizes the truth, his apology is insufficient and sullenly given, IMO – especially considering that he actually does real injury to Lawrence). It was hard to see what Helen saw in him, except that he wasn’t Huntingtdon.

Helen herself is most interesting as a character early in her own writings, when she is first drawn to Huntingdon. She’s a good person, but young enough to be somewhat foolish. She convinces herself that she can reform the bad boy because she wants the bad boy; he’s so much more interesting than her other uninspiring marital options. By late in her marriage, she’s developed a pious streak that can be a tiny bit off-putting. Still, her saintliness is never too irritating (even when it defies belief) because it lacks the martyrish aspect that is so present in many a goody-goody heroine. Furthermore, she’s not naive (at least not after a few months of marriage to Huntingdon); she’s just extremely firm (to the point of stubbornness) in her beliefs.

So, my grade for The Tenant of Wildfell Hall is a B+. What next? I think I still have Villette,  Shirley and The Professor, all by Charlotte, to go in my Bronte-a-thon.